Referee Rumblings: Maps at the table.

Referee Rumblings are going a series of posts on my personal style as a referee of RPGs. Observations and tips on refereeing RPGs for the past 30 years. With a particular focus on the fantasy genre.

Prompted by comments by Alex and Timeshadow on my Kensla post yesterday I am going to talk about using maps in front of players.

I was a geography minor in college and the big emphasize of the curriculum was using maps to convey information. Done the right way they can shortcut minutes of verbal or written description.

In addition I was (and still am) a big fan of Harn. Harn had a three map system. The first map was color and had only a few important and obvious features labeled. The second was the same as the first but greyscale for photocopying. The last was a greyscale version that was keyed for the referee only.

The idea is that you show the players the color version when they arrived at the locale. If they want to take note you hand a photocopy of the greyscale version. During play (or prep) you refer to the keyed version.

The player map does not have complete information. It represents the general sense of a site that can be gathered when first journeying there.

I immediately adapted this to my own Majestic Wilderlands and used it ever since. It saves a lot of time describing locales to players. For stuff that is off the cuff I will sketch a quick line and block map on the whiteboard.

Understand this doesn't take away from the mystery of a locale. To the players is looks like a bit of a terrain and bunch of white blocks. What in those blocks is still a mystery.

As for getting lost in a city. Just about every group I ever ran knows the right hand method of running through a maze. Plus medieval cities are not that big. Within game minutes it is not that hard getting back to a main street.

Below is the map I used for City State. Until a encounter requires the battlemat this map lies in front of the players with tokens or figures representing the locations of the various party members. 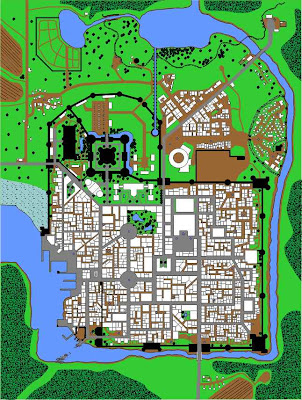 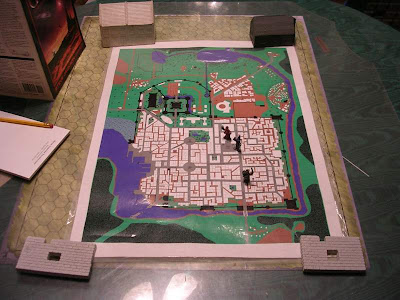 What I use in my DM's notebook. 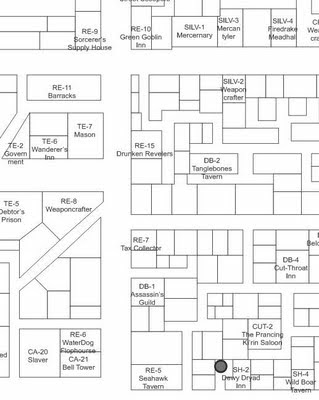 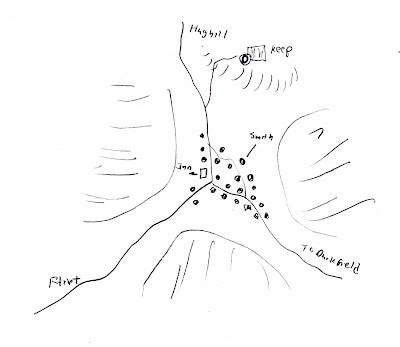 The scribbles are cropland.

The key thing to remember is that the map you show players to cut down on your verbal description doesn't have to be the same map that behind your screen. Nor do you have to do a map every time if you don't think it will save you time or convey the information any faster.
Posted by Robert Conley at 6:00 AM

I admire your hard work.
--I wouldn't have the patience to construct three maps, nor would most players I have met care enough to make it worth my while.

I'm glad someone does this level of detail, and so nicely, too. :D

I posted about the use of map myself lately, and one thing I wondered about was how to use maps in play. You actually have your players point where they are and place a mini? You also really have an alley by alley map where you read off where they are and can see all the time? I'd love to see or hear how that works out in play. It seems very slow to me.

Amen about your philosophy behind why people like us use maps. If thirty seconds of quick sketching saves three minutes of describing how everything and everybody in the room is related spatially, then go for it.

Having the city map and using the minis seems like a good idea if for no other reason than it gives the group a good large view of their environment. If you are playing sandbox-style, it saves the DM and players a considerable amount of time otherwise spent explaining every left-turn and alley in town. I am guessing details such as shop names can be filled in as characters take the initiative to ask about such things.