This is the fourth in a series detailing the 34 steps I recommended for making a Fantasy Sandbox Campaign. Today's post will cover the following steps.

Now for some decisions one what is here. I know the island is part of the Kingdom of Isle which is one of the Eainian Kingdoms. When setting up the geography I left the southern part of the island open. So it there I put in the various settlements.

I put a castle (the solid black dot) a couple of hamlets (triangles), and a village (diamond) around the eastern bay. I think I going to have some dwarves and halflings invited in so I put a village next to the small foothill in the southern bay and another village on the river on the south shore. 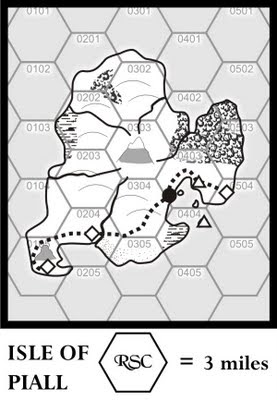 Now a couple of Lairs. It is an island so it definitely going to need some sea encounters so a I sprinkle a couple of those. One in the forest looks good then two on the relatively uninhabited western side. 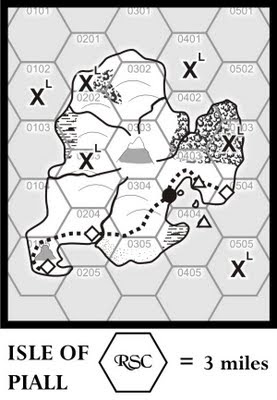 Now for the ruins. The big mountain in the middle is going to get one likely a dungeon of some sort. Something in the ocean off of the south shore likely a ship wreck. Then then two more in the interior. Likely I will make them related to the central mountain ruins some how. 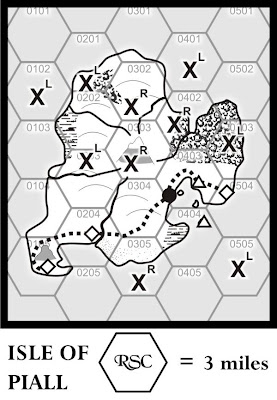 Because of the small map I am cramped so the number of locales is a bit dense. But that will work for this exercise. I try to sprinkle everything so there is a nice even spread throughout the map. The only clump of stuff is around the eastern bay.

Settlements are in a hierarchy. Villages are the most common followed by towns and then cities.

The major metropolis of a setting would have the four hex nearly packed with villages and market villages along with daily caravan or convoy bringing in the surplus food for several hundred miles around. Rome had grain shipments coming in as far as Egypt.

Now most fantasy cities are often closer to the wilderness. Using "realistic" figures would result in the cities being surrounded by carefully manicured fields for dozens of miles around. I often justify cutting the historical figures by adopting the 20% rule. A fantasy society is a lot like a medieval but it is 20% better because of magic. Less disease, more food, better clothings. While the use of magic isn't spectacular the combined effect of all the magic-users and cleric result in a society that more prosperous than what existed in our own world. This means that the shear number of manor, latifunda, and farm needed to support your fantasy metropolis can be cut to a more manageable number.

The maps on this post are good examples of I how place settlements.

That it for Part IV, tomorrow is Part V.
Posted by Robert Conley at 6:00 AM

This is pretty much where my current project is, so I'm looking forward to the future of this series. I may have some questions as we go along, so I hope you don't mind if I bring them up here. :)

Thanks for demonstrating this for us,
Flynn

Fire away that why I have it on a blog so there is feedback and people going back and forth.

I honestly think 3 miles per hex is WAY too small of a scale. I prefer "zooming in" when I map and giving my players more to do in a smaller space. Usually, I'll do squares (not hexes) and they'll be 1 mile per inch. This gives me a lot of room to plant LOTS of little things in there and helps space those things apart.

Another thing I do is create a small portion of the map I know the players are going to start in, and then build OUT from there. It saves me a lot of time not having to plan things that the PCs aren't going to encounter for a long while and lets me devote that time to making the areas they ARE going to encounter fruitful with interesting locations to plunder.

Should towns have villages in the hexes around them as well?

Hi i was wondering what you would reccomend i would mark borders with between kingdoms please.

@Craig, I would use a thick dashed line about 4 points.

For color maps I use deep purple as the border color.