This is the second in a series detailing the 34 steps I recommended for making a Fantasy Sandbox Campaign. Today's post will cover the following steps.

2. Label important regions
3. Write one page of background giving no more than a handful of sentences to each region.
4. Pick an area roughly 200 miles by 150 miles

First I start by labeling some important geographical features. I am not going to spend a whole of time naming everything. I am going to focus on a small area first. But it helps to have something named for consistency and later expansion. 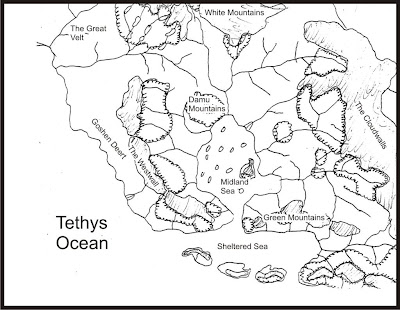 Now I need to do a one page background of this area. To do that I need to get an idea of who lives here and how this all came about. First thing I think of is that I want a really big cataclysm to have happened. I came up with the following.

Pretty severe change probably best to have it happened a thousand years ago otherwise I would have a desolate interior.

At this point I am sure you are seeing all my nice computer generated graphics. You do NOT have to do this. You should take your base map and make six to dozen photocopies and scribbled notes.

Also you going to see an elaborate step by step evolution of the region's history. Again you would be doing this (as I do) on your photocopies sketching here, making notes there, erasing and doing new notes.

Soon I have lost the point of the exercise. What I do instead is sketch out a series of basic historical maps. Then write my history off of them. It allows you to see the big picture of your timeline in a very graphical and condensed format. Again I did these on my computer so you see clearly what I am doing. Normally I just be scribbling on paper.


So I start by placing where I want the races to be. I am going to go for a World of Greyhawk style here with distinct realms for everybody. Like Greyhawk the humans will be driving the dynamics of the time.

For my initial human culture I am going to call them Aegyptus. Yes I know not the most incredibly imaginative name. I am think tho that at some point I like to run the Desert of Desolation series of AD&D modules and I want a good place for them.

The Aegyptians delve too deep into magic and cause their fertile river valley in the midst of the Goshen Desert to drive. Two group migrate one to the northwest and the other to the southwest. There they establish the lands of Illyria.

There they expanded throughout the Sheltered Sea and got into more than a few fights with the demi-human realms. 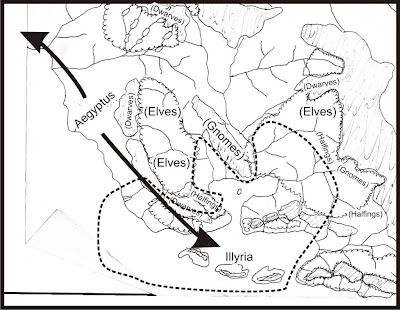 Now I am a big fan of migrations and cultures clashing. And what better way to cause trouble than to have a new nation of humans migrate right into the Illyrian. I figure that the NW group of Aegyptians cause a bunch of trouble to the west. This lead to a large group of tribes called teh Eainians to migrate east. They ran into the Illyrian Empire and taking advantage of a civil war proceeded to crushed.

The Illyrians were shattered into competing city-state and lost everything except for some large islands in the Sheltered See and the southern end of the western peninsula.

Th Eainian tribes eventually consolidated into the Five Kingdoms Lor, Canberra, Bastam, Vandenberg, and Nemedia. They also had fairly good relations with the demi-humans. Allying with them at various times during the Illyrian Wars. 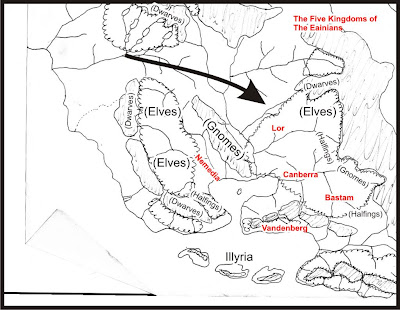 Well unfortunately for the Eainians history doesn't end. I going to for the cliche Dark Lord. He is a Illyrian mage who turned to evil during the Illyrian Wars. He eventually wound up in the far north which was the home of number humanoid tribes like kobolds, goblins, orcs, bugbears, ogres, etc. By his wit and charisma he unites the tribes.

In preparation for the invasion he creates the Cataclysm shattering the heartlands of the Five Kingdoms. The invasion is almost a footnote. In the wake of destruction and war the Dark Empire is established and put the free people of the land under the yoke.

The only ones who remain free are the demi human realms using the Westwall and the Cloudwall as a bastion. And the Kingdom of Vandenberg who fortify the Green Mountains and maintain to hold off the onslaught of the Dark Lord. 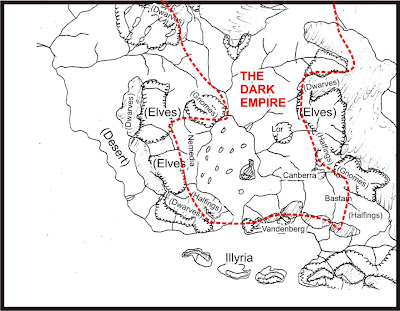 Inspired by the newly formed United Church of Delaquain, Sarrath, Thoth, and Veritas, Vandenberg becomes the core of the Renaissance. Delaquain is the Goddess of Honor and Justice. Sarrath is the Dragon God of War and Order. Thoth is the god of wisdom and knowledge. Veritas is the god of truth and law.

With the demi-humans as their allies they advance northward against the Dark Empire. It takes three centuries but the Dark Lord was killed and his Empire shattered. In it's wake Vandenberg is reborn as the Eainian Empire.

The Eainian Empire golden age last for two centuries. But it's heart, the United Church was a fragile alliance of gods. Eventually greed and the lust for power overshadowed duty and honor; civil war and religious strife stalked the Empire.

Whole regions declared independence which in turns suffered their own wars. The Eainian Empire shrunk back onto Vandenberg where it came under the sway of the Church of Sarrath and was renamed the Ochre Empire in the Dragon God's honor.

Now a thousand years after the Cataclysm the land is a patchwork quilt of realms dreaming of past glory. A few realms like the Empire of Po have turned from the past and now looking forward. 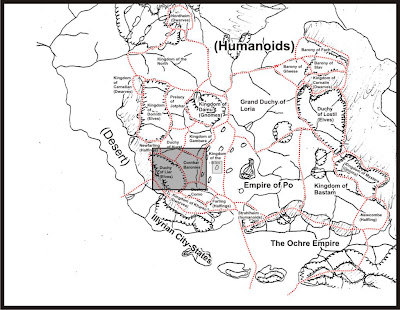 So now I have a basic region with a history, some geography, and a lot of realms. In the above map I highlighted a large rectangular area. This is about how large the recommended campaign would look on this map.

However for the purpose of these posts I am going to detail a slightly smaller area. I do want the result to be useful to you guys after we are done so I am going to look for something fairly self contained. A large island in the Kingdom of the Isles looks about right. You can see it marked to the right of the large rectangular area.

That it for Part II. In Part III we will take that island and draw ourselves a proper numbered hex map. I will be attending Sibcon in Butler PA on Saturday the 19th so Part III will be out on Monday.
Posted by Robert Conley at 6:00 AM

How long do you take to come up with this amount of info as you work through the steps? So, for Part I - how long to sketch the original map? Then for II, map versions, then history blurbs, etc?

I Just linked on my blog your new series under "SANDBOX IN DETAIL" tag, and you didn't tagged second post such way. Thanx in advance for adding such cosmetic thing. :)

It should take no more than an evening. It can be really crude and crappy looking. Just as long as it is dark enough for you to photocopy (or scan and then print).

The map versions you can spend one or two evenings on. Depends on how in depth you want to go. Once you get a sense of how history goes then you just start glossing stuff over.

Notice I didn't put up a map of the Eainian Empire. Not important at this point. It is enough to know it covered the surviving areas of the Five Kingdoms.

Even the final step I didn't have to do in such detail I just could have focused on the Kingdom of the Isles and it neighbors.

But then you may want to fill in the present day in some detail so you can figure out which area is the most interesting for your sandbox.

@Ojciec got it fixed thanks for pointing it out.