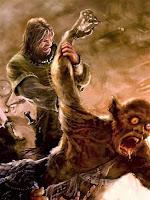 Doug's project already funded however further support will allow him to pay for a ebook layout and full color art. I hope you will support him.
Posted by Robert Conley at 3:52 PM No comments: