Over on Grognardia there have been some interesting discussion on professional versus hobbyists. Along with I talked with a OSR gamer on Google chat about his ideas for publishing. My advice to him was that If you think that you can sell a 100 copies then the hobby time you spend on making your idea publishable will be well spent.

A perfect storm combining the Internet, Print on Demand, and Desktop Publishing has driven the cost of publishing to all time low. The cost of doing a project is pretty much down to the time you are willing to spend.

The 2,748 in the title of this post is the total I earned from my self-published works. All but $200 of that from Majestic Wilderlands. This is over two years since December of 2009.

For Blackmarsh, I only earned around $200, but I have had over 1,724 downloads. Which is pretty much what I intended when I decided to release the whole thing under the OGL. With Delving Deeper coming out soon even more people will have Blackmarsh in their hands.

The only reason I didn't earn more was I haven't completed the projects I been working on. Partly due to my procrastination and partly due a busier schedule due to my family's activities.  I make progress, just not very fast.

The only caveat in all this is that it is still takes work and patience. You need to advertise yourself either by blogging or maintaining a steady output. While straightforward publishing is not easy, but it is not particularly hard. The nice thing is that if you get a good reputation then it easily becomes a hobby that pays for itself.  You may not get to go to Tahati as Zak mentioned but you will some extra bucks to
spend.
Posted by Robert Conley at 6:00 AM 3 comments:

Since I published the Majestic Wilderlands, I ran several campaigns using Swords & Wizardry Core. In one of my campaigns the players are starting a point where they can create and buy magic items. One of the things I done is brought over the details of magic when I ran the Majestic Wilderlands using GURPS and other systems. My style since refereeing AD&D in the early 80s has been that Magic Items can be bought and sold. I always treated it similar to historical trading in luxury items. Low power items can be bought in shops catering to the wealthy, while the rest have to be commissioned or bought at elite auctions.

My previous price lists were based on the power levels of various magic item in the system I was using (GURPS, Fantasy Hero, D&D 3.X, etc). And now I am working on a list that reflects Swords & Wizardry. It doesn't need to be exact in the ballpark is just fine. I would like to get folk's opinions on what I come up with so far.

I am currently working on Weapons and Armors

All of this is going to be incorporated into a follow-on to the Majestic Wilderlands I am calling the Lost Book of Magic. After I finish Scourge of the Demon Wolf and some maps for Tim of Gothridge Manor I will start working on it.
Posted by Robert Conley at 2:20 PM 3 comments:

Additional reflections on the OSR and older edition D&D.

James Maliszewski over on Grognardia is spot on with his post on the OSR and older edition D&D.

Everytime I see this come up, like on the theRPGsite, I point out the OSR is what it is. Because of it's grassroots origins, the OSR reflects the desires of gamers not the business plans of companies. And the simple fact is that most old school gamers prefer an older edition D&D over other RPGs.

As one of the commentators pointed out many of the other popular old school RPGs are still supported by active publishers. This takes away a lot of the reasons for a grassroots movement to form around those games. And explains why the OSR is so overwhelmingly focused on older edition D&D.

And other commentators point out that large segments of the OSR are involved in preserving other older edition games.  Some are involved in creating new games for different genres designed to appeal to old school gamers. Mutant Future, and Stars without Number are two of many examples.

The nice things about all of this is that because of it's foundation on the Open Game License there is very little to stop anybody from publishing what interests them. In addition the expansion of the OSR has lead to opportunities to buy original games from their copyright holders and release them for the current generation of gamers. Spacemen & Spaceships from Goblinoid Games is an example of this.
Posted by Robert Conley at 1:54 PM No comments:

Ars Magica by Atlas Games has been a major influence over the nuts and bolts of magic in the Majestic Wilderlands. Mostly because it describes a easily understandable and gamable culture of magic-users. The I only used a few of the mechanics of magic from Ars Magica and one of them is the Dominion.The Dominion
As powerful as magic-users are they pale against the divine power of the gods. In various holy (and unholy) places the local mana has been altered to only respond to those who have faith in a deity’s religion. Magic-users has labeled this phenomenon as the Dominion. This is represented as a penalty to the caster level for all magic-user spells including those associated with that deity. If the caster level drops below 1, then spells can only be cast through a ritual or with an item. The dominion levels do not add together. Take the highest one that applies.

Region dominated by a single religion may be considered a holy ground for that religion.

In the present day of the Wilderlands, the following regions are noted for their dominions.

The dominion of Mitra in the Principality of Lenap has faded due the corruption of Mitra’s church in the region. What remains is strongest in rural villages where it still can be found at a -1 modifier. For a different reasons, the dominions of Mitra in Tarantis and Nomar have disappeared. The influx of Skandians invading both realms has changed the local population to the point that the land is no longer dominated by those following Mitra.

In the Sarnia the dominion of Hamakhis nearly faded due to incessant wars between the city-states. The temples became corrupt due to politics and factional conflict. But it was renewed several centuries ago by the reformers of the Order of Pegana.

A dominion of Dannu appeared in the Limerick Shire after the fall of the elven kingdom of Silverwoods four centuries ago. Many attribute this to the halflings remarkable efforts in creating a safe haven for refugees of al races trying to escape the chaos of that time period. Their continued work in keeping the peace between the races has caused Dannu’s dominion to persist to the present.

The Viridians of Viridistan never had a dominion and in the past actively worked to destroy the traces of any that appeared by killing the populace. Today with the empire torn apart in civil war, adherents of all the major religions of the Wilderlands are adventuring to rid any remnant of the Viridians and their demonic influence.
Posted by Robert Conley at 9:35 AM No comments:

Other kinds of Sandbox

Currently I am running a one player GURPS Campaign with Dwayne of Gamer's Closet. Dwayne recently listened to the Game of Thrones audio book and liked it a lot. He came to me to see if I could come up with a campaign where he got to play a knight. Luckily I have an area of the Majestic Wilderlands that is perfect for this. Nomar my "Arthur" land. Instead of focusing on the myth of Arthur, I will focus on the politics. That in conjunction with recent events of my setting should produce something that gives the feel of Game of Thrones but has it own unique situation.

During my prep I discovered something interesting. While knowing the geography and locale was useful of far more importance was the roster of NPCs. The campaign was going to be a sandbox but it wasn't going to be about wandering from place to place. But instead it was more likely it was going to be more about going from people to people.

I am still developing my thoughts on this but here is one of the background documents I developed for the campaign. It details the regions of Nomar focusing on the nobles. Currently I am working fleshing Dwayne's family and I will post later on that. Here the link to the maps to make sense of the writeup.
Posted by Robert Conley at 6:00 AM 3 comments:

Two weeks ago I walked into the Gold Star Anime to setup for my weekly Majestic Wilderlands game (Swords & Wizardry) when I find this. 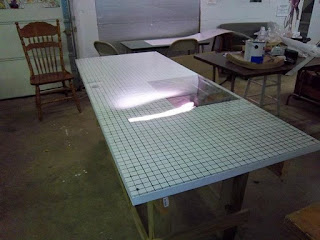 Jerry, the owner of Gold Star Anime, has built three gaming tables with plexiglass tops. He has one with 1" inch squares, another with 1" hexes, and a third one with 1.5" squares for Heroclix and other miniature games. It was really cool of him to do this and proved very useful during the game. Not only for drawing out the battle map but also gave me a place to write down NPC Hit Points and other useful info.

There facebook page is here where they post upcoming events. I am there every Wednesday from 7:30pm to around 10:00pm and play a monthly Saturday game. The next Saturday game is on November 19th.
Posted by Robert Conley at 6:00 AM 4 comments: