First I appreciate everybody's support! I wasn't expecting the amount of traffic and that the outstanding amount would be covered in only three days. I was going by past sales and I figured on triple the normal traffic. Instead, I got way more. Thanks and appreciate the business.

What is still available?

I also have Stuff in the Attic. It is packed with a bunch of free downloads some of which probably should been released in their own right like Merchant Adventures.

So now that the Judges Guild license is over with, what is next for me and Bat in the Attic Games?

I am fortunate in that prior to getting the Judges Guild license in 2009, I was working on a new setting that was built around the material that is original to me. Folks saw parts of this as Points of Light, Points of Light II, the Sunrise Sea from Goodman Games, and as well as my own Blackmarsh. Originally I was going to call it Lands of Adventures, but now it going to be the Majestic Fantasy Realms. 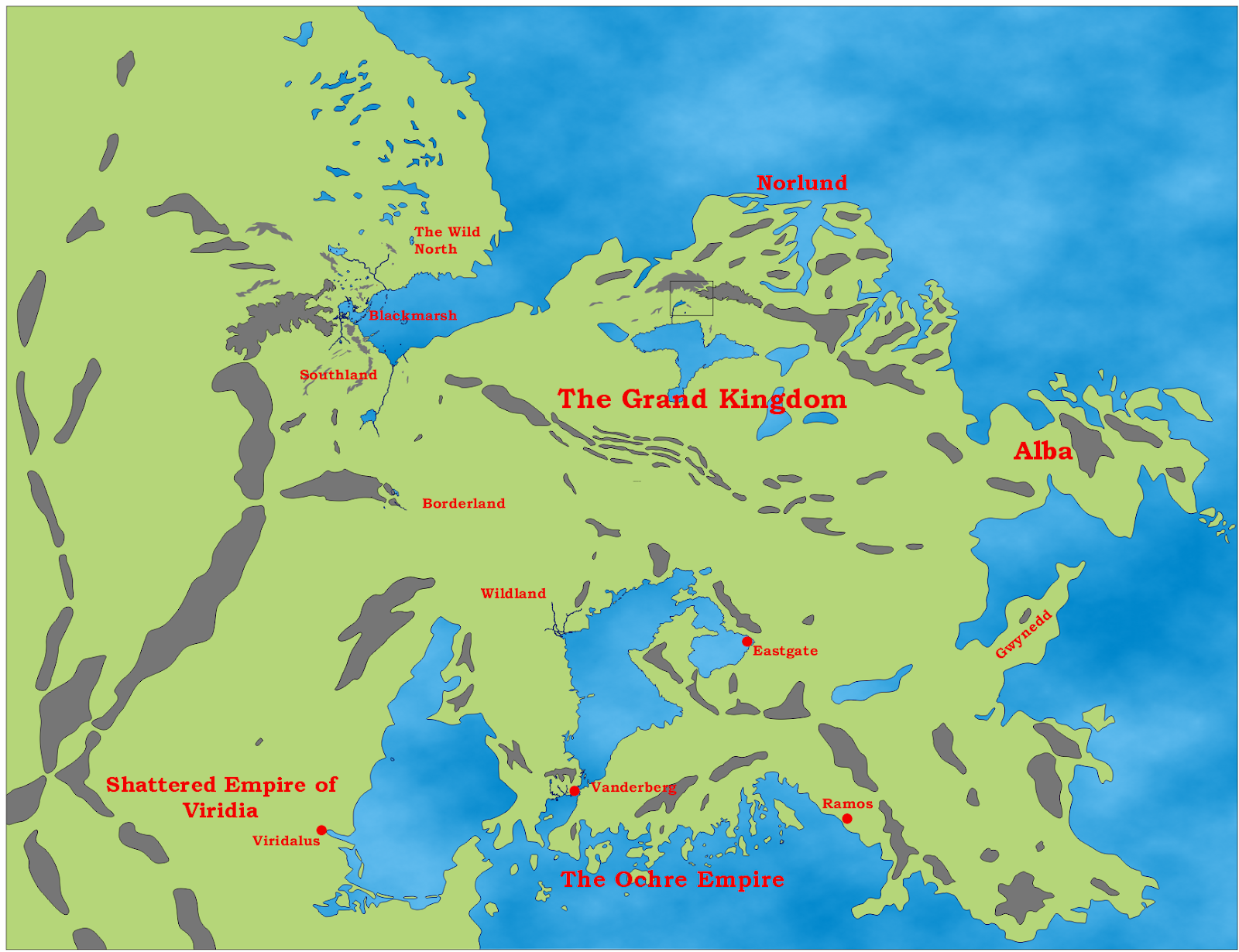 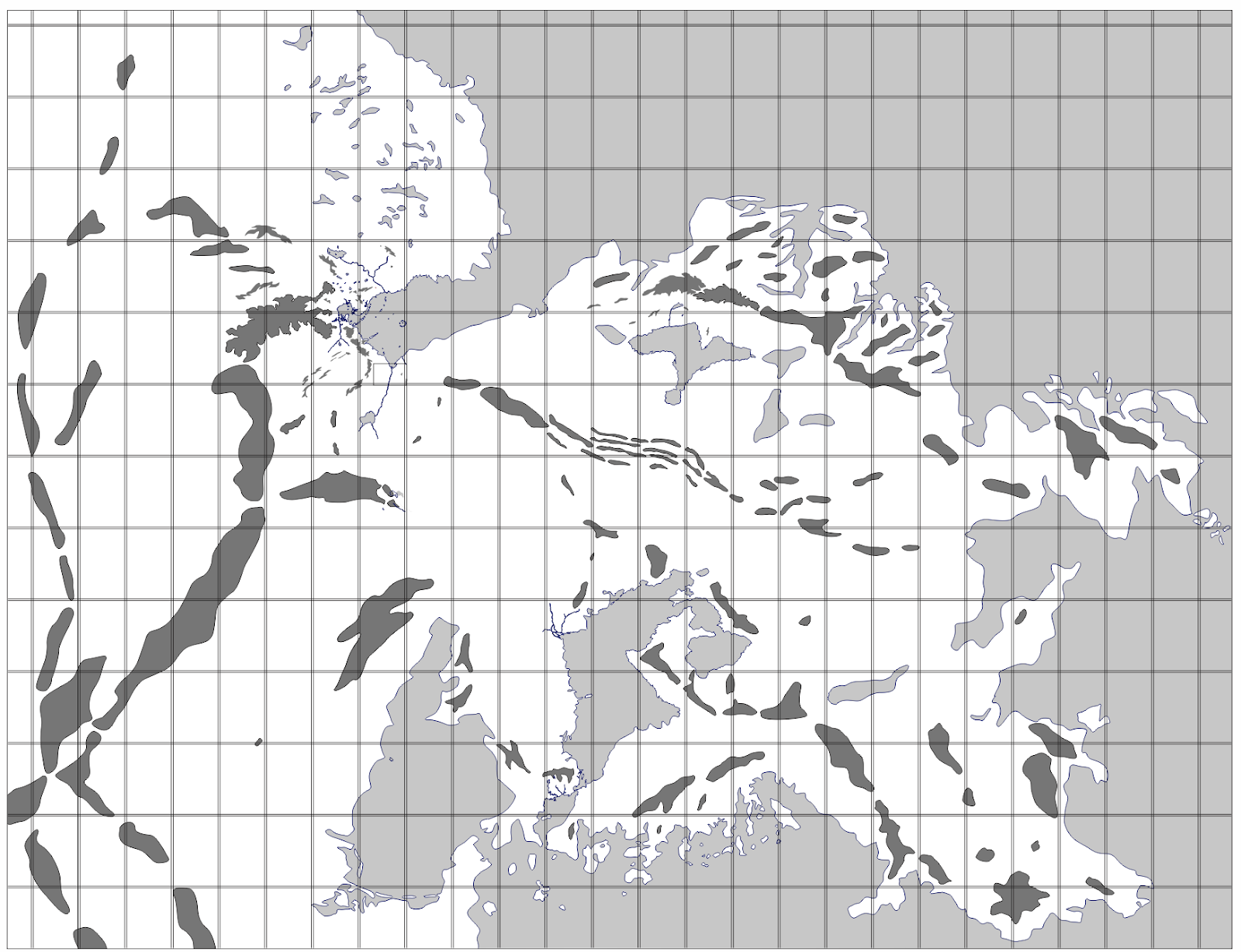 This map is roughly the size of the continent of Flaness in the World of Greyhawk. It has a 5 mile grid at full print size (roughly 3/8" per hex). The advantage of this will mean that all maps will align perfectly with each other.

While I have a sketch and notes on the details of the different regions. I will be building this piecemeal at first. Basically in four map sets. When I get a couple of these done, I will probably release a World of Greyhawk style folio covering the entire setting from a high-level view. The firs

I am doing this to keep the focus on local level detail, the part that matters for most campaigns.  Each map campaign set of four maps covers a region 300 miles by 400 miles. Enough to keep a campaign going for several levels.

The first four maps will be released as Into the Majestic Fantasy Realms and it is the main focus at this time. I am about halfway done with the writing and shooting for a fall release. 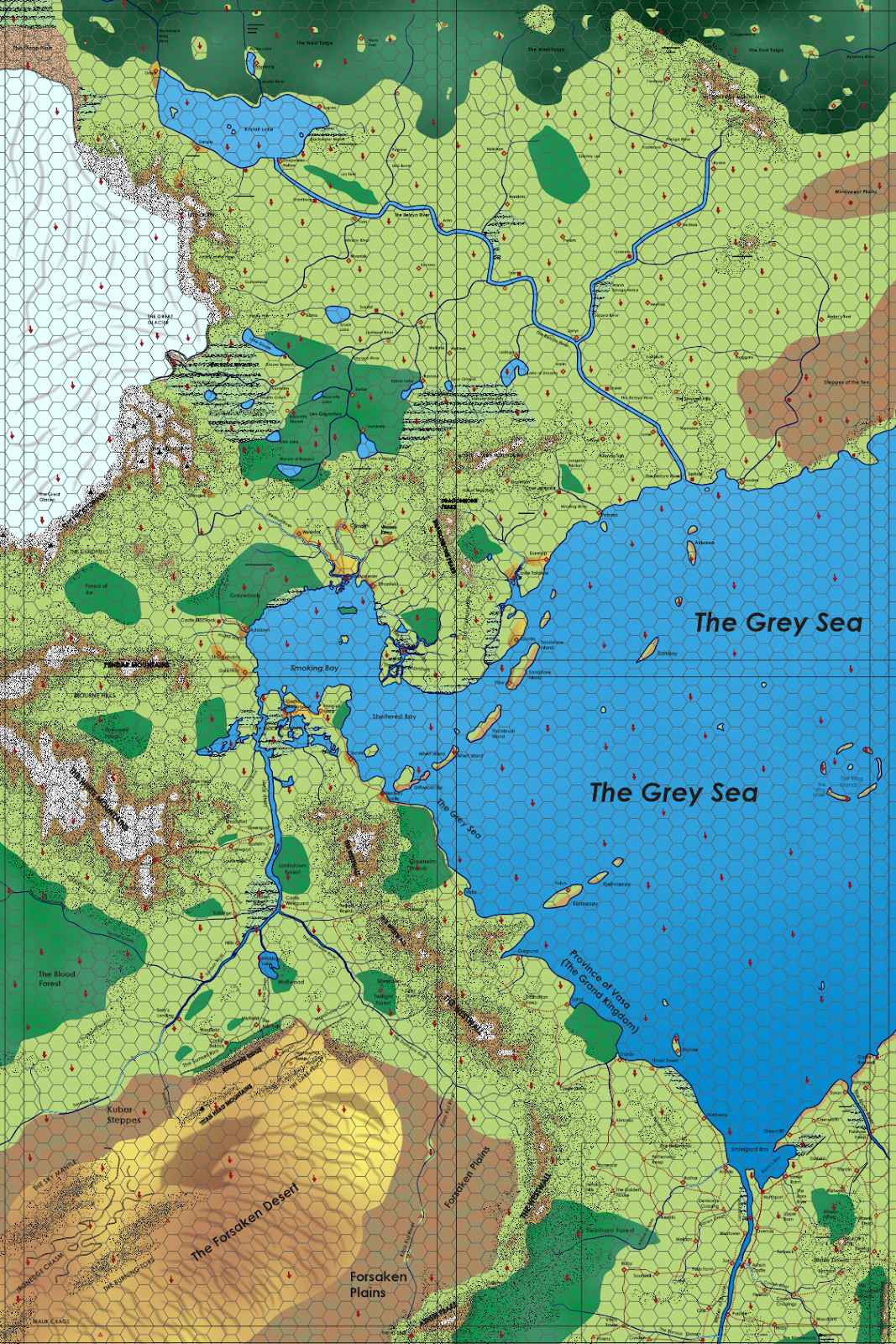 Some close up views 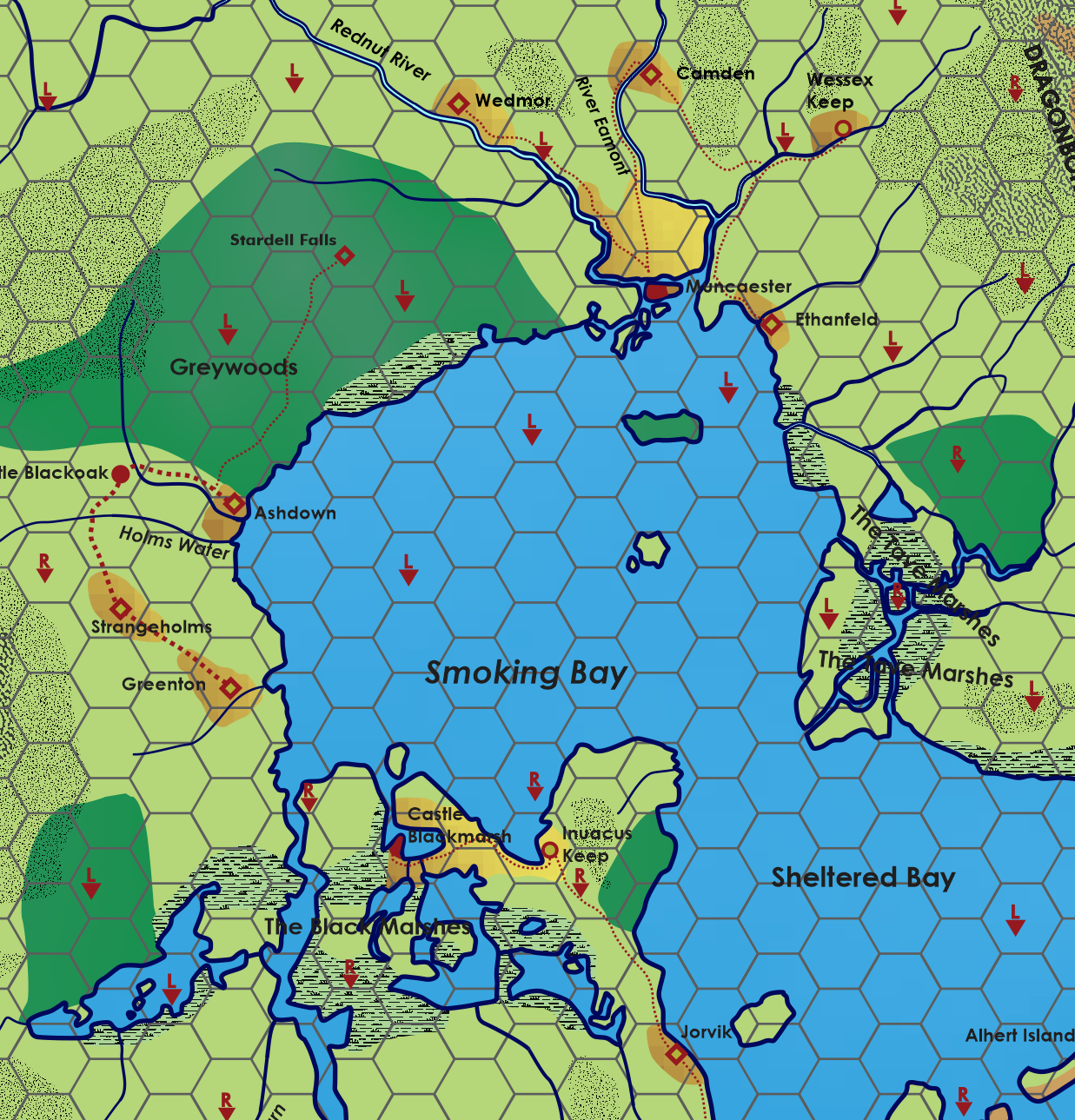 Currently, Into the Majestic Fantasy Realms will have 10 12" by 18" map sheets. Four referee maps, four player maps, and an additional one or two maps with town maps. Along with a guide book for the four maps. Each map will have an overall background and details on Terrain, Islands, Lairs, and Settlements keyed by hex number. 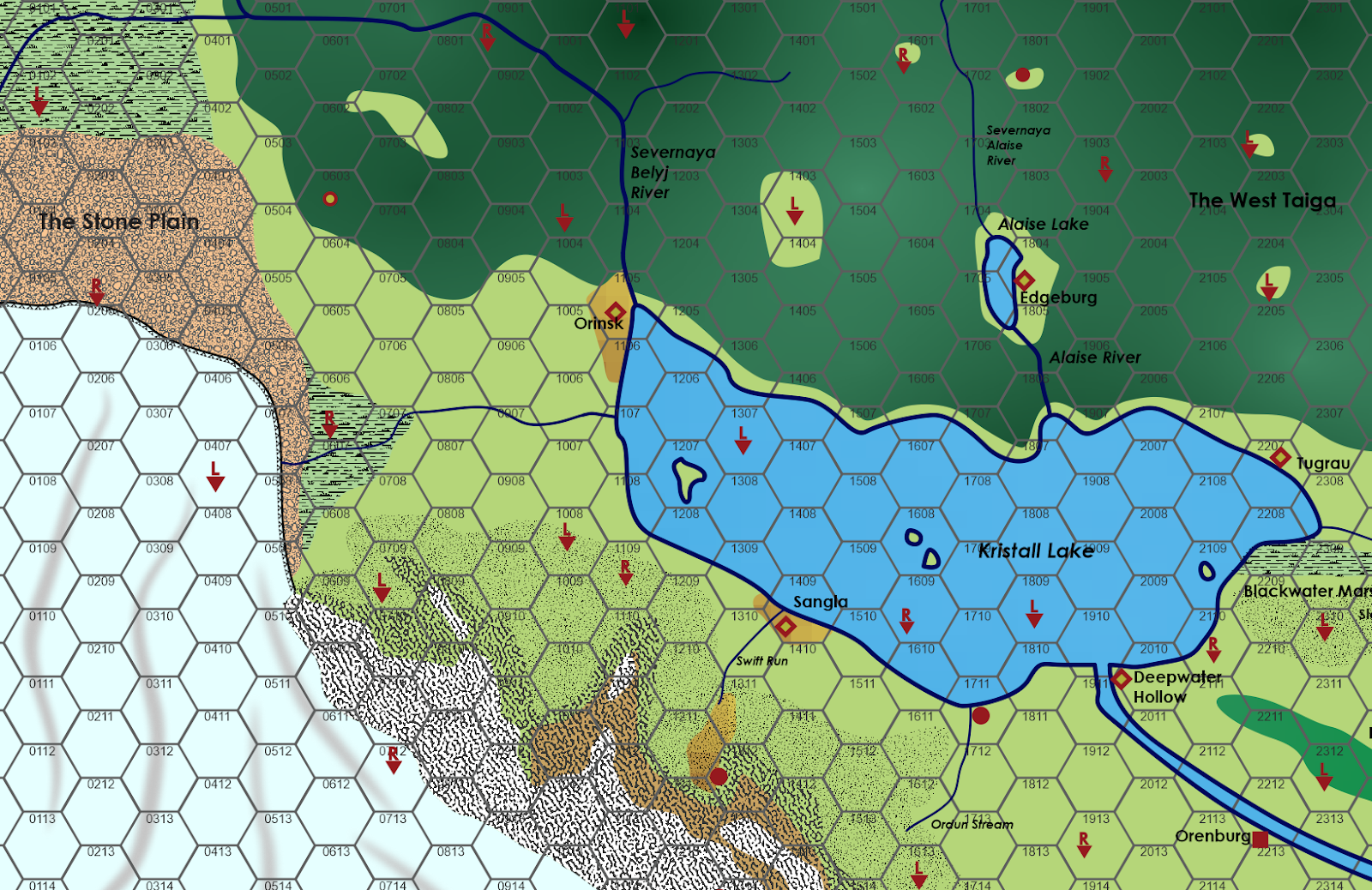 Again thanks for your support. Below is a brief list of what I have planned in the order that they will be released.

Concerning Judges Guild, To All Things an End

UPDATE!
I appreciate the outpouring of support and patronage. As of 7:00pm eastern time, the amount of deferred royalties is enough to pay off the outstanding balance Judges Guild owes on the Wilderlands maps done by myself for the City-State Kickstarter. Accordingly, I have ceased sales of all Judges Guild licensed products.  A follow-up post will be up tomorrow. Again thank you.
Rob's Note: For what I will be doing next please see Concerning Bat in the Attic, Voyages into Strange New Worlds.

Currently, I have three main product lines two of which are produced under a license from Judges Guild. For a long time, I had a good relationship with Robert Bledsaw II, the son of Bob Bledsaw one of the founders of Judges Guild, and the current owner of the IP.
In February of 2020, I learned that Robert Bledsaw II was making unacceptable social media posts after which I no longer wished to continue to have a business relationship with Judges Guild. The details of this can be read in the following two posts along with the sources they reference.
Concerning Judges Guild
Concerning Judges Guild, Further Development
The problem I faced was that I was owed a substantial amount of money for the work I had done on mapping the Wilderlands of High Fantasy as a result of the issues surrounding the City-State Kickstarter. Prior to this, in March of 2018, it was resolved by Robert Bledsaw II offering to forgo his royalties until it was paid. I agreed to this and until 2020 it was working out nicely.
With much of the outstanding balance remaining, I decided not to end sales of the Majestic Wilderlands or the Judges Guild Wilderlands remakes. I did inform Robert Bledsaw II that I would no longer be producing any new Majestic Wilderlands products or asking to make another remake. That when the outstanding balance was paid, I will cease sales of all Judges Guild licensed products.
Right now the outstanding balance is less than $90. With royalty percentage for Judges Guild and DriveThruRPG percentage of sales, this is roughly around $1,500 worth of licensed products. Normally three months at the current rate of sales for me. I am aware that once I announce that sales are ending that there will be a last-minute rush. So I decided long ago that when the outstanding balance got this low that I would make the announcement then.
Accordingly, I will end sales of all Judges Guild licensed products by Monday, August 21st, 2022. That will give those interested two weekends in August to decide. It will end early if I reach $1,500 worth of sales. I apologize if this last point creates a gold rush mentality. Personally I intensely dislike sales gimmicks. Given the circumstances, it is what I am willing to do.
Wrapping it up
Going forward I will be making another post concerning Bat in the Attic Games and the status of the projects I have been working on.

As for the situation with Judges Guild and the behavior of Robert Bledsaw II, I will let my actions speak for themselves. I will only add that subsequent events have confirmed for me that I made the right choice in this matter.

There are two issues surrounding Judges Guild, the personal behavior of Robert Bledsaw II, and the business situation regarding the City-State Kickstarter. The reasons why both are still issues in 2022 are why I feel pursuing the Majestic Fantasy Realms and other original projects is the best course of action for me going forward.

I appreciate the support everybody has given and your kind words. Thank you for the feedback on my works and honored that you would buy my products. There is more to come that I think you will useful and above all fun!
Posted by Robert Conley at 1:03 PM 15 comments: 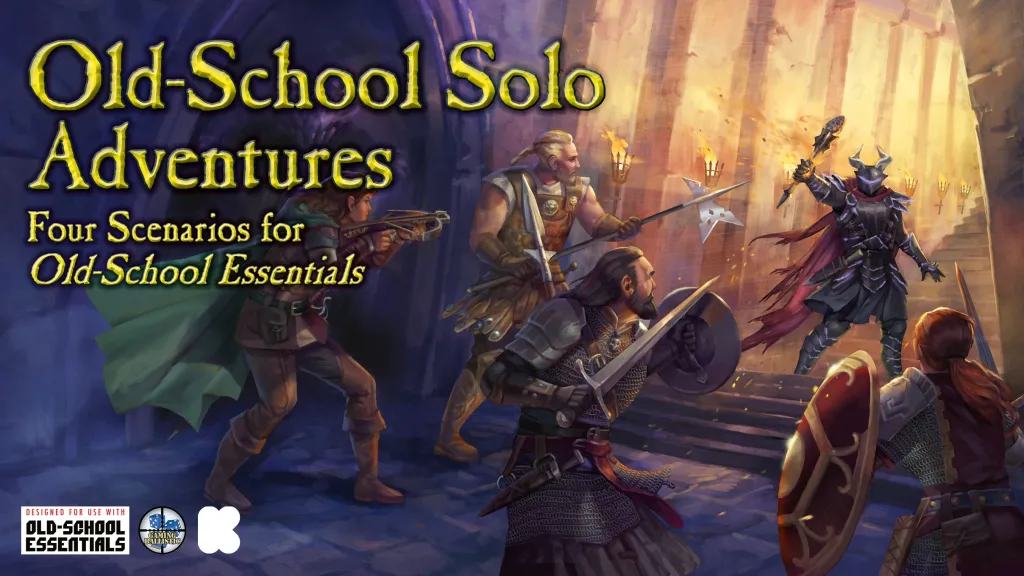 The Fantasy Trip by Steve Jackson Games has a long tradition of offering solo adventures like Death Test. When Douglas Cole of Gaming Ballistic secured a 3PP license for TFT he and his authors continued that tradition with their own series of adventures.

Now he and his team of authors did the work into making these adventures compatible with Old School Essentials. Given that OSE is a hop and skip from a dozen other classic editions and close clones these adventures can be used by a wide variety of OSR systems.

He has started a Kickstarter to fund the printing and final work on these adventures.

I was given Til Death do Us Part to try and I found it fun and interesting to play out. Its replayability is good as there are multiple paths with multiple outcomes to explore. I think leveraging the TFT community's experience with solo adventures  is a great idea and will create a fun niche for classic edition hobbyists to play with between sessions and campaigns.