Douglas Cole of Gaming Ballistic is having another GURPS related kickstarter. This time it is a bestiary for his Nordlond setting for the Dungeon Fantasy RPG. Nordlond as setting is centered around the culture of Norse Vikings. Normally a RPG supplement like this is fairly setting specific. Some of the creature that Doug has preview have norse origins. But he also repurposes many common DnD style fantasy monsters give them a viking twist. Making this work useful for expanding the number of creature the referee has for a Dungeon Fantasy or GURPS campaign.

The Dungeon Fantasy RPG is purposefully generic: It is Powered by GURPS, after all. The Norðlond setting is not generic, borrowing from the literary tradition of the Viking culture. The sagas of looting, pillaging, and raiding for wealth and fame made a natural match for a game with a tag-line of “Smash Evil for Fun and Profit.”

Even with that in mind, the monsters here can be—and should be—repurposed and transplanted to other campaigns. Many of them are thinly disguised transplants from other cosmologies anyway: The nautamaðr is clearly based on the Minotaur; the Blóðughúfa, or “bloody hat” is the redcap, a fixture of Northumbrian folklore, perhaps derived or parallel to the Irish fear dearg, meaning “red man,” said to wear a red coat and cap.  Animals—normal, giant, and dire—don’t require any work to move between campaigns. Much as the player characters pillage loot, GMs should pillage the worked examples here to make their lives easier when running games in any campaign.

My view that this type of work for GURPS needs to be support and encourage. GURPS is great as a toolkit however it needs the same range of support as other similar types of RPGs for referee who don't have the time to sift through all the options. The Nordlond bestiary helps a lot with this.

The Nordlond Bestiary also has a enemies section of NPC characters to use in a campaign.

He is always trying new things. For example a project creating stock art that allows you to mix and match different elements to create science fiction art.

His latest kickstarter is also about something different, Uncommon Monstrosities It offers 3D model files suitable for 3D printing but with the miniatures sculpted in JE Shields' distinctive style.

I think it is a neat idea. With 3D printing becoming more popular I figured that folks to know about this. Recently I made some figures with Heroforge and paid for a couple of stl files. A friend of the mind, Josh, had a 3D printer and made the models. The results were acceptable. 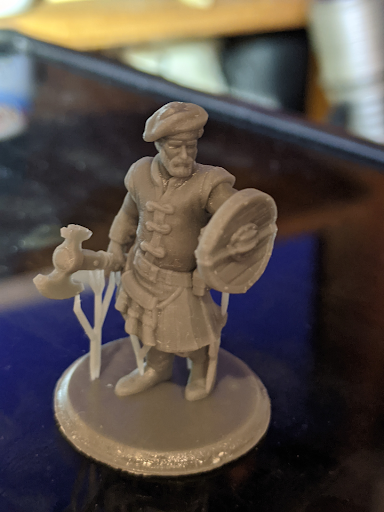 Yeah I know the shield is bent weirdly but having the rest of the mini exactly how I wanted it was great. The shield issue resulted because you have to consider proper support when the model is printed partway. Anyway thank to Josh for printing this for me! I am in the midst of painting them and will show them off once I am done.

Best of luck to James and his Uncommon Monstrosities kickstarter  and hope it works out great!

Posted by Robert Conley at 9:50 AM No comments: