A Fantasy Sandbox in Detail Part I

This is the first in a series detailing the 34 steps I recommended for making a Fantasy Sandbox Campaign. Today's post will cover the following step.

You can just grab an 11 by 8.5 sheet paper and start sketching away. Or you do a ton of research into climate, oceanography, and tectonics and do some serious world building. If you are into that then I recommend this free download e A Magical Society: Guide to Mapping by Expeditious Retreat Press. It distills the relevant science into a easy to digest format.

If want a little realism but not have to wade through so much stuff I recommend remember the following three things. 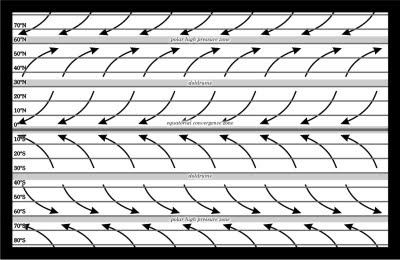 Above is an idealized map of air circulating around a sphere like the earth. In reality things are more complex but here we are just worried about gaming reality. Each line of latitude is about 69 miles. Typically I just make a nice even number like 60 miles. For this particular sandbox I am going with 80 miles per degree. Each 5 degree ban represent 400 miles.

The key features are at the equator, 30 degrees, and 60 degrees. In order

The Equator is typically a low pressure area with frequent but mild storms.

At 30 degrees North and South are the dolrums. Here the wind dies down. Your major deserts will be found along this band. It is also a barrier to sea travel.

Between 30 degree and 60 degrees are the temperate zone with winds coming out of the west.

The 60 degree band is another storm band and it is far more severe then the equator. Cold air masses from the poles will break off here and travel from west to east. On the eastern side of a continent, where this band crosses from land to sea is a major storm zone as weather from the west can hit weather carried by the current coming up from further south. (See the Perfect Storm).

The polar zone are cold with winds coming from the east.

When you draw your maps remember that mountains have a rain shadow effect. On the side where the wind is coming from it will be wet. On the other side it will be drier. If it in the Doldrum it may be barren desert stretching for hundreds of miles from the other side.

Just draw your map and superimpose the above graphics to get an idea of how things will look.

You can get away with some odd climate by remembering the monsoon effect. Any time you have a body of water that goes north-south with land at the high latitude end you are going to get monsoon weather. What happens is that during summer the land heats up driving down the air pressure. This sucks moisture from the body of water which travels north (or south until it reaches lands where it dumps everything.

Then in autumn it can reverse as the land cools forming a high pressure causing code air to rush off the land into the water. Any island or land on the other side will get heavy rains as well. 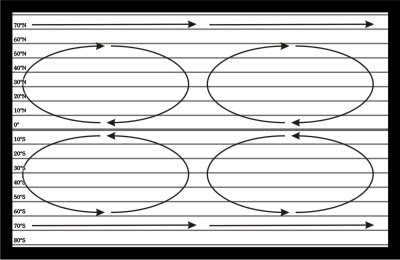 The basic rule is this.

For a Northern Continent.

The east coast will have a warm current running north along it's coast that will go out into the ocean. If another continent is close enough to the east. Then that continent northwest shore will be warmer than normal.

The western coast will have a cool current coming from the north moderating the climate.

These effects work from the equator to 60 degrees latitude.

The southern continent would be the reverse with everything in a counter clockwise direction.


So I decided to draw a continent for this exercise. So I started with this.

I draw just the coast and mountain ranges. 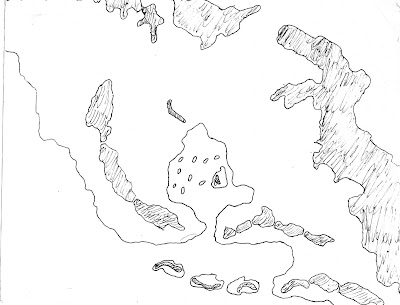 Then I decide on a scale and play around with the latitudes until I wind up with this.
I want a desert on the west side of the big peninsula. But I want the interior to be normal climate. 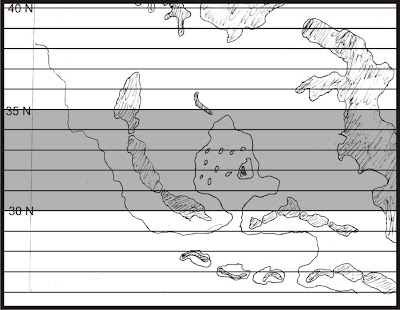 The west side being desert is easy if it is in the doldrums. But the interior is going to need a monsoon effect for rain. The big mountain range to the north and east makes this plausible. The mountains will heat up in the summer drawing moisture from the southern ocean and the middle sea. Then in autumn the effect will reverse. The small mountains running along the south shore will be old worn down mountains so they won't have much of a rain shadow effect. The southern islands will be some of the wettest places in this region.

With that in mind I pencil in the rivers and forest. 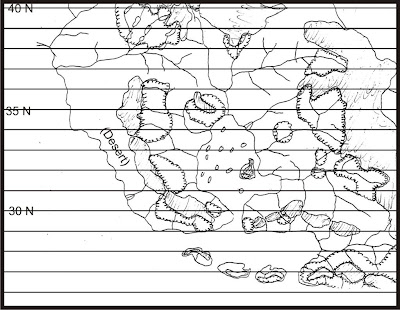 That it for Part I. In Part II tomorrow we will write a short background and label some regions.
Posted by Robert Conley at 6:00 AM

Wow nice! I tried to attempt the 34 steps on my blog but got stuck at step 1. So I made a step 0 and then completely went on a tangent from there.

Very cool post, looking forward to the rest of the series!

This should be a lot of fun!

By the way, Rob, you do have a place in my sandbox--Yelnoc Forest. :)

I was looking for Yelnoc or Trebor. But didn't find it. But then again in my house my wife has to help for me to "find" anything.

In NERO LARP I play a paladin type named Endless Star. But that not his real name which is Yelnoc Trebor. Dwayne,and Tim played the LARP once and when we were preparing we were coming up with names. We started fiddling around with writing our names backwards and Dwayne wrote Yelnoc Trebor. Everybody said that was kinda of cool. Better than Tim's beer sounding Mit Strohs. Or Dwayne's Mahgnillig Enyawd

Awesome, Rob. I'll be eagerly following along. I eat this stuff up. :)

Rob, have you penned anything for the Wilderlands in regards to wind and currents?

Funny I just did a setup of wind and current for my Majestic Wilderlands. However it at the 12.5 mile per hex scale. I can easily redo that for the normal Wilderlands of High Fantasy. Look for it next week. In between one of the "In Detail post"

I find the hypothetical climates and Köppen climate model quite useful when laying out climate for fantasy maps.

The missing ends of those URLs are:

As long ago promised, I'm editing together a PDF of this series. I noticed here that at 30 degrees are the Horse Latitudes, not the Doldrums (I learned this while trying to find a name for the 60 degree band). I'll correct that in the edited version.

Cool looking forward to seeing it.