Tim, Dwayne and myself share a lot of the same names for lands, cities, gods, and other stuff. While are individual takes are often very different we a lot benefit from our combined efforts. A lot of my contributions to this shared body of stuff revolved around adapting the Majestic Wilderlands to a generic format.

The Majestic Wilderlands based on the Wilderlands of High Fantasy by Judges Guild. Although mutated enough over 30 years that about 2/3 of is my own unique creation now. Sometime I want use bits of this in other projects so I came up alternatives to the Judges Guild specific stuff. For example Mitra was renamed Delaquain, and Set renamed Sarrath. Both of which should be familar from my Points of Light. Both of these names came from Tim.

If Dwayne the rules guy one of Tim's roles is coming up with good names. He has firm opinions about having good names for stuff and often ridicules Dwayne or myself when we come up with a groaner.

When I first set out to write RPG products I did a weekly writing jam with Tim focusing on fantasy stories. In these stories I wrote about the City-State of Eastgate which is analogous for the City-State of the Invincible of Overlord.

As you can see from this, my CSIO is a somewhat different place than the Judges Guild version.

I further altered this into Eastgate. The name again coming from Tim. During the course of writing my short stories I made a basic map to keep my landmarks consistent. You may find it of some use in your own campaigns. 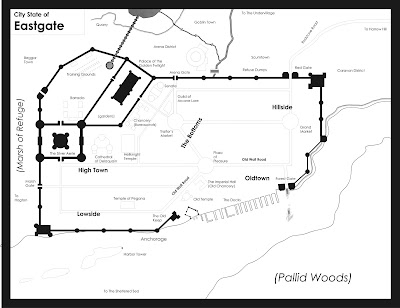 Oldtown
Oldtown is the original settlement and now dominated by the wharf districts. The eastern half is pretty seedy with warehouse, brothels, and tavern gathering to dockhands and sailors. The western half has older administrative buildings and is now getting rather rundown although still used.

Silver Aerie
The Silver Aerie was next to be built after Old town and was the headquarters for the Order of St Caelam the Dragonrider. The order had an alliance with a group of Silver Dragons. The dragons used the Aerie as their quaters. The Order of St Caelam has long since disappeared, swept away in the centuries of history that surrounds Eastgate

High Town
High town was built on the slopes surrounding the hill the Silver Aerie was perched on. There is near constant breeze from the Sheltered Sea sweeping the district clean of sewer and human odors. The wealth elite of Eastgate live here.

Hillside
The Grand Market is the center of this district where many of Eastgate's merchants and craftsmen live. The ground gradually slopes upwards from Oldtown.

Lowside
This is the poorest district of Eastgate and home to the notorious Tangles a warren of alleyways that is the haunt of the Brotherhood of the Lion Eastgate's thieves guild. Much of this district is built from reclaimed land from the estuary and is damp and muddy year round. During heavy rains there are persistent flooding problems.

The Bottoms
As Eastgate grew the population expanded to the southeast from Hightown surrounding the Silver Aerie and to the northwest from Oldtown. Between the two older district was a creek. As the city grew the creek was channeled and eventually bricked over forming the main sewer conduit for the city. The area around the creek became known as The Bottoms. It is a mix of middle and low class houses and tenements only a touch better than Lowside.

That pretty much where my notes end.

As for the stories I submitted the finished ones to upcoming Wierd Enclaves and Black Pits magazine being put together by the Fight On! crew. I don't know what style I would call them. Gritty Fantasy is the closest label probably. Like Thieves World but more about other type of city folk. One is about a priestess of Dannu a goddess of healing and another from the viewpoint of a city guard captain.
Posted by Robert Conley at 6:00 AM

That's a cool map. City campaigns are always a lot of fun to play. The politics, scheming and colorful NPCs make for memorable adventures.