This is the seventh in a series detailing the 34 steps I recommended for making a Fantasy Sandbox Campaign. Today's post will cover the following step. 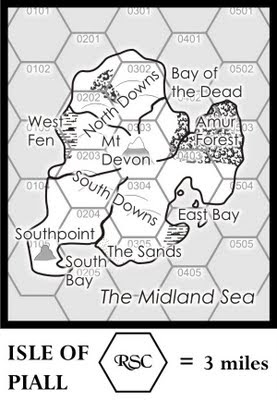 Amur Forest
This forest has some of the richest game on the island but it has never been touched by the Gevons or the other island inhabitants. A pack of wereboars curshed by Tavaras still resides in the forest attacking any who dare venture inside its bounds.

Bay of the Dead
Several attacks were made against the lich lord the century before crusaders from the Eainian Empire arrived. Launched by petty kings and barons the fleets were sent to a watery grave in the bay, destroyed by the might of the lich lord. There dead sailors and warriors were reawaken as undead guardians of Sable Port. After the crusaders destroyed Tavaras the bay was swept of their foul presence. In the centuries since the bay has retained its ill reputation and local fisherman avoid the area as well as the surrounding underwater denizens.

East Bay
This bay is the main landing for the island. Every day at dawn the bay becomes a riot of festive colors as fishermen hoist their sails to leave on their daily fishing runs. The fishermen return about an hour before sunset and evening twilight broken by the light of dozens of fires as the drying of the day’s catch begins. Watching this are four sahuagin stationed in the swamp that makes up the southern arm of the bay. They have cunningly dug out a watchpost amid the tangles of the mangroves. After the fishing boat leave they send out a fast swimmer to tell their brothers of any likely prey.

Mount Devon
Once a non descript rock outcrop the Cataclysm has exposed this limestone mass as the central peak of the island. It is riddled with caves carved out by the once higher water table. The lich lord Tavaras explored much of the caverns and made it into his strong hold. It is rumored that it connects to the Underearth and is why Tavaras as able to retain power for as long as he did.

The slopes of the mountain are bare offering little cover. The peak is likewise bare but high enough to have ice form when a storm passes through. The ice will melt when sky clears. Conditions are especially dangerous during the monsoons.

North Downs
These hills are gentle slopes on their north face and very steep (sometimes cliffs) on their south face. The ravines and valleys formed by the south faces were mostly filled in by soil during the Cataclysm forming some of the richest farmland on the island. During Tavaras rule dozens of Latifundas were established, worked by the enslaved population of the island. But overfarming depleted much of the region soil and the latifundias were abandoned when the crusaders liberated the island.

The North downs are split in the middle by a broad valley filled with the tangles of the Briar Patch. Legend has it that a sorcerer under Tavaras and his army were destroyed here by the power of a hierophant accompanying the crusaders.

South Bay
This bay is more exposed than East Bay to storms and not as popular of an anchorage for ships coming to Isle of Piall. Weekly barges depart Hawth and Sandpoint to Mikva. The bay is also a popular spot among the fishermen to hunt for clam and lobsters. Both the regular and the giant sized variety are abundant in the area.

South Downs
These hills are similar to the north downs. Their south facing slopes are gentle and the north facing slopes are steep almost a cliff. The eastern end of the range is used for grazing sheep and has several scattered sheepfolds. The area also several nature caves that are rumored to connect to the caverns under Mount Devon.


Southpoint
This low mountain was created when a rocky mass was hurled upwards during the Cataclysm and landed in this spot. It is rich in iron, zinc, copper along with several veins of silver. Several hundred years ago Baron William Gevon invited the Darkiron Clan to mine the riches in exchange for a share for the island’s use. Since then the mine has proven profitable making the Darkirons one of the wealthiest of the dwarven clans.

The slopes of Southpoint are bare of soil and have little cover. A steep stairway winds up and around the mountain to the peak where a lighthouse/watchtower is maintained jointly by the King of the Isles and the dwarves. Currently it is the home of Valard the Yellow mage (MU 9). Once the court mage of the king’s father he retired here 8 years ago. Nominally in charge of the tower he leaves the daily operation in the hands of his capable assistant Reynard (FTR 4).

The Midland Sea
Greatly expanded during the Cataclysm the Midland Sea now hums with the commerce of the surrounding realms. The Po Empire and the Kingdom of the Isles have been traditional rivals for mastery of the inland sea. In the last century Po has been ascendant as the wealth of their mainland territories have finally given them a lasting advantage against the Isles.

Under the waves the Midland Sea has been continually source of turmoil. Suddenly hundreds of square miles of new sea laid open for claims by the underwater realms. When the turmoil of the Cataclysm subsided the sea grab started in earnest. Initally with the support of the Dark Lord the Sahuagin gained the initial advantage. But later the Eainian Empire and the successor realms (Po, Isles) aided the merfolk, and Locathah were able to push back the Sahuagin and establish their own holdings. Despite the aid of the surface realms the balance of power still remains precarious in the underwater world.

The Dwarves recently suffered a rash of disappearance after a new vein was opened. They have closed the section and now are preparing an expedition to investigate what happened.

The Sands
The southern end of the Isle of Piall has an extensive stretch of sandy beaches stretching for nearly four miles along the shore and reaching nearly a mile inland. The area is known for their shifting shoreline which is carved anew every year during the monsoon storms. The area is noted for Giant Scorpions which also inhabits the local shallows. It rumored that Sahuagin raiding parties are seen here capturing the Giant Scorpions for their own nefarious reasons.

West Fen
This salt marsh runs for almost two miles along the Isle of Piall’s western shoreline. Much of it is soft ground overlaid by six foot strands of tallgrass. These strands are home to murderous packs of Daggerbeaks who hunt the local fauna and any unwary adventurers.


Having done nearly a dozen of these things so far one thing I have to say is get a good set of random tables together. Even right now I can use more tables. The main use is for an idea generator. You will have a half dozen good ideas and still will need to come up with dozens more. The tables help as an idea generator. Just keep rolling until something clicks and makes you go ah-ha!

Amur Forest I struggled with for a bit until I decided to use a variant of the cursed forest.

East bay pretty much an extrapolation from all the villages I placed around it. The sails are a color bit to set the scene for the players. The sahuagin were thrown in to tie it with once of the plot elements I will developing.

Mount Devon is from the desire to have a mega dungeon for the island. The dropping of the water table makes for a ready excuse to have lots of caves. Not like we need one but hey at least mine got some plausibility behind it.

North Downs and South Downs geography comes from something I read recently about the geology of SE England. Basically formed by the different layers exposed after the top regions get whacked off. In England's case it was the Ice Age in mine the Cataclysm. The latifundas come from Spartacus and reading roman history. Nasty places for the slave inhabitants. Now have some nice ruins for small adventures.

South Bay I didn't much of feel for so I just extrapolated something from the surrounding settlements and threw in some giant sized animals to liven things up.

For the South downs I came up with the idea of caves connecting with the larger network underneath Mount Devon. You can have some low level adventure here in these cave and in the very back have that one lone passage that connects to the vast "Underearth" beneath the Island.

Southpoint. I though it would be cool to have what is essentially a giant meteorite plopped down here and is now being mined by Dwarves. Mind Flayers or other things that man was not meant to be know in here?

The Midland Sea comes from the fact if you got an island pretty much you got underwater civilizations. Since this whole area was just recently created in terms of history means thing are probably even more chaotic than usual.

The Sands come from a show called the most Dangerous Seas in history with Niall Marvin. It one of those show that are like Walking with Dinosaurs where the creatures are seamlessly integrated with the actors. One segment has going back to the Cambrian period where Giant Scorpions inhabited the land. In fact were the only animals on land. The beach covered in scorpions stuck in my head when creating this.

The West Fens comes from the scene in 10,000 B.C where the hunters got hunted by Terror Birds.

That it for Part VII, next is Part VIII.
Posted by Robert Conley at 6:00 AM