In the last post in this series I talked about Battlemats. The problem with Battlemats is that they are either totally blank in which case you need to spend time drawing what you want. Or they are specific to one encounter or one type of encounter. Is there a middle ground? 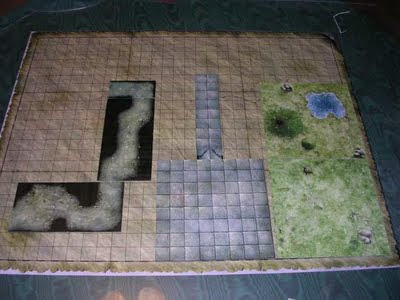 The above picture probably is recognizable by the majority of gamers as belonging to one of Wizards of the Coast Dungeon Tile sets. They have good art, durable, and somewhat inexpensive. In addition to Wizards of the Coast, there are many third party outfits producing dungeon tiles and their 3D variants. It is a staple product for many PDF publishers as you can see when you browse RPGNow's top 100 list.

Dungeon Tiles have been with the hobby since the early 80s. Probably their original inspiration was the Geomorph series from TSR. Once the geomorphs were out there it was natural to expand them to full scale for 25mm minatures. (1" = 5').

Some of the early set were quite gorgeous for the day. Chaosium produced Fantasy Paths, Village Paths, and Castle Paths. 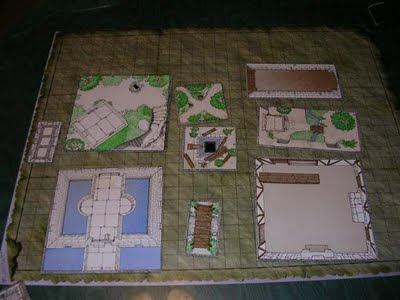 I found them difficult to use because they don't really fit together well. But they had some great individual tiles that I used over and over again. The tavern on the lower right is probably got the most use. 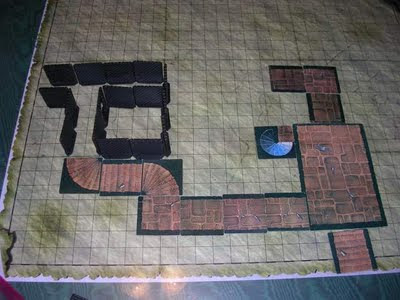 I don't know who the two. The one in the upper left was designed with a magnetic base and designed to fight on to a metal board. Unfortunally a decade the glue holding the base deteriorated and half them are missing the base (along with the board). The one on the right is the one I used the most. It was a bit of pain because the small 10' by 10' tiles had borders you wree supposed to use in laying out the dungeon. Never had enough corners to do what I want. Plus it slowed down deployment unless I had everything sorted just so.

Of the early tiles only the doors I continue to use 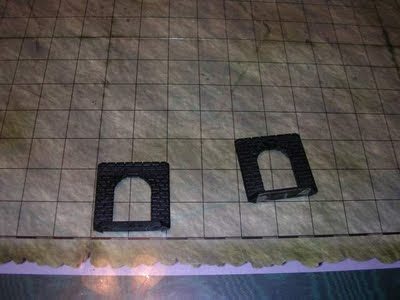 In general I find Dungeon Tiles, regardless of sets, useful in limited circumstance. The main problem is keeping them properly sorted for deployment. The current generation is way better than what I started out with back in the day. What I like about today's dungeon tiles are the "bits" As shown below. 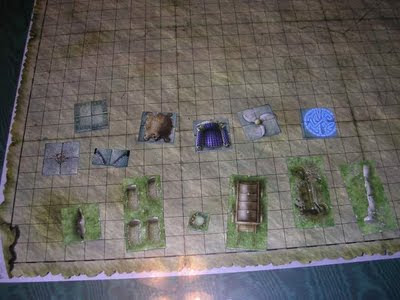 They are little pieces of scenery that I toss out to dress up something I drew on the plexiglass. They are easier to keep sorted because their small size. I find myself using the real large pieces as well. It is easy enough to keep them on a nearby bookshelf to pull and assemble into a battleboard.

I think the best use of tiles is still the traditional dungeon drawn on the grid. The pieces are similar enough that sorting is rarely an issue and I find tossing out tiles can be faster than drawing.
Posted by Robert Conley at 6:00 AM

Hm. I came to a different conclusion. It took me forever to find the "bits" you like so much. I also had trouble finding the right tiles. What I have right now is a selection of the 20 (?) simplest tiles. I wrote about it recently and had a picture that went along with it. An important aspect is my unwillingness to prepare encounter tiles ahead of my sessions. It would be even more prep time that I'd rather not spend.

Maybe you can do a follow-up to this post, showing that bookshelf of yours, that allows you to pick the right tiles so quickly? Maybe a picture of the tile pile so that we can get an idea of how much sorting you need to do?

Yup I plan to show how I put it all together for myself.

I use them on a regular basis. We have a battlemat on the table, but usually I try to use the tiles.

I threw a delve up here http://lasloslessons.blogspot.com/2009/08/simple-dungeon.html on my blog. I had run my players through the "Keep on the Shadowfell" so just kept my collection of tiles ready. After that I have been putting together my own maps. If I have put together my own map, I'll try and use the tiles that I have and store a particular room together in one zip-lock bag.

Yeah, the storing and quick hit use of them is a pain but they is nice when they on de table.

First, laminate them. This allows you to draw on them with your battle-mat pens and not worry about spills.

Third, your tiles should represent things you draw most often. A tavern is an excellent one, an inn tile that could be the upper floor or an adjacent building would be good too. A couple different general shops, a smithy, a couple different houses, and a library.

Any dungeon tiles should be modular enough to use in many applications yet large enough to sit nicely on the table. The 2" x 2" tiles fail the latter, while the temple thing surrounded by water fails the former. I'd suggest 2" x 4" sections of hallway, and overlap things if you need to. Bits of putty stuck to the corners of both sides can help adhere them temporarily to the battlemat. Dried rubber cement may be tacky enough too.

Sixth, suggestion. The boxed set Night Below contained top-down view creature tiles. This was nice because nobody has (Spoiler ahead) a figurine of an Aboleth and not everyone has bunches of zombies. Number them on the corners for identification during battle, print them out, laminate, and suddenly you have mook markers on the cheap.

And on the backside, a corpse image so you can flip them over when they die.

I forgot about Night Below and the tiles. That a good point.