This is the third in a series detailing the 34 steps I recommended for making a Fantasy Sandbox Campaign. Today's post will cover the following steps.

Because of time constraints I am going to detail just a large island in the Kingdom of the Isles. It will be called the Isle of Piall.

First I setup my hex grid and scale. Instead of 5 miles per hex I am going with 3 mile to hex to give a little more detail.

If you want to methodically map your setting then I suggest you read this post on mapping with hexes. 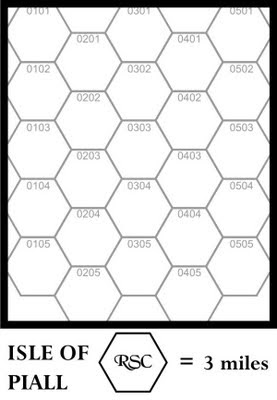 Then I draw the coast line. Don't forget things like lakes and smaller islands. Note here I added some small island in the eastern bay. 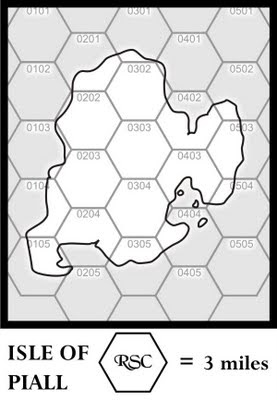 Then I add the mountains. Because I am working an island I am going ahead and add hills. Note that I am going to use a symbol map as it is probably the easiest for a novice to get going with. Feel free to use whatever style of mapping you prefer.

An island will have a central mass and possibly several adjacent masses forming peninsulas. These become the mountains, foothills, and hills of the island. In between are the island's lowlands. 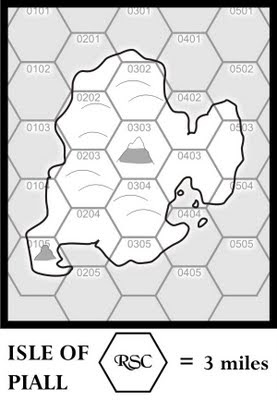 Then I draw rivers making sure they go downhill. 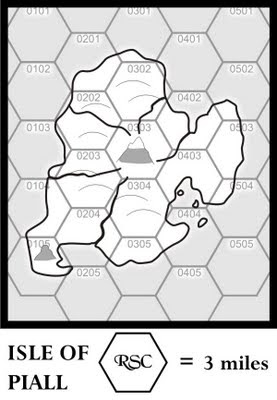 Since the map is small and just an island I am not going to worry about the hill and drainage of step 9. I will have some advice for this step at the end of the post.

Next we draw in the vegetation which include forest, swamp , and sand. While a desert would be out of place an area of extensive beaches perfectly plausible. So I pencil one in along the coast in hex 0305.

Swamps often form along coastal regions so I place two of them. The island isn't big enough to form much of a rainshadow anywhere. I already determined that the monsoon rains needed for agriculture comes from the south. I think it logical that I reserve that area for settlements. So I put a pair of forest in the northern areas of the island thinking that the locals haven't had enough time to clear them. 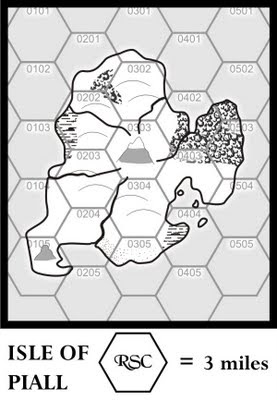 Next is Step 11 putting in settlements.

The reason you want to learn a little about drainage is that it helps to place the hills. Especially on large scale maps. A typical drainage 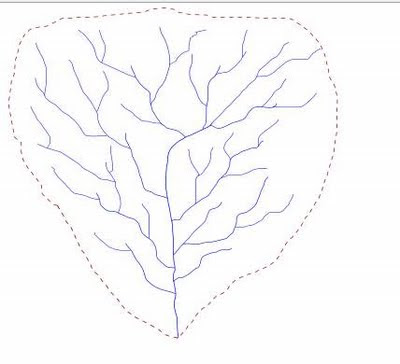 Much like a tree with the mouth of the river at it's base. The edge of the drainage basis will be the local high ground and often be considered hill terrain.

My home area has a straight forward example of what a network of drainage basins look like. 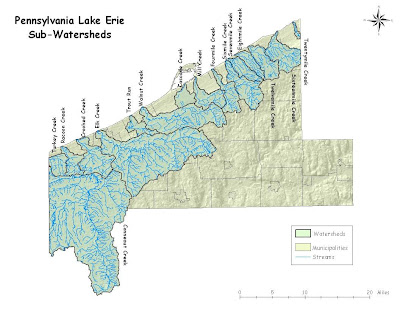 At the boundary of the drainage areas are high ground and around here and is somewhat hilly when you a mile or so inland. If I was mapping this as a setting I would place a line of hills that parallels the shore about 5 to 10 miles in. Then in between the Conneaut Creek basin and coast I would put some hills. And then add some hills along the southern edge of the basin.

Also the peninsula in the center of the map is a huge sandbar known as Presque Isle. It several miles long and has several excellent beaches. After writing this is when I decided to add the large sandy area to the map.

That it for Part III, tomorrow is Part IV.

Great series of posts! I'm following your advice on sandbox gaming for a while now. Its something I'm willing to give it a try. Keep it up!

I like the hex maps used in this example, particularly the fills for forest, swamp, etc.

Can you tell us where we might obtain these fills for our own maps?

PS - Looking forward to the remaining posts. I did quick-and-dirty version of campaign dev on my site, but this is great detail.

down about halfway under terrain tiles. Also you may need to use Internet explorer to view this.

@Rob: Thanks for the link - great resource!