From the Attic: The Village of Kensla 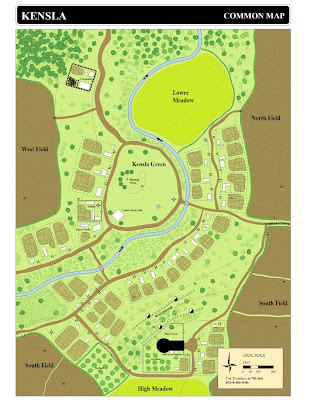 The village is in the middle of about 2,500 acres of cropland divided into three fields using the three field system.

Daysha is a agricultural goddess of home, hearth, and healing. Her shrine is on a hill and underneath is a series of catacombs where the villagers bury their death. The wealthiest families are permitted to be buried in the Burial Yard. The four cottages to the east are tenants of the shrine.

The meadows are used for grazing livestock. The Low Meadow will flood in the spring. The six cottages along the stream are occupied by cottars the lowest social class of peasants. They have problems with flooding. The ones by the West field are occupied by the wealthiest peasants the four villeins and three free yeomans. One of the yeoman acts as the village beadle breaking up fights, chasing down stray livestock, and making sure that any fines are collected. The smithy and and carpenters are freemen as well. Ansol Cardin is the reeve and administers the day to day affairs of the village.

Every three months the Kensla's noble lord will send his baliff to adminster a hallmoot where any disputes are heard, fees collected, and fines levied. For acts of violence not involving murder the miscreant will be put into the village stocks for several days permitted only water. The hallmoot is held at the meeting stone with the villagers congregated on the hillock to the east.

The fields and orchards are surrounded by hedges to keep the livestock and larger animals out.
Posted by Robert Conley at 6:00 AM

What I'm curious to know: How is a map such as this used at the table? Do players point at one building and say, let's go see the carpenter? Or does it involve a battle on the streets with players looking for choke points? Or do you just hand out the map when the players enter the village as a prop that gets no use after the first 15 minutes? I'm assuming it's taking you quite a while to create the map, and I really love some ideas like the lower meadow, the open air tavern and the meeting stone -- classic background for scenes! -- but I wonder whether creating such maps myself would be time well spent. Maybe it's worth the effort if you get to share the end result and other people get to use the maps as well…

I could see it being a GM's map, which helps the Referee describe the spatial relations and locations relative to each other.

I think the most detailed maps ought to be the domain of the Referee. It is their duty to describe the world, and theirs is the 'top-down' view in all meanings of the words.

I created this version to place in front of the player. The labels are for obvious things. (although labeling the Reeve's house can be argued)

The map in my post to be placed in front of the players again the labels describe obvious things.

a keyed version that is only for the GM.

For combat encounters I will use my whiteboard and draw the specific location based off of the map. I had a quite a bit of practice so it takes me two minutes to set an area. I also have lots of props like building that I can just throw down.

My style is highly visual not so much verbal descriptive. Other GM may have different styles that work just as well.

I will say that even if you style is primarily verbal you can save a lot of time by having a map of an area to throw down. Obviously it doesn't have to be as detailed as your keyed map.

As for throwaway locale like the next village along a road. I will sketch it on my whiteboard in a minimalist fashion. Kensla was a central site for a number of sessions so I put some work into it.

As a long time player at Rob's table the one thing you can expect and that's great looking maps and lots of handouts. The maps add to the playing experience by allowing us to get the spacial relations coreect, but seeing the personality of the city itself and once you get to know the city or village its fun when you look at the map and say, "I go the sourcer's supply house, but up caravan road, not gorge alley. Uber Mean Man is there and I still owe him 13gp."