From the Attic: The Quest for the Oldest Character

This is a bit of a crazy thought. But I think it would be neat if we could find the oldest character sheets around, have it scanned in for folks to see and read.

I posted this thought on the various old school forums and to get the ball here is a scan of my oldest character. While it doesn't have a date I do have a sheet dated Nov 1979 and this was to me was obviously it predecessor being some several thousand XP less.

As for the familiar name I really liked the names Roghan and Zelligar from B1. Also this was rolled up with the most generous of the character rolling methods hence the bloated stats. What can I say I was 14 then. This character (and Zelligar) were my first serious AD&D characters. I started playing in the fall of 78 and rolled these guys up shortly after. They never progressed beyond 6th level as I became one of those folks who DMed nearly all the time. 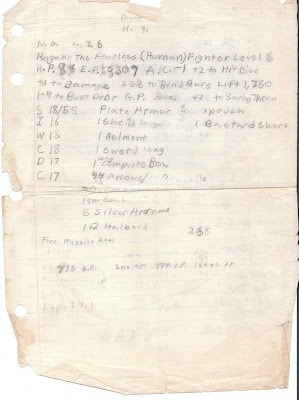 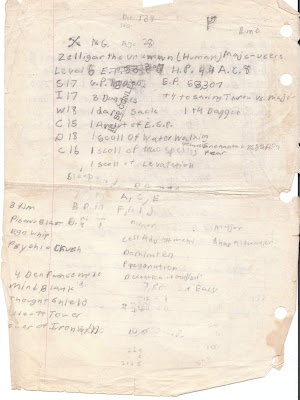 Excellent idea. I have my original "Dead Folder" somewhere in the basement and I'll see if I can find the original party from 1977. The very first encounter in our very first session resulted in a TPK. They never laughed at 4 kobolds again.

Sadly, I have long since shredded all my old gaming notes, other than 2 binders (one Traveller, the other D&D) that somehow got placed on a seldom used shelf.

I do have my first Traveller character, Rory Akimasi, in the Traveller file.

No idea where I got that name from.

The absolute oldest versions of any of my regular PCs no longer exist, lost in the hoary backward abysm of time. All I've got are the mid-to-late period yellow-orange sheets, and although some of the PCs I rolled up on those are originals, few of them were played as such.

I have the rune on your character sheet above tattooed on my hand. Generous stat roll methods at 14? Could have doing dummer things than that! ;)
I wish I'd retained a 10th of my old game papers and drawings and maps and such - alas no.