In the last Swords & Wizardry session at the Gold Star Anime I decided to try representing the maze in the dungeon a little differently. My goal was to represent it's confusing nature better. To this end I decided to use the Dwarven Forge set that I own. I would only show a single section. Adding to it as the party advance along tearing down the rear.

This is a picture of what it looks like in action. 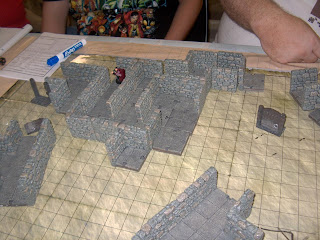 Another shot a little further out. 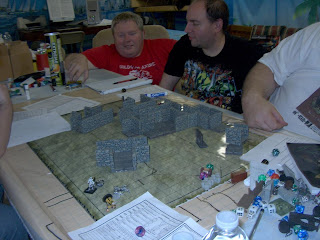 The gentleman in the red shirt is Jerry Humes. He and his wife run the Gold Star Anime and make it a friendly place. I encourage everybody in the Edinboro area to give as much business as they reasonably can. They provided the game space and the above photos. It been a lot of fun running Swords & Wizardry for everybody up there.

Also I will be up there Saturday Afternoon running a D&D 4e Essential if anybody interested in coming.

No I am not turning to the dark side. So put down those light sabers and blast pistols.

I should be running another S&W game in a week or two. Jerry and I will work out the schedule and let everybody know.
Posted by Robert Conley at 6:00 AM

If anybody thought you of all people were turning to the dark side, they clearly haven't read your blog. ;)

Good luck with the upcoming game!