From the Attic: Lisal

A lot of people like the hexmap style of the Known world of Mystara. Hexographer is one of the best program to get to map in this style. Here is bunch of volunteers have put together a comprehensive collection of Mystara maps.

I too dabbled in the style. For a while in the late 80s I did some work on a campaign world that was completely my own work. I figured if I ever got a chance I would use this for publishing stuff as the base of the Majestic Wilderlands belonged to Judges Guild. It never worked out so it still sits in a folder. Many of you will recognize this as basic backdrop of the How to build a Fantasy Sandbox series.

Here is the entire map of Lisal as it was originally done. 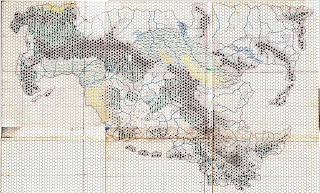 The reason you don't see settlements or borders is because I had a separate folder full of historical maps. Some of which you can see here.
Posted by Robert Conley at 6:00 AM

What is the scale on this monster? Speaking of 'How to Build a Sandbox'...