Thanks to Zachary of RPG Blog 2 for helping with yesterday's prank.Part XVI

This is the seventeenth in a series detailing the 34 steps I recommended for making a Fantasy Sandbox Campaign. Today's post will cover part of the following step.

Pick the starting population locale and draw a full page map of the settlement. This is the "Home Base"

0403 Mikva (castle, town) Human
This is a small castle town of 800 humans with several dozen Dwarves and Halflings. The castle itself sits on a bluff overlooking the bay. It is the seat of the current Baron of Piall, Argus Gervon. A several trading vessels stop here every week to pick up ingots from Southpoint. Before the fall monsoon season dozens of traders put in at Mikva to attend the Piall Fair. Here the island’s grain, and more importantly wool is traded for goods and supplies needed for the next year.

Currently the King’s Sheriff Tomar Revan is staying at the one of the wealthiest merchants in Mikva; the Honorable Orlon Beras. The Sheriff is currently using offices at the Mikva Trading Hall to conduct his investigation and any other Royal business. There is considerable tension between Baron Argus and the Sheriff.

For this post I will go step by step about how I create a town map. Roughly these are the steps I do for hand maps as well.

First I start with a blank hex map. I use .28 inch hexes at 40 feet per hex. This gives enough coverage to draw towns and villages. For cities I go a larger page size. 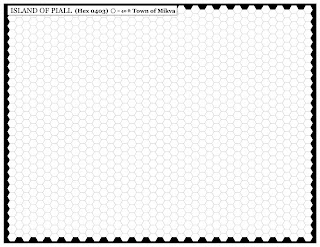 I start by turning the Coast layer and drawing in the coast line. At this level rivers are considered coasts as well. Streams, if any are drawn as lines on a separate layer. I try to make the coast line a complete shape that can be filled with white. The coast layer is above the hex layer.

Next I toggle on the water layer and put down a page size rectangle of 20% gray. I copy the coast I drew and copy it to a ground layer beneath the Hex layer. I fill it with white. You may want to look at River Secrets and adding a glow effect for shallow water. 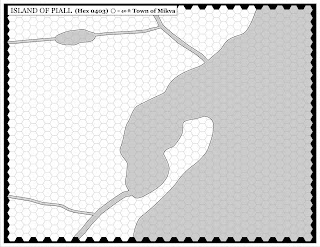 Next I add in vegetations by drawing areas and filling them in with various terrain fills. I also added some cliff and steep contours. Finally put in cropland. By now you should be getting a sense of how the physical layout will turn out. All this on the vegetation layer and below the hex layer. 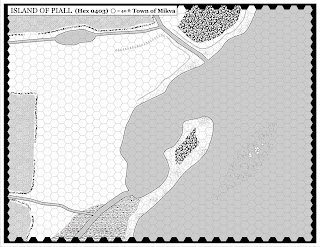 Next I add walls which are a major constraints on how a town is developed. For Mikva I choose to go with an early version of Chepstow Castle. I added wooden palisades. The reasoning is that Mikva isn't wealthy enough to build town walls but does wish to control access to the market. Hence a wooden palisade. All this goes on the Wall layer which is above the Hex layer. 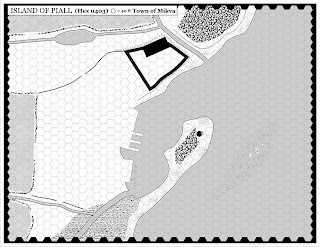 Now all this is beginning to enough to suggest a network of road. I do this in two stage. First I just focus on the major roads. Later after I place the buildings I will work on minor roads. All of these are lines and filled shapes at 40% gray. The road layer lies above the hex layer. 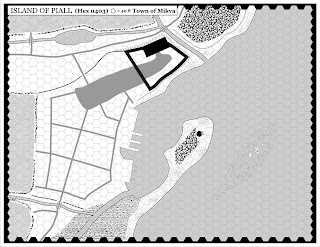 I then take the population and divide it by 5 to a rough idea of how many building I will need. This comes from assuming there is an average of 5 people per household. This works out to 160 or so. Because Mikva is still developing as a town I decided that is about half are individual buildings. Most mud and whattle huts. I don't keep an exact count as long as I get close. What I care about is that it looks dense and big enough for the population. 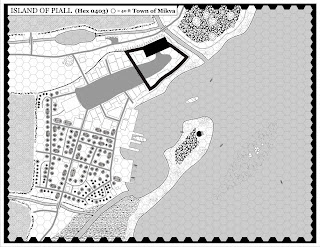 All this goes on the building layer above the hex layer. Next I finished up the paths by looking at the placement of the buildings. I leave the keying of the map for later after I complete the next several steps of detailing the town.

By computer or by hand you will have a map showing the home base of the players.

Of course many of you are wondering what the heck is going and why this post is here. Well I was wandering around and since some folks have been having trouble distinguishing Bat in the Attic from The RPG Blog 2 I thought it would be just as well that I drop it off here.

Thanks to Zach for agreeing to this. He and I don't collaborate often but it is always fun when we do. (Thanks again for having me on the podcast). So I hope you, everybody else, and especially Jim enjoy our little prank.

That it for part XVII next is Part XVIII where we go into further detail about the town of Mikva and return back to the Attic.
Posted by Robert Conley at 6:00 AM