From the Attic: Star Wars, Star Trek, Galactica and oh what the hell add Battle of the Planets

James over at Grognardia has a good series of posts on his memories of pre-Empire Star Wars.

Likewise for me in the summer of 1977 Star Wars had a huge impact on me. Then in rapid succession we had Star Trek the Motion Picture, and Battlestar Galactica. The first anime cartoons were also being adapted for US televisions. While I loved the early 70s stuff like the Six Million Dollar Man, Planet of the Apes (move and tv series) These three movies were head and shoulders above what came before.

Coupled with reading Niven, Heinlein, Asimov, Pournelle, Piper, for the first time. The late 70s fired up my imagination just before I found a little game called Dungeons & Dragons.

I collected a good collection of 6 inch Star Wars figure. I had some sets but I also had a mix of other 6 inches stuff like a few micronauts, the Space 1999 Eagle (boy that was huge) and other.

I had to put together in some grand story like the sci-fi novels I was reading at the time. I threw some Star Wars, Star Trek, Battlestar Galactica, and even some Battle of the Planets. Even had a map which I used to set adventures I created for my characters. I used a compassed and I had a set of rules which I still remember after 30 years that I use to create it quickly on a piece of paper. 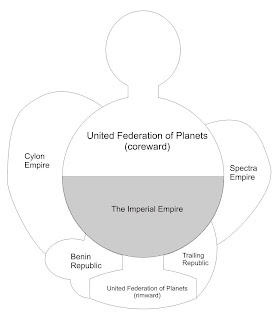 It started out as the United Federation of Planets as human dominated space faring civilization. The backbone of the fleet was the mighty battlestars which was represented by an upside down ship hull. There was a series of model kits you could buy to build a sailing ship. The base of the kit was a solid hunk of wood about 12 inches long that was carved in the shape of a wooden sailing ship.

For some reason this particular model never got built. So I inverted it, carved some weapons bays, a niche for the bridge, and there was line of holes intended for attaching hook for the rigging that became launch tubes for the vipers and x-wings based on the battlestar.

The Enemies of the UFP were the robotic Cylons, The Spectra Empire was ruled by the bad guy from battle of the planets. And the remains of the Benin Republic once the rival of the UFP. There was a bunch of small states scattered along the frontiers.

However not all was idyllic in the Federation and a coup occurred transforming it into the Imperial Empire. The Battlestar Galactica was trapped behind enemy lines and had to make an epic journey with all kinds of adventures to make it back to the last free remnants of the old Federation.

Before I turned to D&D and RPGs full time, the Federation was slowly coming back making headway against the Imperial Empire.

I had an elaborate backstory which proved excellent preparation for when I plunged into D&D and other RPGs.
Posted by Robert Conley at 6:00 AM

"I am Zoltar of planet Spectra!"

I loved that show when it was on.

I remember being amazed by "Battle for the Planets", compared to the other cartoons I'd watched the animation and fight scenes were simply mind blowing to the child me, who had never seen anything of its like.
These days I'm no anime fan, with a few exceptions most of them just bore me, but back then, discovering "Battle of the Planets" I was riveted to that show.
You know, most everyone of around my age fondly remembers the original Battle Star Galactica.
I and remember being so excited about it's release. I lived in Jersey at the time, right across the river from NYC, and there was this massive publicity boost in that reigion, full page adverts in the paper with Frazetta art no less, sky writers reminding us of the premier.
My young mind was reeling with how great the show was going to be, I had this notion of Star Wars cool backed by the bad-ass attitude of Frazetta and instead got a bunch of crappy characters running away from robots who couldn't hit the side of a barn, and battles that looked the same much of the time because were made up of recycled footage. Man was I let down.