This is the fifteenth in a series detailing the 34 steps I recommended for making a Fantasy Sandbox Campaign. Today's post will cover part of the following step.

0504 Kathi (village) Human
This is a farming village on the eastern shore of the Isle of Piall. The village has 300 humans and is held by Sir Vandas Gervon a distant cousin of Baron Argus. A third of village is devoted to fishing and the remainder works the surrounding fields. Despite Baron Argus’ disapproval Sir Vandas tries to be helpful to the Sheriff. He hopes to win the Sheriff’s recommendation so he can send his son, Andal to be a squire at the royal court in Haras. 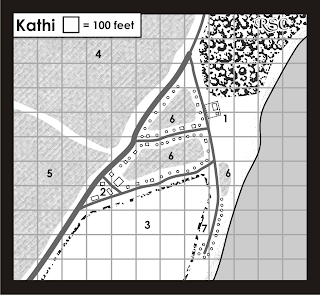 This is pretty much a typical manorial village. You have the lord who is Sir Vandas who has the power of justice over the serfs of the village. Freedmen can appeal to the king's sheriff in Mikva however as a practical matter this is only done as a matter of last resort as most try to avoid causing major trouble in the small village. The villagers have several officers the Reeve which works with Sir Vandas on day to day administration, the Beadle in charge of collecting fines and keeping the peace, the Woodward in charge of making use that the woods are properly used, and the Hayward which inspects the fields, and tools to make sure everything is done properly.

The freedmen of the village will include the innkeeper, the smith, the carpenter, several yeoman who hold land rent-free in exchange for being ready for instants military service. A handful of the villagers hold strips in their own name with the only requirement that they pay a rent for using the common plow.

I recommend Harnmanor as the most gamable treatment of Manorialism. Fief and A Magical Medieval Society are both likewise good. Ken Follet's World without End, the sequel to Pillars of the Earth has several chapters set in a medieval villages that has useful stuff for gaming. Finally on Lythia.com a well done generic manor was released.

That it for part XVI next is Part XVII where the town of Mikva is detailed.
Posted by Robert Conley at 6:00 AM

HEy Rob. Any chance of this complete series (whenever it gets finished 8) being made into a PDF? I"ve been trying to save the webpages as you go along, so that I have them to refer to, but it's not working out so well. 8)

Yes that will certainly happen

Rob, I've been printing out each part for my own easy of use and reading them that way. As a side effect of my profession (tech writer), I've been marking up the hardcopy with edits as I've been reading. Would you find it beneficial for me to send you an edited set of the text?

Please do and THanks

Will do. It may be a little over a week before I have it all ready as the next seven days are very busy for me, but I will get you what I have to date no later than October 3.

Take your time it will be a while before I am ready to start working on the published product. The pitfall of being a part-time writer.

No problem - I'm only to Part VIII right now (having only recently discovered the series). Once I catch up, I'll send you a copy for your review and approval.