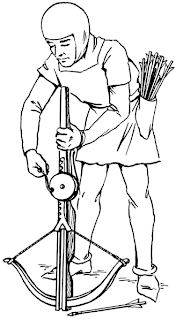 In this post Tim of Gothridge Manor talks about the official guard figure. In it he mentioned the Knight Killer Crossbow. This weapon originated out of a GURPS campaign where everybody played a member of the poor suffering town watch. Among the tactics the players developed was a super heavy that could only fire once as you needed to winch it up to recock it this took at least 6 rounds.

The SoP (standard operating procedure) was for everybody to fire their knight killer, drop it, and then ready their normal weapons. Not everbody hit but those who did tore into their opponents. Being GURPS this often meant an opposing adventurer was taken out in one shot. Those who survived were often grievously wounded.

When I wrote up the Majestic Wilderlands I included it as part of my price list. It was folded into the general boost that crossbows got. All crossbow got a bonus to hit because of superior accuracy. The Knight Killer Crossbow is patterned after the european arbalest.

I remembered that the crossbow was not a popular weapon with the great and the good of the Middle Ages, and I found this on a site about mediaevality

"The Magna Carta sought to ban foreign crossbowmen in order to defend the realm but a Pope had tried to ban this weapon even before this time. The devastating effect of the crossbow and the wounds it could inflict were reflected by these Mediaeval weapon bans. Article 51 of the Magna Carta stated the following:

" As soon as peace is restored, we will banish from the kingdom all foreign born knights, crossbow men, sergeants and mercenary soldiers who have come with horses and arms to the kingdom's hurt."

In 1139 Pope Innocent II and the Church of the Lateran Council issued a judgement against the use of the crossbow by Christians against Christians. The Mediaeval crossbow was referred to as "the deadly art, hated by God, of crossbowmen..."

The Mediaeval crossbow was viewed as an abomination but the weapon bans failed to stop the rise of crossbows, they were simply ignored, and the crossbow continued to remain a favoured weapon across both Europe and England."

In GURPS the damage of the Knight Killer was 3d6. And for the Swords & Wizardry game we are playing it's doing 5d4 damage. So it devastates what it hits.

3d6 Impaling! which mean any damage after the armor's DR was subtracted was doubled.

@Daddy Grognard - it was easy to use learn. I believe that bit of history played into calling the weapon a Knight-Killer crossbow.

While I find the Knight Killer Crossbow amusing, I do have some mechanical questions:

Am I reading the description right that they all weight 6.0 pounds? Should not the heavy/KK weight considerably more than the light and the prodd?

It also seems that the heavy/KK should cost considerably more than the light crossbow.

I've always had a few crossbows available, and the arbelest has always been part of our games.

2d6+1d8+23/d6 is our damage for the arbelest, though as you noted only good for one shot in a real combat, fire and toss.

It's supposed to do a lot of damage...