Descent into the Depths of the Gold Star Anime Part II 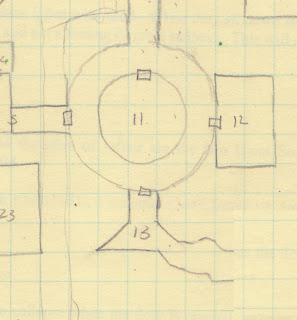 In Part I we left the party paralyzed and battered in the teleport circle room. You would think that this would be a solemn moment of reflection and rest. Nope!
Flushed with victory Hazar arranged the paralyzed party members and proceeded to explain to them exactly how they owed their lives to him and his heroic deed. Then proceeded to explore the circular corridor around the teleport room.

He found the south door and boldly opened it. Beyond it were 4 Orcs setting up a campfire in alcove with a excavated tunnel leading beyond it. Startled they stared at each over for a moment when Hazar whipped out some ration and offered it to the Orcs. With a growl they readied their weapons and charged. Once again Hazar was in a fight for his life. But his skill was up to the task and despite several grievous wounds he dispatched the orcs. Staggering back to the teleport circle room. He laid down to rest until the party revived from their paralyzation.

After the party revived everybody got healed and it was decided that they would rest here. Fortunately the next 8 hours were uneventful and the party rememorizes spells and took care of any remaining injuries. After some discussion it was decided they would try the door to the west and see what lay beyond the rear of the secret door. 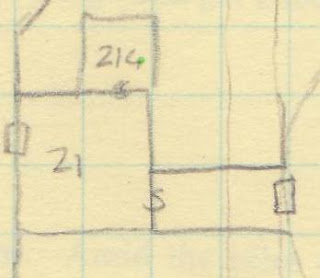 Carefully opening the secret door they found a 20' by 20' room with ruined remains of furniture. To the north was a busted secret door already opened.
After carefully searching the room the party tried to open the door to the hallway. It was stuck? After finding no locks or anything barring it from opening the party decided to use main force. After a few whacks from Dunnigan's Axe the door fell down in a crash! 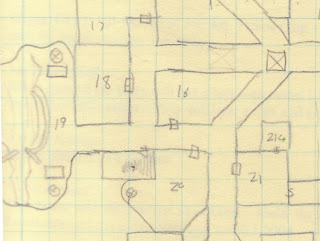 To the north they heard the hurried scramble of a good deal many people getting up and putting gear and weapons on. Reacting quickly the party rushed out into the hallway positioning themselves around the corner. All except for two party members (which I forgot to write down) decides to go back around and head to the three way intersection to the north. Running they failed to notice the 20 foot pit and promptly fell into it. Fortunately it was just a pit and they survived the fall.

Nineteen Orcs rushed out of the room filling the hallway up. Alaghazar webbed the Orcs and the party lit them aflame. A few well placed bow shots and blows brought the rest of the orcs down. Unlike the debacle of the ghoul fight the party slaughtered the orcs within two rounds.

Hearing further noise to the northeast, from room 18, the party got the two that fell out of the pit. They again setup another ambush this time using liberal amounts of sleep spells to bring down another 19 orcs. The haul from 38 orcs was their first real treasure, which included large amounts of silver pennies, a map to an Elven Stables, a Potion of Red Dragon Controls and a magical sword named silander which hates orcs. These items were found by Hazar in metal urns which had poisoned needle traps on the lids.

While most of the party was cataloguing the treasure, Alaghazar wandered away and opened the door to #16, at which moment a rack of spears fell, some of them impaling him. Fortunately quick attention by Janus the Cleric prevented his death. The room proved to be the remains of an armory which little of value.

Janus. Alaghazar and the party cautiously looked at was in the cave in Room 19. There they found a ornate bathing chamber with two statues of Silvanus' handmaiden on either side. The orc however fouled it as they used it as a latrine. Calling on Silvanus Janus and Alaghazar wades into the foul pool. Like an eraser across a chalkboard the filth was swept away and the chamber was restored. This display of the god's power caused Alaghazar to fall on his knees and swear fealty. Pleased Silvanus granted the party a bless of +1 to all rolls for 24 hours. 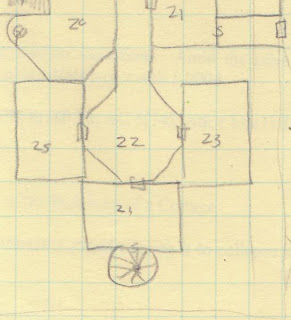 Further exploration of the area revealed a set of stair going further down into darkness. The party decided to save that for later and explore the rest of the the level.

They turned around and headed south and the corridor dead ended in a octogonal room with three doors. The room was littered with the debris of storage crates.

Checking the door to the west and east. The party found a #25 to be an old dining room, and #23 a Kitchen with one of it's stone cabinets in rubble. After searching the party found 30 days worth of Elven Waybread intact!.

In room 24 they found an old store room with little of value. But behind some crates they found a secret door that opened to a set of spiral staircase going down. After they go down a few feet they found an iron chest with a few skeletons around it. After carefully examining everything Hazar opened the chest and found it loaded with coined covered with a black substance. He picked up a few and it turned out it was a mold. Unfortunately the mold causes a deadly disease but Hazar had natural immunity (he rolled a 20 for a saving throw). He told the party to stay way as he carefully cleaned everything. After it was all counted they had nearly 8,000 in silver pennies. 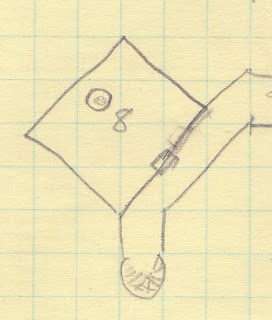 The stairway stopped at the end of a corridor going northeast. The party checked out the one door they could see and found another storeroom with ruined crates and this time lots of smashed up bottles. A careful search reailed two intact bottles of extra-healing.

When they reached the northeast end of the corridor they found themselves looking into a maze. In the distance they could see the occasional skeleton bone.

Carefully setting the party's marching they ventured in the maze. At first they tried to map but after a few twits and turns they gave up. Hazar quickly took charge and he seemed to pick his way through the maze with ease. Note I am not posting a map of the maze as the adventure is still ongoing. 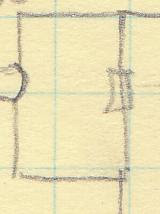 Threading the maze party they emerged in a strange room. It was empty with a few old dried splotches of blood. In the center of the west wall there was a 4 foot diameter room that was covered in grease to make it slippery. It curved upward and to the left. When all attempts at climbing it failed the party went back into the maze.

After a hundred feet in they heard a bellow and a roar and a Minotaur charged the party. Hazar shouted run! and the party fled running as fast as they could. Eventually they ran into a dead-end and were forced to face the Minotaur. There was an 10 by 10 alcove that The Wizard stepped into but that proved to be a pit trap and he fell. Fortunately he survived. Hunter the Halfling fighter met the charge but was head butted back five feet into the rest of the party.

The party rallied and with swords and spells managed to severely injure the minotaur. Bellowing with pain the Minotaur fled back into the maze leaving the party gasping for breath. And that where we brought that night session to a close.

Next post will have some concluding thoughts and comments. Despite various bouts of disorganization the party did really well and had several great roleplaying moments. We will see how it winds up next time at the Gold Star Anime.
Posted by Robert Conley at 6:00 AM