I did a few things that greatly enhanced the fun of my players.

Since my game was set during the Original Series, when I ran off the character sheet I made sure they were the correct color!

I had to try a couple different shades before I found the right red that was readable. The yellow was Goldenrod.

Most of my game was set in a Amundsen Class. It was about the size of the Reliant and used as a general purpose exploration ship. As a warship it could pack a hard hit as it was loaded with the best photon torpedoes that could fit on it's frame. A quirk of the Ship Construction System was that photons gave a lot of bad for the space. Probably a lot more than it should have been.

But the best part was that FASA's game system use quarter inch squares as it's full scale (15 mm for you grognards). This made mapping the ships very feasible. Also in these pre desktop publishing time we were lucky that FASA had the entire Enterprise laid out in the full 1/4 inch scale. So we could photocopy what we needed and make NEW deck place.

This is the deck just below the Bridge.

Half of the saucer section that shows the intregretion of pencil and paste ups we used.

These decks were a group effort with four of us working on them. The guy who did the pencils was really good and particularly proud of his work.

One thing that grated on me on GMing any sci-fi game is what I call the parrot problem. When the sensor, comm, computer, etc officer was dealing with something. I would say what they say and either they repeat what I said or just pretend I am putting words in their mouth.

Frankly it was not fun and took away from the immersion. FASA had a nifty solution to this in the form of the Tricorder/Sensors Interactive Display. 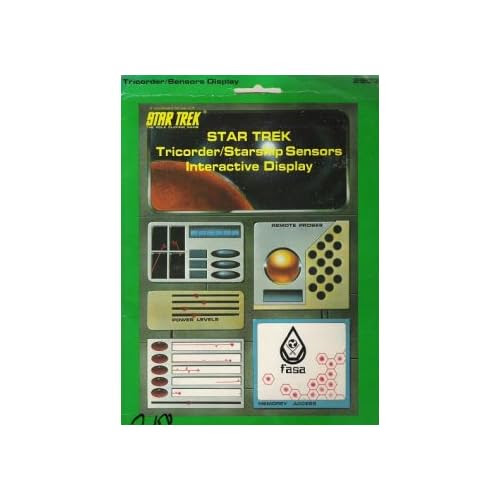 Basically they had four decoder wheels. The GM would give you the code for one or more the wheels and you would turn them to read the result. The GM had a table in front of him with the codes. You could tailor the results to give more or less information and you avoided the parrot effect. Plus it put some of the burden back on the player to use the display correct and intrepet the results.

Of course it was high geekiness.

Here some picture of it in Action. The player made a good success with his roll so I told him A21, B10 C11 D11. Read off #15 on Tricoder Strip B for further information. 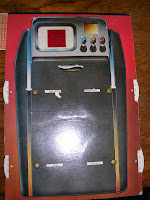 So the player saw an Approaching Energy Source Solid Lifeform and Topaline was involved. The player was up on his Star Trek lore he would know that Topaline is used in life support system and interferes with sensor readings.

This is the starship sensor side. 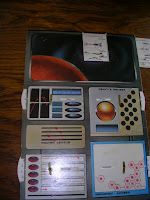 The neat thing about using this that player remember certain codes so as they get more experienced they didn't need to fiddle with the dials and just gave the result. This also added to the immersion. Today I would probably just use a chart and the player can read off of it as the dials are fiddly to use.

Imagine what the sensor/hand scanner chart would look like for Encounter Critical!, Gamma World, or Mutant Future.
Posted by Robert Conley at 6:00 AM

What a cool idea for roleplaying games where this sort of sensor stuff comes up regularly. You could use it for all sorts of sensor stuff: R45-7 = Heavy Brutes incoming from East-South-East in a game of Alien fighting marines...

"Imagine what the sensor/hand scanner chart would look like for Encounter Critical!"

Holy crap! I may have to do that!

@Alex While you want general categories, the strips were helpful for setting or genre specific items. For example the charts for the Third Imperium would include items like Beowulf class Free Trader, Empress Marava class Far Trader, and god forbid a Tigress class Dreadnought shows up on the scanner.

What a great post! Seeing those character sheets alone just makes me want to run out and get the paper!

My players were never patient enough for the Sensors/Tricorder Interactive Display. So my best memory of it was buying it at the 20th anniversary convention in Anaheim.

I liked it, though.

Good stuff. Making the ship blueprints a cooperative effort is a great idea. I can see how that would really help the players bond among themselves and with the ship. And that sensor display is a clever solution to Tawny Madison syndrome.

TOS "The Only Series", yeah baby!

That pencil work is excellent I can't really tell what was penciled, the transporters?

Damn that sensor prop/idea is freakin geekgormasmic! I want to figure a way to use that in fantasy genre. Maybe just the chart. Maybe just a bunch of cards "You hear moaning", "You hear voices" Bah! I need to run a sci-fi game now just so I can use that.