I mentioned several times that I was a long time LARP player. 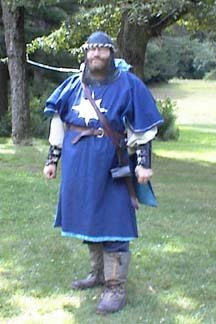 This is me as Endless Star. While NERO Larp didn't have paladins specifically I role-played him as one. This picture was taken around 2000 and shows me with my full set of gear.

From the top to bottom I am wearing

A cloth coif under a chainmail coif that has a two color braid tied with leather throngs through the links. The cloth is blue which is why it looks like I have a blue cap on. But there is chainmail over it. It not particularly heavy and as for weather comfort it is all about the cloth coif. In the summer I wore one that was more absorbment of sweat and in the winter I wore a heavier one to keep my head warm.

The Chainmail would provide some protection in real life as I found out. We were running up a path after a "monster" when we all tripped and fell on each other. There was a huge pile up on the bottom. I felt this enormous pressure on my head which then slid off. When I got up everybody was staring at me. Apparently there was a dramatic rip in the chainmail on my forehead as well as enough mud to show an outline of a footprint. Apparently somebody stepped full force on my head during the pile-up. All I can say after that was "Go Armor!".

On my upperbody I wore a white "Olde Tyme" style shirt that I picked up at a ren faire. Over that was a "plate" breastplate. I put "plate" in question marks because it was made out of the same thick plastic that plastic barrels are made out of it. I do have real armor in form of a "coat of plates." Which are 4" by 6" metal plates riveted to the a thick leather tabard along with two shoulder guards. I been whacked by a 2 by 4 wearing that and aside from the pressure pushing me I felt nothing from the blow. Note this was at home and NOT part of a normal LARP event.

Over this was a belt on which I would hang a fairly large leather pouch. I kept my spellbooks, spare spell packs, string, a penknife, and some other small useful gear. Slung bandolier style is a leather strip that was a saddle belt. From this I hung my weapon holder, the black mug looking thing on my left at my waist. It is a thick cardboard tube wrapped up in black duct tape that a NERO weapons can be slid into. The one time I wore a real weapon (for a photo) I hung the scabbard of this. Also when I am going out in the field for a while I would hang a sack off of this with supplies. Once when I went to a site that we had to camp instead of using cabins I used this as the foundation for carry my gear in on my back. I can also take it off and untie it and use it as a rope to help pull somebody out of a trap.

On my arms I wear a pair of leather vambraces. Never owned anything more protective than that.

Underneath my surcoast there is a part of "plate" leg armor. They cover my thighs and knees and hang off a interior belt I am wearing. They are made of the same barrel plastic as the chest armor.

Finally I am wearing my "Go anywhere" boots. While not very period in construction it is important to have good footwear when doing strenous outdoor actitivies. They work in all kinds of conditions and I love them.

The comfort and manuveurbility of the whole thing? During the summer as long as kept moving I was OK. The layer flexed and flapped providing ventaliation. But if I had to stand for a while, ugh! The flexibility was good, the important thing was to keep the straps in good shape and pay attention to the tightness when putting this stuff on. If you did that you could do backflips in the outfit (Which I did exactly once, still not sure how). However it was heavy and if you didn't have the raw strength you would be quick worn out. A lot of my early versions of this outfit was spent swapping parts in and out to get the right mix. The bucket plastic was a god send in this regard.

I hope you enjoyed this little insight into adventuring gear.
Posted by Robert Conley at 9:43 AM

Hi, What years did you play NERO?

Is that the Ware Mass site behind you in the picture?

The picture was taken at Camp Coffman which is between Franklin PA and Clarion PA. It was taken at my coronation as Duke of Greyhorn. I played Endless Star at the time.

Well...it's a year old reply but you might see it.

I was a member of "Dark Havest", A Door Guard at the Dragon and the Pawn, a member of "The Claw" and a secret thieves/assassins guild that had members that no one would have suspected.

Cool! So did the Assassin Guild actually work out well?