From the Attic: Greyhawk, Harn and Demographics

Tavis in the comments about my handdrawn map of Greyhawk asks an interesting question.

Hand-drawn beauty notwithstanding, the thing I find most interesting is the density of settlements; almost one every other hex at this scale. Some I think I recognize, like Elredd and Fax on the Wild Coast. Were you mostly mapping things that'd already been established in the Flanaess, or were you deducing settlements based on population density?

When I drew the Greyhawk map it was before the internet. My college library was pretty good but nothing like we have now. My main source for medieval demographics was Harn by N. Robin Crossby and Columbia Games. From what I could find it look like Harn was in the ballpark so it was the foundation of how placed settlements in the later maps.

Harn didn't really determine the density I used for Greyhawk. I had a local area map of the Selintan (sp?) River area around the City of Greyhawk that showed the different settlements. This showed that Greyhawk settlements were somewhat more spread out than Harn is.

However the map you see doesn't show everything. In actuality the yellow areas are densely settled areas of culivated land. All that is shown is the main castle/keep/settlement. So what does it really looks like when you zoom in?

Note the only worked examples I have are from my Majestic Wilderlands and I use a 12.5 mile hex for that. 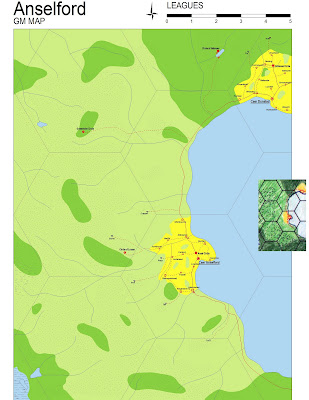 The inset to the right is 12.5 miles (5 leagues) The yellow area are larger because of the smaller hex size. Note a league is an hour's walk.

The bigger hex map show how the culivated land is divided into manor villages and hamlets. Basically the manors are within a 1/2 days walk of the main settlements (Caer Anselford, Caer Dunslad). There are a few mines in the wilderness. Also this map was drawn for a region that was heavily druidic in faith so all the "Circles" in the middle of nowhere.

The main settlements of a country typically are spread from a 1/2 day (densely settled area) to a hard days walk (10 hours) apart.


This map show the larger region the above is taken from. 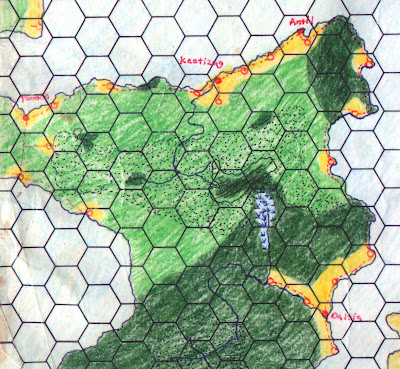 The rule of thumb I use is that every major settlement town/keep/castle. Has 10 to 15 manor villages in the surrounding region.

Between Kestizag and Antil is densely settled. Daltia in the south is also intensely cultivated along the coast and river valley.

The rest of the major settlements are spread out in then again placed a day or so walk apart.

This results from the King or Central Authority trying to defend his land and vassals.

In my Majestic Wilderlands this region was the focus of an active colonization effort several hundred years ago. So I drew the pattern of settlement slightly different than normal. The original frontier ended at Tenoch. To the east and south were the domain of various Orc Tribes.

The initial focus of colonization was Antil followed by Daltia. This is the reason why the population is so dense in those two areas. The remaining areas were the result of the kings trying to link Antil back to the old frontier and Daltia linking to Antil. Anselford and Dunslad are examples of settlements founded to connect other settlements.

So what is a normal pattern? I will get to that in a later post.

An accurate and easy source for gaming Medieval Demographics is by S. John Ross. You can find it here. I also recommend the Magical Society line by Expeditous Retreat Press. Fief by Cumberland Games. And Harn Manor by Columbia Games as well as Harn itself.
Posted by Robert Conley at 11:08 PM

What software did you use for your computer generated map. It makes me think of some maps I've seen for Harn. Very nice and crisp.

Also, your Old School Maps bring back many happy memories of drawing maps and dungeons during lessons rather than listening and learning.

In the last year I developed a similar set of tools for use in CorelDRAW. Now Corel is a pretty expensive program but I found Inkscape to work just as well for mapping. I have a mapping tutorial in the planning stage using Inkscape.

The zoom in is very revealing!

Is there any chance you could break down the big hexes of the zoom map into smaller hexes - either the way Gygax shows in the AD&D DMG outdoor section, where five small hexes fit across one big one, or the way the Wilderlands' Grand Tactical scale works?

A post about different map scales and inter-relationships throughout gaming history would also be much appreciated - I'm not sure I do understand Grand Tactical scale, for example, either how it's mapped or how big an area that represents in the real world for comparison.

I love the fact that you mention and use Harn for inspiration. The maps were what drew me into it initially.

Late to the game here, but the Hard maps were so awesome they more or less just use them in their early Dragon magazine ads and they worked pretty well. Drew me in.