From the Attic: City State 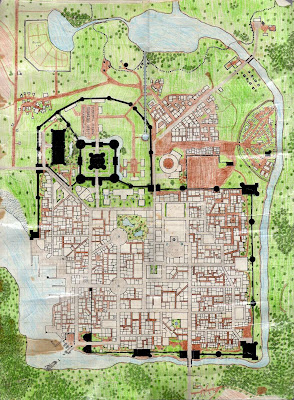 This is the very first Harn style map I ever did for my Majestic Wilderlands. I did this around 1986 on a light table in one of my Geography labs. I was able to laminate this just before the point of irreversible damage as it got heavy use.

I did this because my original CSIO maps were falling apart from extensive use and I had some improvements in mind.

Don't get me wrong the original CSIO map was great. But I felt it could be tweaked even better. The main differences is that I made many of the buildings smaller, cut in more alleyway. Redid the fortifications and walls so that they made sense. At least from my point of view.

I move the Arena to the other side of the road and made a whole new Arena district filled with gladiator schools and slums. (particularly the block next to the refuse dump).

I also redesigned the Goblin Reservation and rebuilt the Wharf district into something that would work better as a port. The area under the docks are entire community unto themselves as hundreds of boats are tied up to the piles underneath.

My Religions for the Majestic Wilderlands are different than the original city state. The big building near the center is the Cathedral of Mitra and other big building to the north is the Hellbridge Temple operated by the Church of Set. I cleared out the building to the south of the Temple to form a square.

The U shape building in the center of the city is the Palace of the Silver Dragons which was the old City Government building before the Tharian Overlord conquered City-State 200 years ago.

Nearly all the old shops are still in the same locations and I use the original CSIO as reference as I never had the time to completely rewrite the whole thing.

I was quite please with this and started the long process of redrawing the entire Wilderlands.

And yes I drew each and every tree that appeared on this map.
Posted by Robert Conley at 6:00 AM

There are some folds and crinkles in the scan. Here is another version that was drawn on my computer. You can use this to see how the problem area looked.

Hmm, I think I prefer the hand-drawn one.