Bat in the Attic 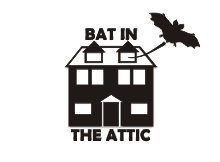 My house was unusual in that our garage had a full attic. By high school it was used for little more than storage by my family. For me it was great as I could have a table with any game that needed to stay up for a long time. We played many long hours of Dungeons & Dragons.

It was a warm summer's night on Meadow Street and there was three of us playing D&D D, H, and myself. We did not notice that another creature had entered the attic.

Suddenly the light from the overhanging bulb flickered as something flew past. Startled we jumped away from the table, "What was that?" H said. "It is a bat!" D said. The bat began to fly crazily around the light. As we frantically waved our hands and rulebooks to wave it off. "How are going to get rid of it!" I shouted.

As bat made another turn D reached down and picked up an old book. One of my Dad’s old thick business directories (they were hardcover back then). We stopped and looked at him in shock when he stepped into the path of the creature. Calmly D eyed the bat and readied the book in his hand. At the last possible moment he let the book fly.

The book sailed through the air and hit the bat straight on. The poor creature was knocked straight back when it hit the wall with its wings outstretched. Slowly it slid to the floor

The three of us rushed up to where the bat laid on the floor.

I knelt down and poked it with a ruler. The bat reacted with a gasp. "No it is alive!".

D looked at the bat, "Well we can't leave it here and I am not going to go near it."

Looking at the other two, H said "Well I not touching it."

I went to the attic door "We don't need to touch it! I got an idea." I rushed down the stairs to the garage itself where hanging on the walls were the snow shovels. I though their large flat blades will be perfect for the job.

Coming back up the stairs I showed them the shovel. "We will use this." My two friends backed away while I used the shovel to carefully scoop up the bat. All three of us went down the stairs to the garage and then outside into the driveway.

In the driveway H looked at the gasping bat "Now what?". D shrugged "It has trouble breathing I don't know blow on it?" We looked at each other and began blowing on the bat. The gasping stopped and the bat began to try to move around.

“It looks better." I said "I am going to toss it and help it get flying." The other two backed off, while I started lifting the shovel up and down. "1.. 2.. 3.." and then tossed the bat into the air. Almost immediately the bat began flying, first to the left, then to the right, down a little, and then forward right into one of the doors of the garage!

As the bat fell to the ground, H quipped "Well that was good."

We advanced on the bat and saw it was still alive. D looked around "Maybe if it had more room?".

"Let’s try it out in the street" I answered. Scooping up the bat in the snow shovel, I walked out into the street. "1.. 2.. 3.." and again I tossed the bat into the air. The bat went left, and then went right, down a little, and then forward and flew away up into the night.

We cheered and when we could no longer see the bat went back into garage, up into the attic and once again entered our world of goblins, dragons, and treasure.
Posted by Robert Conley at 9:00 AM

Hey Rob, glad to see you've got a new home on ye olde internets. Your work is quite inspirational to me in my campaigns, and I'm looking forward to reading more of it here.

Wow. Much better than bats in the belfrey. I'm glad you saved the bat. :)

Hey, I need to talk to you about some content on your main site that isn't accurate. Specifically, I'm the author of the Basic Fantasy RPG, and I'd like to ask you to revise your description of my game on your free RPG list. Please contact me at solomoriah@basicfantasy.org so we can discuss this further. Thanks!