When I released Blackmarsh I made the entire text and map open content under the open game license. When fans of systems like GURPS, Hero System, etc pointed that made it difficult for them to use in conjunction with the permission SJ Games and other companies gave, I added a creative commons license as well. Meaning that you can release Blackmarsh material using the OGL or the Creative Commons license.

I did this because Blackmarsh was meant as a easy to use introduction to a hexcrawl formatted setting like the Wilderlands of High Fantasy. At the time I wrote Blackmarsh, the WoHF Boxed Set was $70 which was a pretty big ask for a hobbyist not familiar with a setting formatted as a hexcrawl.

My use of open license had a benefit that I didn't foresee, namely a giving a pathway for hobbyists in other countries to translate Blackmarsh into another language. A few years back a group translated the setting into Hungarian.

They gave me a PDF link to share.
Marjalnegro

They also had their cartographer do their own version of my maps which looks great. Note they stated with my expanded map which incorporated Wildlands from Points of Light. 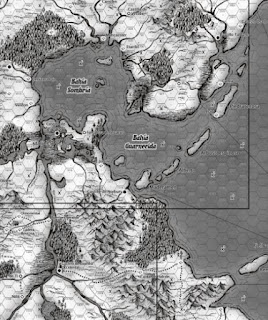 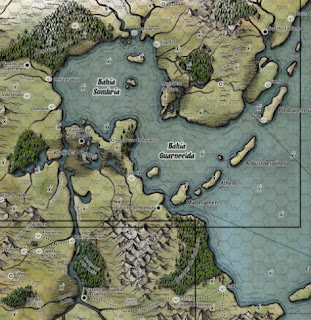 Finally a color version of the above incorporating Blackmarsh into their Eastmark setting. Lots of added details. I particularly like how they added in coral reefs.

Map of Blackmarsh in Eastmark

A job well done to Pedro Gil and the rest of the La Marca del Este team. 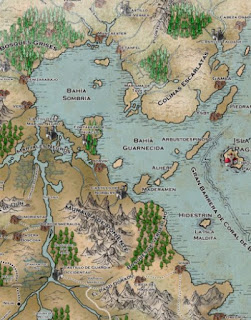 Posted by Robert Conley at 2:31 PM

MarcadelEste is a "must" in the spanish OSR community

I didn't know that thanks for shsring.

Would L-O-V-E to see these maps translated to English. ~O

I'm currently working on a French version of Blackmarsh, called "Fangenoire" (litterally "Blackmire"), a rather faithful translation of your work, I'm just adding an index.

I'll let you know when it's finished, hopefully this spring.
It will be published for free on https://www.drivethrurpg.com/browse/pub/13359/OSR and my other "shops" (Lulu, itch.io).

Thanks for letting me know. I will be glad to post about it when it gets done.