Bat in the Attic Kickstarter Launches 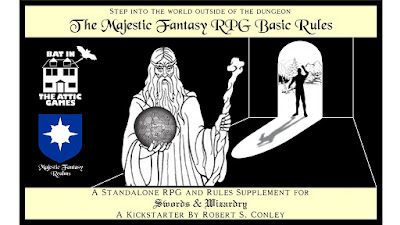 Today I am launching a kickstarter for my latest project, the Majestic Fantasy RPG, Basic Rules.

Preview for the Table of Contents

In 2009, I released a platinum selling supplement that explained the details of the setting I used for my fantasy campaign for nearly forty years. Along with providing details, the supplement contains rules for adapting the material to the Swords and Wizardry RPG and other classic editions of the original roleplaying game.

Since then, I have continued to run campaigns and now have enough material and rules to release a new series of supplements. The supplements together will function as their own system, useful as a tool for running many different types of fantasy campaigns. They will also function as individual supplements to the Swords and Wizardry RPG and other RPGs based on the classic editions.

This reflects the reality that most fantasy campaigns based on the classic editions are a kitbash of different elements that the referee finds useful. So rather than try to compete with the large number of excellent RPGs targeting the classic editions, I decided to format my take in a way that supports kitbashing. While I hope people will enjoy the system I created as a whole, I expect most will pick out just the parts they are interested in, whether it is classes, monsters, or magic items.

However, there needs to be something that ties these different elements together. A supplement that explains and illustrates how these rules work together as a complete system. To this end, I wrote The Basic Rules For The Majestic Fantasy RPG. It covers the traditional four classes of burglar, cleric, fighter, and magic user from levels 1 to 5 along with details on spells, equipment, and combat rules. It also supports the referee by including a list of monsters, NPCs, and magic items for a fantasy campaign. It ends with two sections of referee advice on how I use the elements of the classic editions to construct the rules and to make new rulings to cover the fantastic and unexpected things that players will attempt as their characters. Then it explains how to use the included material to bring the world outside the dungeon to life. 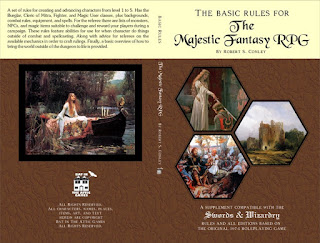 This is one part of this Kickstarter. The other part is a series of printed (or PDF) aids that I use to allow people to quickly generate characters using these rules. This aid is in the form of printed cards or tiles. There is an initial card that you hand the player that outlines how the character generation process works. From there, the players pick a class, a background, and buy equipment using the individual cards as a reference to fill out their character sheet. I have refined this over the past decade while running convention and game store sessions and found that it will allow a player to completely generate a character within 15 to 20 minutes. 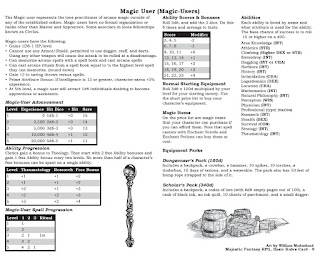 I hope this interests you and that you will support me on kickstarter.

Sorta related question: Where can I find the Lands of Adventure supplement mentioned in Blackmarsh?

So for my own efforts starting with Blackmarsh, I was going to call my series Lands of Adventure. But then I got sidetracked after Scourge of the Demon Wolf into doing the CSIO and Wilderlands maps.

So now I just going to call it the Majestic Fantasy Realms.

https://goodman-games.com/store/product/points-of-light-pdf/
Note that Southlands in the above enjoins Blackmarsh to the South.

Thank you very much! I searched all over for Lands of Adventure :)

Why only up to level 5? Will there be another book to support higher levels?

The meat of the system will be released as a series of supplements. Each covering a major area of the rules. For example the Lost Grimoire of Magic will cover Magic Users (full level range), Magic, and Spells.