Bat in the Attic Kickstarter, Attributes in the Basic Rules 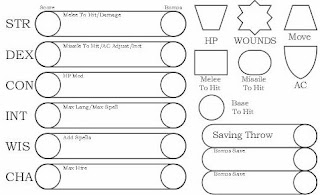 In this series of posts I will be talking about some of the design choices I made. In addition to explaining what the system is about, it will also help folks in deciding which elements are the most useful to them as one of my overall goals is to support kitbashing.

Attributes
The goal is to remain compatible with the various classic editions. When I needed to make a specific choice I opted for supporting the Swords and Wizardry RPG. Thus I use the  same six attributes found in most systems based on the classic editions: strength, dexterity, constitution, intelligence, wisdom, and charisma. In the this section I also discuss several other secondary attribute that most classic edition characters possess like armor class, and hit points.

Attribute modifiers
I put a lot of thought into this. Historically the various editions had several scales of different modifiers. The original edition along with Swords & Wizardry generally gives just a -1 or +1 bonus. The advanced editions generally ranged from -4 to +4. The newest editions opted to give a modifiers every other attribute points for example a 16 score would give a +3 bonus.

I felt that just having a -1 or +1 bonus was too narrow to reflect how attribute impact the things that players try as their characters. Likewise from experence I felt that the -4 to +4 range of the advanced edition, the D20 SRD, and the 5e SRD, was too generous. So I opted for a scale where a character gets a modifier for every three attribute points. With a +1 kicking in at 12, and an 18 granting a +3. This worked out in the campaigns I ran and continues to remain the bonus scale I use.

As far as incorporating different scale, the Majestic Fantasy rules will shift in feel slightly. Adopting the original edition scaled of -1 to +1 will make class and level count for more in what the character can do. Adopting the -4 to +4 scale of the advanced edition will allow characters to tackle greater challenges slightly earlier in the campaign. It start to make a noticeable difference after the middle levels of 6th to 8th levels when the party acquires more than one or two magic items.

The Other Attributes.
I write about how I interpret the various the secondary attributes classic edition character have like Armor Class, Hit Points, Movement, and Saving Throws. One of my goals when I started writing material for Swords and Wizardry is to stick closely to the original mechanics. What helped this was all the new research about the origins of the hobby and the system behind the original edition that started to be released ten years ago. One thing that was clear that the hobbyists of the time were experimenting all the time with different ideas and systems. So as old newsletters were unearthed and anecdotes recounted, I saw some of the thinking that went behind the abstract concepts of mechanics like armor class, hit points, and saving throws.

This help me build a foundation for these mechanics for when I had to make rulings. To answer questions like whether a blow completely missed or was it resisted by armor? Was kind of injury does damage represent? How does a character avoid getting a chalice of power knocked out of their hands? Players can imagine these things happening. It not always relevant but when it is it help to have something on which construct a ruling.

In the basic rules this section is an overview. Later in the rulebook in the chapter on rulings, I get into the nuts and bolts of how make rulings based on these secondary attributes.

Next I will be talking about classes.
Posted by Robert Conley at 9:41 AM