This is the third in a series of posts about some of the design choices I made. In addition to explaining what the system is about, it will also help folks in deciding which elements are the most useful to them. One of the goals of this project is to support kitbashing.

Backgrounds
Due to page count constraints, I focus only on racial backgrounds in the basic rules. I give a brief sketch of Elves, Dwarves, Halflings, Half-Elves, and Humans. The few social details are a composite from the cultures that are part of the setting I use for my campaigns.

In later supplements I will be fleshing out this section by focusing on various cultures and subcultures within the different races. To be consistent with that I labeled this section Backgrounds. 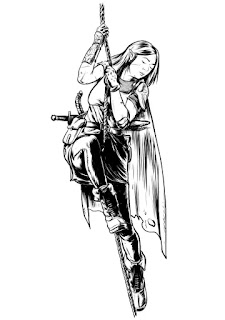 
Abilities
This section details how to adjudicate things that the character can do that doesn't involve combat or spellcasting. It also provides a system to allow characters to be better at things outside of combat spellcasting than other characters. Either through an attribute bonus representing raw talent, or an ability bonus gain from the character's class that represents training and experience.

The base mechanic is simple, in combat or when the consequence of failure is significant roll 1d20 if the players rolls a 15 or better (30%) they succeed at the attempt.  To this roll you can add the relevant attribute bonus (-3 to +3) and the relevant ability bonus. Abilities include Athletics, Climbing, Eavesdrop, Haggling, Herblore, History, Intimidation, Legerdemain, Locution, Mathematics, Natural Philosophy, Perception. Physician, Professional, Research, Stealth, Survival, Strategy, and Thaumatology.

Over the past decade this system has held up well. In general, I require that players to describe what they are doing as their character first then have them roll second. I explain more about this process in the section about rulings.

This system didn’t remain static. I used to have Accounting to represent knowledge about and negotiating large scale trade deals if the character was a merchant type. Then I used Locution for negotiating prices. Feedback from my players made me reconsider this and I folded accounting and that aspect of locution into a haggling ability. Another benefit is that the name fits better with the fantasy theme of the rules.

Another change was to how I granted modifiers. From reading the original rules, I figured the hardest thing that one could do is hit an invisible opponent. The traditional modifier for this was a -4 to your to-hit roll. If circumstance were very unfavorable to what the player wanted to do I would impose a -4 penalty. Conversely if the circumstances were very favorable, I would grant a +4 bonus. For slightly favorable and unfavorable circumstances I would give a +2 or -2.

Then came along Fifth Edition with the advantage and disadvantage mechanics. When you have an advantage, you roll two d20s and take the highest. When you have disadvantage, you roll two d20s and take the lowest. I some session using the fifth edition rules, and the players “got” advantage and disadvantage in a way I never seen with any other the system I used over the last forty years. I adopted this in lieu of the -4, -2, +2, +4 system I was using before. It has worked exceptionally well in the last few campaigns I ran.

The ability system forms a major part of how the Rogue classes work. For the remaining classes, the system is limited to handling things outside of combat and spellcasting. If you choose not to use this then replace the burglar with the classic edition thief and drop the notes on ability bonuses from the other classes.

Basic Rules for the Majestic Fantasy RPG Kickstarter
Posted by Robert Conley at 9:21 AM