This is the fourth in a series of posts about some of the design choices I made. In addition to explaining what the system is about, it will also help folks in deciding which elements are the most useful to them. One of the goals of this project is to support kitbashing. 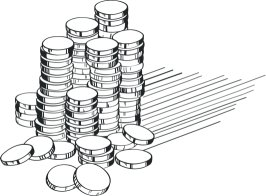 One of the biggest difference between the Majestic Fantasy RPG and other rulesets supporting the classic edition is the use of the silver piece as the basic coin rather than the gold piece. In my early campaigns using the advanced edition, I found that the gold rapidly lost its luster. When treasure was found it gold was common enough that it no longer felt to be special. Through exposure to other settings like Columbia Game's Harn, I found that coinage based around one common type, and one valuable type to be more engaging. I adopted the silver penny as the common coin, and the gold crown which was worth 320 silver pennies as the valuable coin. I had a few other coin types for use by other cultures. For example viking cultures used the 1 1b silver mark worth 240 silver pennies. Since 1990 this system has been a mainstay of my campaigns regardless of the system I used.

I played various forms of live-action roleplaying and medieval reenactments for two decades. I no longer had the time to continue after my kids were born but the internet was picking up speed including Youtube. Youtube has a wealth of videos where various reenactors try out medieval weapons to see how they work. When I started using Swords & Wizardry I wanted to use some of that knowledge to make the different weapons distinctive but not at the level of detail other systems had. So I tried various things and eventually settled on the current system of describing one or two special characteristic for each weapon.

For example a battle axe is not the two bladed axe that is commonly depicted in fantasy art The battle axe has a large single blade with the bottom longer than the top. This give it the ability to be used to pin an opponent's weapon or shield. A mace is particularly effective against chainmail or gelatinous creatures. A poleaxe give the wielder a free attack when a enemy combatant first comes into range to represent its longer reach. In each case I try to keep it simple to reflect the spirit of the original editions and not to over complicate the system.

In addition to above I provide descriptions for Armor, Dungeon Equipment, Horses, Dogs, and Hirelings.

Magic
This section details common rules for magic: magical immunity, memorization, rituals, and spellbooks. There are two main differences from other classic editions rules. First I divide the magic resistance percentage by 5 and used that is a bonus to a 1d20 roll. So a creature that had 50% magic resistance would now have a +10 magical immunity. You roll 1d20 and if the modified roll is higher than a 20, the spell or effect is resisted. If you like percentages just multiply the modifier I give by 5% and use a d100.

Rituals
The other big difference are magic rituals. A ritual allows a spellcaster to cast any spell they know (spellbooks for magic users, spell list for clerics) and cast it as a ten-minute ritual as long as you have the required amount of ritual components at hand. As I mentioned before if this makes your campaign too magic rich you can omit this. 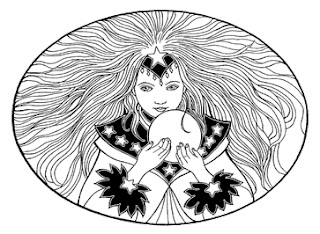 Spells
This section is perhaps the least changed from Swords & Wizardry. There are a few tweaks. Some spells I tweaked the mechanics into something that worked the same but was more playable in my judgment. For example the effect of the sleep spell is now 4d4 HD with a maximum of 4 HD creatures affected). There are some additional spells like Commmand that are not present in the Swords & Wizardry core rules. Finally there are new spells like Scryguard which protect an area from divination spells. It is a spell especially favored by Foggers, illicit magic users working for the criminal underworld of a city state.

Each spell has a note whether it is effected by magical immunity or not. Magical immunity protects characters from spells like charm person or detect thoughts which use magic to directly affect a target. While it doesn't protect from spells like fireball or magic missile which work by creating something that does the actual damage to the target.