First is version 4 of the character sheet I been using since I started running campaign with Swords and Wizardry and my Majestic Wilderlands supplement.

My idea with this character  sheet is to make it a booklet of its own. You print it off and fold it in half. The interior remains blank in order to record whatever notes you need and the front and back are filled out. 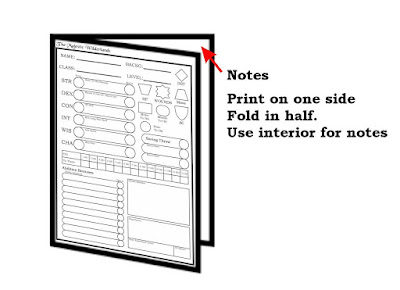 My players seem to like them and more than a few have the interior packed with notes, reminders and lists.

The second item is that I sat down with Erik Tenkar of Tenkar's Tavern for one of his Fireside Chats. It is packed with details on the Majestic Fantasy RPG.

Although I have to warn you that the first couple of minutes are more of advertisement for Necrotic's Gnomes current Old School Essential Advanced Fantasy kickstarter. Congratulations to Greg Norman and his team for storming out of the gate with their kickstarter as they continued to expand Old School Essentials.

A Fireside Chat with Rob Conley of Bat in the Attic Games.

Last but not least, I have reached over 170 backers and $2,000 pledged. I am humbled and pleased at the support shown. I thank everybody who came on board. This supplement is the first in a series so anything extra will mean that I am that much further ahead lining up what I need for the next supplement.

Basic Rules for the Majestic Fantasy RPG Kickstarter
Posted by Robert Conley at 9:33 AM