Points of Light Borderlands and the Scourge of the Demon Wolf

Recently I was asked this question about combine two things I written, the Borderland setting from Points of Light and Scourge of the Demon Wolf.


Hey Robert, I've been reading Scourge of the Demon Wolf and it occurs to me I might want to attach it to a side of the Borderland setting from your Points of Light book. Do you have a quick thought about how you would staple the two together?


The Borderlands
For those you don't know Borderlands is one of four hexcrawl formatted setting in Points of Light. It depicts a time period when the Bright Empire was torn apart in a religious and political civil war. A conflict between factions supporting Sarrath the God of Order (Lawful Evil) and Delaquain the Goddess of Honor and Justice (Lawful Good).

In the setting the civil war has been going on for a few years. Parts of the region are divided between the faction, parts are devastated, and parts are neutral just trying to hang on. 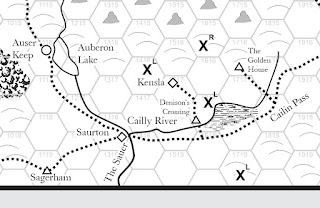 1416 is the Beggar Camp
1615 is the sacrifice site
1617 is the Bandit Cave in a bluff overlooking Cailly River and the swamp.

The Church of Mitra in Kensla would now be a Ecumenical Imperial Church of the four Gods with the statue of Delaquain removed. The personality of the priest remains the same. The bailiff that was killed was an agent of Divolic and an adherent of Sarrath and there is little love for him in the village.

An alternative start is that a cleric or paladin gets a call from Veritas, Thoth or Delaquain. From the call the party starts with knowing that it has something to do with the Sheriff Melan of Saurton being thrown in the stocks in Darcion. Since the stocks are in the public square the party could question the sheriff which will lead them to Kensla and the adventure.

Once again the party will have to decide what to do with the information about how mage are connected to the Demon Wolf. Except this time they are nominally the "good" guys.

Finally a start I didn't mention earlier was that the characters were sent by the Duke of Stoneburg to Darcion to investigate why Sheriff Melan was thrown in the stocks. It would be similar to the above but without the religious overtones. Since the Duke has the support of the remnants of the old imperial church and the still loyal priests of Thoth and Veritas. The resolution of the adventure could be the foundation for an alliance between the Duke and the mage of the Golden House. 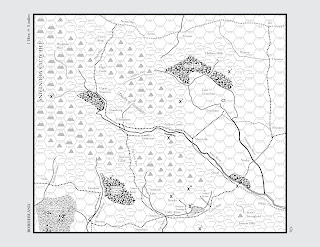 Wrapping it up.
As a general note, all the Points of Light setting and Blackmarsh are part of the same loose background. Although set in different time period. Borderlands is the earliest time period depicted set during the civil war that ripped the Bright Empire apart. Wildland represents the aftermath after the collapse of the empire. While Southland and Blackmarsh are set in later centuries during the rise of the Grand Kingdom.

My conception is that is a surviving remnant of the Bright Empire much like our own Byzantine Empire. The empire s dominated by the Church of Sarrath whose traditional color is orange hence its name the Ochre Empire. It not a pleasant place to live.

Thanks for this post! I like both your Points of Light setting and the scenario - I ran both of them (Borderlands and some others). Now I'm starting to think about running them again. :)