Columbia Games has launched a Cities of Harn kickstarter. Harn is a fantasy medieval setting that been in publication since 1983. It second product was called Cities of Harn and detailed seven cities on the island of Harn (Aleath, Cherafir, Coranan, Golotha, Shiran, Tashal, and Thay). Each city had a map, some background, a listing of two to three dozen businesses, and a handful of building mapped out and detailed including castles. All tersely described.

It was a popular product largely because it was medieval fantasy. Which made it easy to adapt to one own fantasy setting. I used just about of the cities to represent various towns and cities in my Majestic Wilderlands.

For example I used the Harn City of Shiran to represent Gormmah a capital of one of the factions in the Viridistan Civil War. 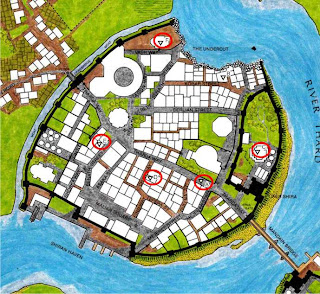 There are a couple of things you should be aware of.

PDF Only
It is PDF only. The purpose of the kickstarter to fund art and writing to expand the original cities. In recent there been a concerted effort by Columbia Games to get everything for Harn back in print. Along with updated to the latest standards that has been set for new Harn Articles.

Mainly for location like cities is that we get a tad more on the personalities and motivations of the NPCs and more fleshed out buildings and interiors.

The Price
At the $1 level, Columbia Games will give you the PDF for the City of Shiran, before the kickstarter ends. The reason for this is because Harn material has always been priced at a premium level. Which can be a tough sell. The Harn material is good but it is that good? Doing the kickstarter this way hopefully will entice to you get to buy into one of the higher levels if you like Shiran.

However the $1 for the Shiran is a sweet deal for what you get.

Is Harn worth it?
For me the answer has been yes, however I do what I can to cut cost due to their pricing. I am a Harnquest subscriber which dings me $20 to $30 four time a year and gives me the latest releases and half price on their PDFs. And I take advantage of sales when they come up.

And the fan support for Harn is second to none at Lythia.com.

Just look at the crazy stuff that has been posted for just one of Harn's city: Tashal.

I've always loved Harn. It's second only to Wilderlands as my preferred campaign setting. We ran a campaign for years in Harn using our own universal role-playing system rules. Good times.

I want. Just have to decide how many ducats I can afford to drop.