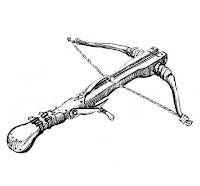 My friend Chris over on Clash of Spear on Shield talks about Sling damage versus Large creature. Particularly how sling damage increases versus large damage and how he finds issues with that idea.

Which leads to a wider question of the consequences of the different options for modelling weapons, injury, and armor class in various editions of classic DnD.

Recap
In Chainmail man to man combat the odds of an opponent be killed was found on a chart cross indexing weapon versus a specific type of armor. You roll that number or higher on 2d6 and the target was killed.

This element was not in the original release of the 3 LBB (Little Brown Books) but worked it way in with the release of Greyhawk. There it was presented as a weapon versus AC chart. Using the chart would result in a modifier (or not) to your to-hit roll if you were using that weapon versus that armor.

The chart is derived from the man to man chart in Chainmail. Basically that was a 8 or better to hit was a +0 modifer and the rest were calculated from there. Although Gygax tweaked the number as it doesn't quite line up with the man-to-man chart.

Greyhawk also saw the introduction of variable weapon damage where each weapon used a different dice and/or modifier. Along with a different set of damage for large creatures.

Finally in ADnD we see weapon length, weapon space requirement, and weapon speed factors. Weapon length explicitly defined how far an opponent can be attacked, and weapon space defines how small of a space a weapon can be used effectively. Weapon Speed factors only came into play if initiative was tied and could result in multiple attack for the wielder of the weapon.

The State of the Mechanics
Not all of these mechanics found their way into people's campaigns. Either back then or today. Of these varying weapon damage is the one that is most commonly used. A different set of damage versus large creatures is not found as often. Weapon Length is sometimes a factor especially if the weapon is clearly a polearm meant to be used in the 2nd rank or further back. Weapon space requirements is also run on an ad-hoc basis.

Weapon versus AC may be a little less popular than Weapon Speed Factor but not by much. Both are are generally not used. Weapon vs AC involves yet another chart lookup, and Weapon Speed Factor was part of a initiative system so poorly understood that there are two separate interpretations and  multiple page documents to attempt to explain them.

My Take
So when it comes to my Majestic Fantasy Rules, my reasoning was a follows. The core of combat is the to hit roll versus Armor Class. It bundles actual contact with overcoming the armor into a single roll and an essential part of how classic editions work.

I think varying weapon damage is the way to go. Injury is caused by force. Force is determined by mass time acceleration. Different weapons have different masses and are designed differently to channel that mass into force. So varying the damage dice for different weapon is a good way to model this without getting overly complex.

Because damage is a result of force, which equal mass time acceleration, it doesn't make sense to me to vary damage for large creature. Instead a more straight forward method to give them more hit point or hit dice to represent their increased mass. Luckily classic DnD is consistent with this with the various giant versions of creatures so I don't have to do any work in this regard.

As for weapon speed I prefer individual initiative where everybody rolls 1d6 plus bonuses. High roll has the option of acting first. The classic weapon speed mechanic has little relevance for me as it tied tightly to the ADnD initiative system.

While I think that Weapons versus AC is one chart too many, I think the concept is sound. Different weapons are designed differently and some are more effective than other against certain types of armor. Despite the abstract nature of classic edition combat, it at level that I think a light touch would be add something to combat.

I opted to handle this by noting any special bonuses in the description of the weapon. For example maces gets +1 to hit versus opponents wearing chainmail or gelatinous creatures like ochre jellies or black puddings.

This method allowed to add other interesting attributes to weapons with a similar light touch. For example an axe can be used to pin a weapon if the opponent fails their saving throw. Something I learned from reading how axe were used throughout history. Typically this is followed up by a blow from the shield or a takedown after grappling with the opponent.

You can read my take with the either of the following two free downloads.

One of the benefits of being larger is, presumably, more hit points. I don’t like the idea of different amounts of damage per size.

This is not based on any historical antecedent. It’s just what I do.

Actually all my weapons do 1d6 with some modifiers for class, two hands, etc.

Our group started out using the very simple weapon speed system from Holmes' Basic - Daggers get 2 blows per round, longswords 1, and 2-handed swords 1 every 2 rounds.

When the Players Handbook came out the summer of 1978, before the release of the Dungeon Master's Guide and related initiative explanation, we naturally assumed the 'speed factor' of weapons indicated the number of 6-second segments within a 1-minute round it took to wield the particular weapon.

Literally for 25 years that is the way we used speed factor - SO MANY SWINGS! Our interpretation super-advantaged thieves with daggers (who remembers "La Machine" food processors?). Essentially, after initiative we counted through each round segment by segment for spells and attacks.

I agree that weapon speed factors and weapons vs. armor type go a bit too far. While they model something, I'm not sure they contribute something meaningful enough to play to justify the additional in-game table look-ups.

The difference with damage by target type is that this does not slow the game at all since there is no in-game look-up (assuming people actually write the two damage numbers down on their character sheets to begin with), and it does have some impact on play in that it specifically gives fighter-types a bit more love (and thieves, too, if the DM allows the thief to hide in shadows, move silently and climb sheer surfaces while lugging around a long, heavy weapon) since they're the only ones that can use the weapons that do heavier damage vs. large creatures.

Apropos of nothing, yesterday I got to see the working Van Helsing repeating crossbow prop from the 2004 Hugh Jackman movie.

I've known fencers and other martial artists most of my life. One thing that has always struck me was that what really mattered in a one-on-one or skirmish level fight really wasn't the weapon, but the wielder. Sure, some weapons (like the spear) could make things harder for the more experienced fighter, but it was all pretty much down to who was the better fighter, not the weapon.

Most of our assumptions about FRPG weapons are based on mass combat, not individual or skirmish level combat as we see in most FRPGs. Thus, I prefer the universal damage die. It allows players the freedom to choose weapons that fit the character rather than weapons that take advantage of the system.

BTW, in terms of a sling doing more damage to large creatures, has everyone forgotten David and Goliath? Just saying...

Quite germane - all weapons are deadly. They all kill and potentially in one blow. A single damage die that matches the size of the hit die is perfectly appropriate and especially for the level of granularity we use in D&D.

Love the universal die. Use whatever weapon you like. Gary didn’t list “a weapon” in the gear section. He listed various specific ones. Even though they all did 1d6.