What it is?
A boxed set available only at Target for starting out with DnD 5th edition. Includes rules, aides, and an adventure.

The Details
The rules are far more complete than the DnD Starter Kit. They describe five character classes Bard, Cleric, Fighter, Rogue, and Wizard up to 6th level. An addition are rules for sidekicks which clearly not only play the role of traditional hireling but also as additional adventuring companions for smaller groups. The rules go into how to level sidekicks. There are three categories of sidekicks; Experts, Spellcasters, and Warriors.

The aides include a doubled sided poster maps of the Sword Coast around Neverwinter on one side and the village of Phandelver on the other. A set of cards that are mostly magic items but also include initiative tracking, condition tracking, sidekicks, and quests. There is a referee screen, and six character sheets.

The adventure, Dragon of Icespire Peak, takes place in and around Phandelver much like the Lost Mine adventure in the starter kit. In general it is a set one session quests combined with tables to determine where the adventure's antagonist, Cryovain, a young white dragon, is at when the party travels.

The quest structure comes off a bit like a video game however it also a structured sandbox. It start off with two quests available on the "job" board in Phandelver and then goes from there. The quest, the town descriptions, and the random tables governing the dragon all point the party to a confrontation with the Cyrovain and the conclusion of the overall adventure.

Honestly for something that trying to get a novice going, this adventure is well down for a potential sandbox adventure. If the referee doesn't get it right away the quest structure will keep things going in a way that fun and feels like progress is being made. For referees that want to branch out there is enough in adventure and the boxed set to do so.

I will say that most of the adventure location are fairly fleshed out. Many are  complete small dungeons or adventures.

Yeah but I am not a novice
While a bit pricey as an expansion, this in conjunction with the Lost Mines adventure found in the Starter set makes for a very nice campaign. With two primary antagonist and a wealth of locations to explore nobody is going to feel railroaded or hemmed with the combination.

And the digital
DnD Beyond is the official digital platform for D&D fifth edition. There is a lot not to like about the business model as it could "go away" at any time because all their content is hosted on their server. Thus when they go away, the content will go away.

But the app and website make looking up stuff convenient on your computer, tablet, or smartphone. Very convenient as I been finding out.  Enough so that there may some merit of doing something similar with the various retro-clones of the OSR.

The DnD Essential Kit comes with two codes. The first allows you to buy the 5e PHB on DnD Beyond at half price, the second gives you the Dragon of Icespire Peak for free.

In playing around with this, I learned that you can add the DnD 5e basic rules to your app or account for free. With the Dragon of Icespire Peak adventure you get a substantial peak of how the functionality of DnD Beyond works.

Like looking up specific spells, abilities, or classes, I can quickly zero in on a location within the adventure. With the website I can also pull up images of not only the keyed map but also a player version that I can save and use with Roll20, Fantasy Ground, or print out for the table.

For example the map for a mine adventure 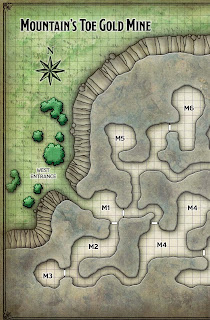 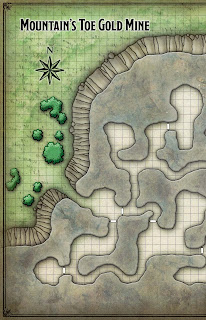 Overall I was pleased at the functionality and convenience but it definitely optional. My recommendation is to try the Basic Rules and above adventure if you get the Esstentials Kit and see if it is for you. I opted to get the PHB for half off as I know I would use it. I just got a smartphone and it proving far handier than I thought it would be. This just adds to the functionality of the device.

Wrapping it up.
I consider the Lost Mine of Phandelver one of the best DnD adventures ever made.  The Dragon of Icespire Peak isn't quite up to the level of the Lost Mine however it function very well as an expansion to that adventure.

The Essential Kits does way better on the rules presenting levels 1 to 6 of five different classes in conjunction with the various packaged aides. I would recommend this for anybody starting up with tabletop roleplaying.

I agree on the job board aspect of the adventure, but at least it is not a railroad.

As a novice I am not sure how easy it would be to buy this and the beginners book and intigrate the two modules. There is minimal advice and more cross promotion in the Essentials box would have been smart marketing.