A tale of two OGLs 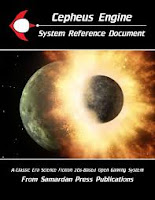 Once upon a time Wizards of the Coast released the Open Game License and made the text of the D20 System Reference Document open content.

And the hobby and industry had a fit. At the same enthusiastically embracing it. Since then a variety of RPG material has been released as open content. Along with those that have negative view of the use of the Open Game License.

That dynamic is still in play in the hobby and industry.

Traveller and Cepheus
In 2008, Mongoose release Mongoose Traveller. It was accompanied by a System Reference Document, and a trademark compatibility license. Along with a license and outline of the Foreven Sector that was part of the Third Imperium setting. The Foreven license allowed 3PP to create content for the Third Imperium as long it was set in Foreven. The Traveller SRD was expanded to include material from Mercernary and High Guard.

Then in 2016, Mongoose released a 2nd edition of their Traveller RPG. It did not have any open content under the OGL. In addition both the traveller compatibility license and the foreven license were sunset.

It is important to note that Mongoose didn't and can't sunset the open game license for any open content they released.


4. Grant and Consideration: In consideration for agreeing to use this License, the Contributors grant You a perpetual, worldwide, royalty-free, non-exclusive license with the exact terms of this License to Use, the Open Game Content.

In the place of the compatibility license and the Foreven License, Mongoose worked with Onebookshelf to setup a Community Content program for Mongoose Traveller 2e 3PPs called the Traveller Aid's Society. Moreso this program open up the entire Third Imperium setting for 3PPs.

The restriction was that any works could only be published on the site, and once published they have to part of the site forever. They could be removed from sale but you couldn't pull the work and sell it elsewhere even with the Traveller IP scrubbed.

A problem was found in the license that all OBS Community Content program share. A clause stating that any derivative work also can only be posted to the site.  This meant that if Gypsy Knight Games had posted their Clement Sector setting to the TAS site, their setting IP was forever locked in to the Traveller Aid Society.

This was unacceptable to most of the Traveller 3PPs in 2016 when the program was created. At first the various publishers continued to use the Mongoose Traveller 1st edition SRD and removed the compatibility logo. Similar to what happened when the D20 Logo license was sunsetted by Wizards.

Then in the summer of 2016, Jason Kemp created a Traveller clone called Cepheus. Some of it is his original work the rest is material culled from the following list.

Runequest and Legend
In 2006, Mongoose released Mongoose Runequest after licensing the trademarks and Gloranth setting from Stafford's Issaries. This too was accompanied by open content under the OGL and a trademark compatibility. It represent Mongoose first major stab at doing this outside of their previous work with the D20 SRD. In 2010, a 2nd edition was release along with as updated system reference document.

After losing the trademark and Glorantha IP license in 2011, Mongoose scrubbed their rules of any Glorantha IP and released it as the Legend RPG. There was no system reference document as the text of the entire book was declared open content. Mongoose also expanded the amount of open content for the RPG through the Legends of ... series of book.

But the story doesn't end there. In 2015 Chaosium runs into trouble. Stafford, and Peterson two of the original people involved decided to return and take a active hand in the business. A new team was formed. With Stafford's return, Chaosium regained the license for Runequest and Glorantha. The license with Design Mechanism was sunsetted and the two authors were forced to rebrand as Mythras.

What happen with Traveller
At first there was a bit of a uproar among the Traveller hobbyists, however this was quickly settled by Marc Miller when he authorized the creation of a Cepheus Engine subforum on the official Traveller forums. While not quite an official stamp of approval, Cepheus now had a place within the Traveller community.

Cepheus compatible material has continued to expand and cover quite a bit of science fiction unrelated to the Third Imperium setting. Both Mongoose Traveller 2nd edition and Marc Miller's own Traveller5 continue to be worked on and have fans among the hobby. In short the Traveller hobby is thriving in a variety of areas.

What happen with Runequest
Despite losing their license Pete Nash and Lawrence Whitaker continued to release material for Mythras. They both well respected for the quality of their work.

There are few people using the Mongoose Runequest/Legend Content like OpenQuest over on D101 Games. But third party based on the three SRD that Mongoose released are scattered among different tags and are often mixed in with other system like Zweihander. From reading the various related forums the 3PP using open have not be embrased by BRP hobby.

In fact Chaosium is actively discouraging people from using any of the release by spreading uncertainty and doubt. This is from their FAQ.

Q: Is there a System Reference Document (SRD) for Call of Cthulhu, RuneQuest, Magic World, the Basic Roleplaying system, Pendragon, or 7th Sea?
A: No.

Q: Can I rely on the Mongoose RQ SRD to publish material?A: No. Mongoose’s license for RuneQuest was terminated in April 2011. At that point, Mongoose lost all rights to continue using the RuneQuest trademark, or to create and publish material derivative from the previous copywritten material, or to issue any sublicenses based on that agreement. Since Mongoose no longer had any rights to RuneQuest, it has no ability to issue a third-party license to that material (which is all an OGL is).

Everything up to the last sentence is accurate.  The problem is that Mongoose didn't release anything as open content based on the trademark and Glorantha IP they license. Mongoose created that themselves undoubtably relying on their knowledge of IP law and their attorney to come up with a system that was similar to that of the original Runequest and Basic Roleplaying System.

That they had right to release under any license they choose and did so as Legends RPG. The entire text of which is open content.

Chaosium compounded this by posting this on their official forum.


To the extent someone has made an original work that is not legally derivative of Chaosium's IP, of course they have the right to do with it as they will, including issue a perpetual OGL. That's the WotC OGL - WotC owned D&D outright and could do with it what they wanted, including issue perpetual third party licenses. However, Mongoose's license for RuneQuest was limited in duration. You can't license to others more than you actually have. So when their RuneQuest license was terminated, any licenses they issued under that license died with it.

Edit: I wrote further on the details of the various Runequest SRDs in A D100 OGL Carol

Wrapping it up
For a long time the dynamics of 3PP with Traveller and Runequest was the same. There was a dominant publisher or two that the majority of hobbyist looked to for new material. There a few 3PPs but most labored in the shadow of the dominant publisher.

The situation with Runequest continues to be like that with the major exceptions of Design Mechanisms and D101 Games. However with Traveller the fiasco with the TAS Programs was a kick in the pant to 3PPs. Provided just enough of jolt to have somebody finally get a legal traveller clone together and release.

I sincerely hope that Chaosium does not take the step of issues DMCA notices. Along with  cease and design notices. On the flip side, hobbyists who are fans need to release that the BRP RPGs that Chaosium rely heavily on their setting IP, Glorantha and Cthulhu. Those settings are a crucial part of their appeal.

While Cthulhu may be public domain, the stuff that makes Call of Cthulhu take on the mythos unique is not. All the things I mentioned about SRD and open license are easiest used for one's own original idea or setting. Otherwise I would talk to an IP attorney if want to so something involved with Cthulhu.

I hope you found this informative.
Posted by Robert Conley at 11:19 AM

I have to think that legally Chaosium would have been required to act far sooner, like almost immediately, after they cancelled the license.

I have also read that mechanics can't be copyrighted or trademarked but certain specific things (such as the BRP Resistance table) can be. Since Legend has no Chaosium trade dress and is just mechanics (and does not include that Resistance Table)... well if this interpretation is correct they should be in the clear.

Personally I think Chaosium is making a mistake here. They should be trying to create a community and not chase people away when GURPS and the many D&D versions are there waiting.

Just as a general point with copyright the things that lost by waiting are damages. You can always sue or give notice to cease & desist distribution even years later.

It is trademarks that has provision that you must act immediately or you lose your rights to it.

Greg Stamford blew up the fan community around the he was hawking Heroquest. I think the license protected his intellectual property while allowing him to poach any good ideas that fans came up with. The vibrant zine and web scene for Runequest was gone in less than six months. Chaosium is just following well established precedent here.

Thanks for posting this, very interesting read. I think that the SRD has been one of the great strengths of D&D, allowing 3PP to produce varied and interesting content, it's a shame that some other gamelines can't or won't get on board. Whilst I can understand people wanting to protect their IP, I think red-tape and increased legal confusion only harms the hobby in the long-run.

Could you imagine the bad feeling that Chaosium would generate if they went after the Design Mechanism and D101 Games - which, lets face it, is going after Newt, Pete, and Loz as individuals, three people who have helped keep d100-based (and Gloranthan) gaming going.

Very enjoyable read. I will point people here this week on my blog/podcast.