Yesterday I posted what a Majestic Realms character looks like. As you can see it is rooted in the Fate/Fudge family of RPGs.
Note: 4dF produces a range from -4 to 4 in a bell curve. You roll +0 or higher 63% of the time. 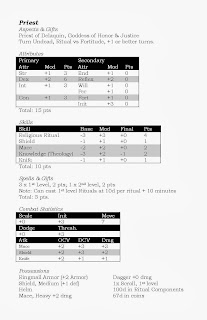 I picked the priest because it show all my planned elements in a single character.

Aspects
I will get to this later in the post.

Attributes
This part echoes GURPS the most. I picked Strength, Dexterity, Intelligence, and Constitution. The secondary attributes are Endurance, Reflex, Will, Perception, Fortitude. Each of the secondary attributes are based off of a primary and can be raised and lowered from there. There is one derived attribute Init which is your Dexterity + Constitution.  I opted for GURPS 3rd Edition version of basing Endurance off of Srength (Fatigue) and Fortitude off of Constitution (Fudge Hit points sort of).

Spells and Gifts
I will explain gifts when I talk about Aspects. Spells are bought as spells slots that work just like Swords and Wizardry. You memorize a spell for each slot (duplicates allowed) and after you cast it you have to rest for 8 hours plus 1 hour of study. The spell slot have to be bought in a pyramid until you have four spells in a level. Then you can have a equal number of spells in the level above. For example 4 1st, 4 2nd, 3 3rd, 2 4th, and 1 5th is a legal pyramid.  I will have copious example to make this clear. It is the system I used when playing NERO LARP and it works well at replicating DnD style vancian magic with a point based system.

Combat Statistics.
Scale is straight out of the Fudge rules. Basically each level of scale is 150% heavier and/or taller than the level below it. It is added to damage rolls and damage resistance rolls as well as strength rolls. It is a very elegant way of handling creatures of disparate size.

Threshold is based on your Fortitude + Armor Bonus.

Combat involves everybody getting two actions in the order of a 4dF+Init roll.
To Hit = +1 or better on an Opposed Roll of your OCV versus your opponent's DCV or Dodge.
Damage = An Opposed Roll of Damage versus Threshold plus the margin of success on the to hit roll.

Aspects
This I borrowed from Fate. However I use it differently. Aspects are used to define the background and personality of the character. They are also prerequisites to Gifts and Complications which are may have a mechanical impact. For example to be able to cast divine spells you need to take an aspect that says the character is a priest of some deity. I arbitrarily said that in the Majestic Realms taking this aspects gives you the ability to buy and cast divine spell slots, and it gives you the give of being able to Turn Undead. Both of which are defined by a set of rules I wrote.

In addition being a priest of Delaquain brings in some complications like being a member of church's hierarchy and having to adhere to a code. For those of you with the Majestic Wilderlands supplement Delaquian is the Majestic Realms name for MW's Mitra.

Note the "I arbitrarily said". Majestic Realms aspects are meant to reflect how the setting of the referee works. If something is not covered by a skill or an attribute then make it an aspect. The only requirement is an agreement between the player, and the referee. If a referee and his players feel it OK for one player to be very wealthy and the rest are his employees then have everybody take the appropriate aspects to make this happen.

So what about points? In the 20 years of playing GURPS I fine that most campaign start with the players talking among themselves about what they want to play. This is a result of the wealth of options that GURPS provides. There is so many that to keep things that they organize things among themselves to make complimentary characters. This is without me prompting them, it just how GURPS (and Hero System for that matter) seem to work among a group of mature roleplayers. The downside of GURPS, character creation always winds up involving searching the disadvantage list to get the bit of allowed points. Even when you have everything you already need.

In Swords and Wizardry there are no mechanics for character background other than to pick a race and/or class. If a players decides to be poor it because they wrote it down on the back of their character sheet. Or if they are a noble it because the referee and the player came to an agreement that this was OK.

I think Swords and Wizardry is little too loose and GURPS a little to formal. I think the general idea behind Fate's Aspect is a good balance between the two. So I jettison the metagame Fate point mechanics and retained the idea of Aspect as prerequisite to various benefits and complications.

Because of my experience with GURPS campaigns I am not going to bother charging points for aspects as most of the time players and their referee wind up hashing things out anyway as part of getting the campaign going.

Now a mistake of many "generic" system is that they give you the mechanics and the ideas but little in the way of worked example. I am going to provide a complete ready to run implementation of all these ideas. Largely based on the style of fantasy I been running for the past 30 years. Some of which you seen in the Majestic Wilderlands Supplement, Blackmarsh, and Scourge of the Demon Wolf.

And it going to take a while I expect to release this no earlier than next fall. In the meantime I got other projects to complete that I owe people for. But I will keep you posted and eventually release a beta.

So far it has been an interesting experience and I learn a lot about some interesting games like Fudge and Fate.
Posted by Robert Conley at 6:00 AM

!!! Wow. I've been toying with very similar concepts myself, using the 4dF bell and everything.

I'll be following this closely.