The Majestic Wilderlands Supplement was just that a supplement. Anything it didn't cover you used the Swords and Wizardry core book. In practical usage that is a bit of pain having to flip between the two. I now understand one of the primary motivations to collect all the ODnD books into ADnD 1st edition. I am just dealing with two books here and not the six+ books of the ODnD series.

So the core classes will be in now. And the first up is Fighting Men.  In Sword and Wizardry, Core that was just Fighters. In the Majestic Wilderlands that also included Berserkers, Soldiers, Paladins, Knights, and Myrmidons.

In the four years since the release of the MW Supplement, those classes have held up rather well. A major addition I made was that they all add their to hit bonus to their initiative die roll in addition to their dex attribute bonus. Coupled with that change monster received a initiative bonus equal to half their hit dice rounded down.

I also made a ability progression chart and placed at the beginning of the Fighting Men section. There was some text at the end of the explanation of ability that gave the progression for each of the SnW core classes but that quickly proved to be too much page flipping.

As for abilities, note that Athletics is used for the typical checks that high strength character get for break doors, bend bars, etc. Athletics is modified by your class bonus, if any, and your strength bonus. That why there is no chart for those actions in the section on the strength attribute.

Note that for the next view post on character classes I will be only be posting things that are changed. If it is not posted then it will be the same in the current supplement. 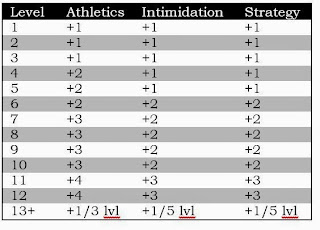 Fighters
Fighters are warriors, trained in battle and in the use of armor and weapons. You are on the front lines of your adventuring party—going toe-to-toe with dragons, goblins, and evil cultists, hacking your way through them and taking the brunt of their attacks. The Fighter character is best-equipped to dish out damage and absorb it. You serve as the sword and shield, protecting the weak and taking down your enemies. One day they will tell legends of your battle prowess, and followers will flock to your castle stronghold where you revel in your fame, riches, and newly earned nobility.

• A Fighter gains 1D6+2 HP/Level
• Use any Armor/Shield, any Weapon
• The fighter’s to hit bonus is added to their initiative roll.
• Against any creature of 1 HD or lower you make 1 attack per level each round.
• A character with a Strength of 13 or better will gain +5% to any earned experience.
• At ninth level, a Fighter may establish a stronghold and attract a body of men-at-arms who will swear their loyalty to the character as their liege. 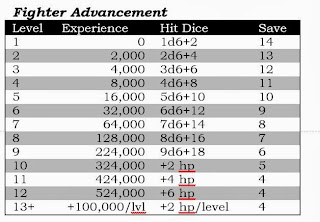 Posted by Robert Conley at 9:59 AM