Thieves of Fortress Badabaskor for $1 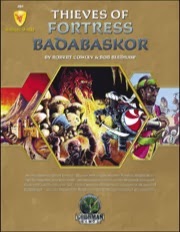 Paizo is selling print copies of Badabaskor for $1. It was the first print product I was responsible for. I did the maps for all three of Goodman Games Judges Guild products.

In Badabaskor I tried to remain faithful to Bob Bledsaw's original modules. I did alter a handful of area in the dungeon but for the most part left things as I found them. The main additions was taking the original sparse entries and tying them together. Resulting in a Bandit town sitting on top of a dungeon of clerics who worshipped a demon god which was once a fortress of the Dragon Kings of a long dead empire.

Just picked it up - it looks great and now sits next to its well-worn ancestor on the bookshelf.