Last Monday I ran the third playtest of a fudge based Majestic Wilderlands/Realms*.

*I intend to write the ruleset for general DnD style fantasy rather than just my Majestic Wilderlands. The name will be Majestic Realms to reflect this.

This session featured Chris playing a fighter type, Ken playing a Burglar type, Dan playing a Fighter with a single spell, and finally Tim playing a mage. The adventure was an adaption of Brave Halfling's Ruins of Ramat.

The playtest rules featured a first draft of converted Swords and Wizardry spells. A character creation booklet with slightly more detail the most important of which was four character templates (fighter, mage, burglar, and priest) to use a base for character creation.

For preparation I mostly focused on trying to get the numbers right for the monsters. I found a  C++ program to simulate Fudge combat.  Plus I bought Hack-n-slash a Fudge DnD style RPG, along with a bunch of other Fate and Fudge supplements for fantasy. I found that the starting level I been using is probably way overpowered. But since characters were already made I decided to live it with for this session.

The basic fact of Fudge/Fate is +1 is a significant modifiers enough to turn a 50-50 contest into a 66  to 34 contest for the side with the +1 advantage.

The upshot is at the end the players agreed that 30 pt characters felt more like high point GURPS characters or high level DnD characters.

Here are the template I been using. 30 point characters.
Here is what 15 points look like as starting characters.

I will talk in more detail about the various elements of the characters in a follow up post.

Some Rough Notes.
Tim's use of spells went pretty much like it did in a Swords and Wizardry game. Only a handful of spells but when used often a game changer especially when the use of web saved the party from a pair of tentacle demons.

All the combat when pretty much as predict by the Combat simulator I wrote. The Skeletons didn't really stand a chance although injury was inflicted. The tentacle demons were going to be the toughest fight. The combat with the Huecuva went a little easier but Tim rolled really well on a Magic Missile taking it out in one shot.

The basic Fudge Mechanic is pretty solid and despite the greater number of rolls compared to Swords and Wizardry combat went fast.

Definitely need to run a lot of session similar to how the Dungeon Crawl Classics RPG was developed. Everytime I ran I found something either to add that was way better than the stuff I initially thought of or something that needs worked on.  For example I gave the players the option of holding over to the next round their number of successes in liu of trying to inflict damage.

The GM Side (and showing the tentacle demon fight) 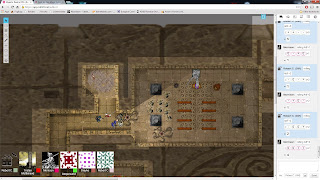 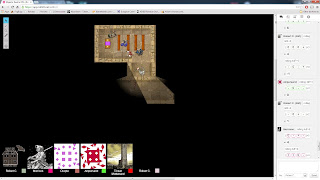 There is some work setting it up but the result it worth it in my opinion.

1. I really like the lighting effect. I am going to have to use it myself at some point.

2. I really liked the Fudge-based system. We had tactical options, but I didn't feel overwhelmed by choices and the +/- for each option was simple to understand.

3. I like the 15 point characters. I would probably also be stingy on x.p. awards, as a single point can really alter a character, unlike GURPS.