Heading to Con on the Cob! and trying out my game.

Off to Con on the Cob to fight some World War II, adventure with Labyrinth Lord, trying out the second session of the Fudge based RPG I am working on and most importantly hang out with good friends. 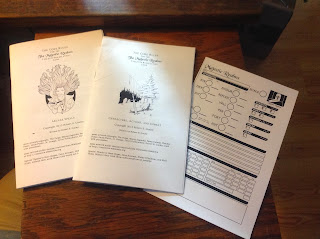 Despite appearances the game is no where ready for release. It just I been involved in publishing long enough that I have a bunch of ready made templates to use for prototypes. The content is pretty thin at the moment little more than lists of stuff. I did put some work into a character sheet because I find that helps novices understand a new system.
Posted by Robert Conley at 6:04 PM

Best of Luck, "see" you when you get back!

Looking forward to seeing in Menagerie of the Ice Lord.