Saturday saw the J-Squad return to Tegal Manor after a two year absence. 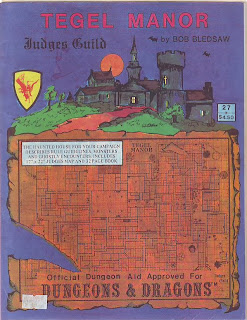 For those of you that are new, I been running a Swords & Wizardry campaign at the Gold Star Anime since 2010. The group has been inflict err playtested many of my Swords & Wizardry rules and adventures. I call them the J-Squad because most of the players names begin with the letter J. Tonight I refereed, Jay, Josh, Joe, Justin, along with Todd and my wife Kelly Anne.

Josh places a Thug, see Majestic Wilderlands supplement,  named Hazar and he happens to own Tegal Manor after buying it off of Sir Rump. The party managed to get through a third of the manor before getting side tracked onto other adventures.

And now they have returned. Marking this special occasion I pulled out the Dwarven Forge I recently got from the kickstarter.

Once again the party opted to enter through the main foyer and promptly encountered a Balrog. 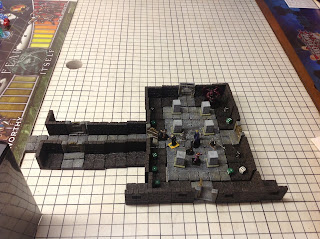 And it turned out to be a ghostly butler who attempted to put away their wraps. Hazar warned the newer members of the party not look into the portraits hanging on the walls. Note: I need to make mini portraits to hang over the walls. Hazar consulted his map and the party headed down the corridor to the left. 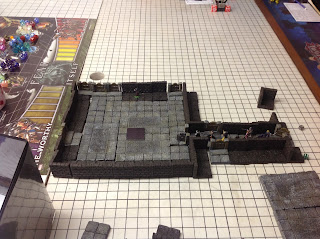 At the end of the corridor was a Iron Door, when opened it revealed the Main Torture Chamber of Tegal Manor. In the middle there was a 10' pit. After much discussion it was decided to send one of the hirelings down the shaft. The hireling cried out that that he sees the bottom and promptly start screaming. The rope goes taunt and then slack again as the screaming stops.

Joe's Fighter, Faramir, begins climbing down and sees an hungry ogre coming at him. After swinging past the ogre, Jay's charcter, Heimdell, a dwarven runecaster, lightning bolts the ogre. 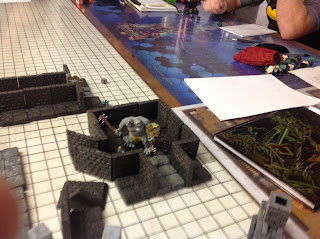 The party decides to explore the dungeon underneath Tegal Manor. And promptly runs into a 16th level Lich. I am not kidding when I say this was a completely random encounter. I rolled a 1 on a 6 sided and then a 39 on the random monster chart of Tegal Manor. 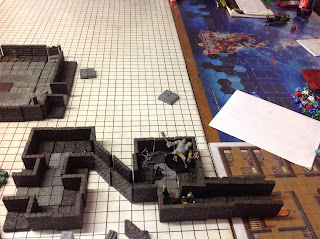 The lich fireballs the party killing Alia, my wife's character, along with Faramir and the two hirelings. Heimdell activates another lightning bolt rune and hits the lich who withstands the damage. It comes down to Justin's cleric who points his Wand of Polymorph at the Lich. I use Kelly Anne's baseball sized d20 and rolled a 3. Oh crap! The lich needs a 5 to save. Justin turns the dread lich into a kitten! With a mew and a swish of its tails the kitten lich scampers off into the darkness.

The party packs up the four bodies and head to Goodnap which has a Cathedral of Mitra and a cleric capable of Raise Dead. A week later they return to Tegal Manor and once again decide to continue exploring the second level. 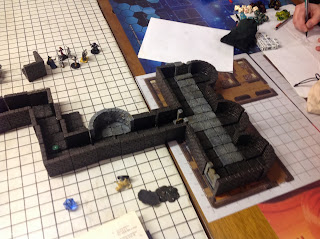 They managed to quick find their way into third level of Tegal Manor. They entered a strange room filled with plants and stone work folige. On closer examination the stonework is riddled with dozens of two inch diameter holes. Out of which poured a horde snakes. So many that I had to use my giant frog miniatures to represent all the snakes. 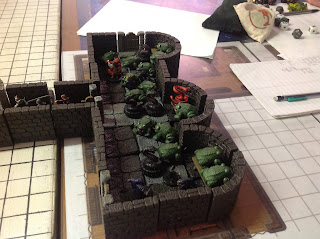 Nominally low HD creatures, the fight proved the adage that quantity has a quality of its own. That is until Heimdell activated his Conjure Fire Element Rune. 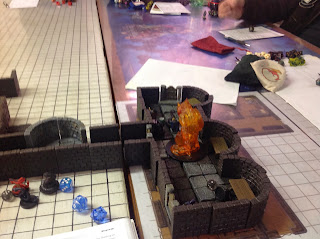 The resulting 16 HD Fire Elemental quickly cleared out the horde of snakes.

The party explored much of the third level. Discovering and unsealing the tomb of a vampire lord. Then promptly sealing it with a Wall of Iron cast by Heimdall. They have two hours before it come down to figure out what to do about it.

They fireball four ancient barrow wights who barely had time to move. And finally wound up meeting a mother spider and her brood. And that where we called it for the night. Below is a picture I snapped just after the encounter with the Vampire Lord. 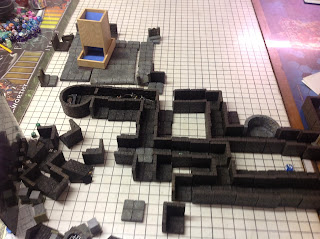 The Dwarven Forge was excellent to use. The main issue was the layout of the table. I need look at a different arrangement so that I can layout on two tables pushed together instead of three. Also I need to keep in mind where I am starting the layout from. I am used to not having much and tearing down after two to three rooms. During the session I was continually building out to the table's edge. Also I should have brought my resins because the Tegal Dungeons are mostly corridors. My one resin set has tees, corridor corners, and four ways.

As you can see I had some of the floor pieces painted as well as all of the doors. On Sunday I finished the remaining five big 4 by 6 pieces as well as 15 more 2 by 2. Only spent an hour painting after Friday's marathon. I laid out some corner and wall to paint.

The Porzony Paints are excellent to work with as well as the brushes he sent. I have to grab some more big brushes as I found it a lot more useful then I thought it would be. The doors are by far the more tedious pieces to paint. It is easy to get the floors, corners, and walls done.