Sailors on the Sea of Five Winds

Chicago Wizards talks about adapting Battlestar Galactica to the fantasy genre. He asks for ideas about running it as a sandbox. It just so happens I have notes for such a campaign.

My Majestic Wilderlands supplement is set in the year 4436 BCCC, three years after the Judges Guild start date. However my personal campaign is up to the year 4452 BCCC and there been considerable changes wrought by various players groups over the years.

One of was campaign that included Tim of Gothridge Manor and Dwayne of Gamer's Closet. Tim played Draco-lindus a mercenary captain, and Dwayne played William Enderil, a merchant adventurer type. During the course of the campaign Draco-lindus became a Duke of the City-State and wound up conquering the Kingdom of Antil with Overlord as an ally in 4442 BCCC.

Which brings me to the Sailors of the Sea of Five Winds. For past century the Kingdom of Antil played City-State against the Empire of Viridistan to maintain their independence. Now with Viridistan in the midst of civil war there no nearby power that can check City-State's ambitions. In short the Antillians are screwed and their way of life is about to come to an end. Their only hope is that much of the southern half of their Kingdom is only readily accessible by ship. And it going to take time before Draco-lindus and the Overlord to build enough ships to take the remaining strongholds. 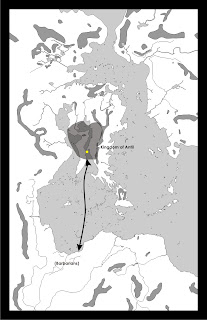 The surviving nobles, and refugees have come to the conclusion that there is no hope in remaining. To preserve their ancient heritage they will flee across the Sea of Five Winds and build a new home in the southern lands of the Wilderlands. But exactly where? Thus enter the player characters.

They will be part of an expedition across the Sea of Five Winds to find a suitable territory for colonization. Their initial target is somewhere along the shores of the Ament Plains. Between Antil and the Ament plains are several hundred islands largely uncharted. They have one year to establish a route and return. Then led the exodus to the the new land.

For those familiar with the Wilderlands (any version) know that the Sea of Five Winds has a dense concentration of islands filled with strange ruins, and unusual monsters. While the campaign has a definite three part structure, the exact shape of the journey is very much in the hands of the player characters.

Part I is the initial exploration and finding the safest route. The players have one year to do this as this is how long before everybody estimates Draco-lindus and the Overlord will have enough ships to conquer the southern half. They start at the citadel of Mysk marked with a yellow dot.

The voyage through the Sea of Five Winds which will involve much island hopping looking for anchorage and resupply points.

The exploration of the Ament Plains finding a suitable location for colonization perhaps an ally or two among the barbarian tribes.

The return voyage with possible complications caused by the initial passage.

Then Part II is the gathering of the rag-tag fleet. The main challenge of this will be the faction among the surviving nobles, priest, and refugees. The player characters will have unite them in the face of impending conquest. Then there is the second voyage across with possible threats from anybody in the Sea of Five Winds who don't desire the passage of the fleet.

Finally Part III is the landing and colonization of the Ament Plains. Dealing with a ancient threat that has long dwelled in the plains. Plus the fact there are already people here to begin with.

So that my idea for a Battlestar Galactica type campaign for fantasy.
Posted by Robert Conley at 6:00 AM

I am going to sit in the corner and whimper at the awesomeness of this idea and how great it would be to take part.

I will take solice in the thought that such great ideas can eventually only spark my imagination. Shame it appears to be out to lunch at the moment.

Moce over Neil. Theres room for two whimperers in that corner.

I believe the Malestorm exploding campaign would be better. The refugees would be everyone. The cylons would be demons. Then it could also travel across demensions. With mages being jump engines. The could even search for a lost tribe that fled form the last god wars and is rumored to have escaped to a utopia.