Over on the Flanaess Geographical Society facebook group, I noticed that Zach Henderson started to post a clean up of the original Darlene Greyhawk map. One of the things he did was to go through the map with Photoshop and removed all the hexes. A monumental task.

I realized that you could digitalize that version and make a crisp clean copy of Darlene's original Greyhawk map. I started talking with Zach and it turned out he broke up his work out into layers. We exchanged files and I started to digitalize the text, fills, and symbols.

Using a variety of tools managed to turn nearly everything on Darlene into a vector. This allow arbitrarily small or large maps to be made from the file. Plus you get a smaller file size for various resolutions.

I then added a few requested bells and whistles like 6 mile hexes, and a black and white version.

I was able to export as SVG file containing most of the map. The only thing that didn't come through are the forest and mountain drawings. The digitization of those layers did not translate well into a SVG  file. But I managed to export the rest and sort it into proper layers usable with the free Inkscape  illustration software and most other illustration and mapping programs.

The main file is a layered PDF. In testing this I found many PDF readers to be hit or miss on their ability to turn layers off and on. Adobe Reader definitely works.

Rob's Note: I been received errata on the map. I uploaded the fixed PDF. It is Rev 12b. Appreciate everybody who sent me errata on Christmas Eve.

Rob's Note #2: I applied more errata. Fixing up settlement symbols because of the lack of clarity in the original scan. Also restored the missing i in White Fang Bay. Finally I sorted out the issue with the mountain and forest fills in the SVG file. They are now present. The PDF and SVG are now Rev 12c. The JPGs been all updated.

Here is a jpg export of the full map.

Everybody have a happy and safe holiday and Merry Christmas to one and all. 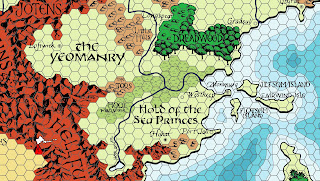 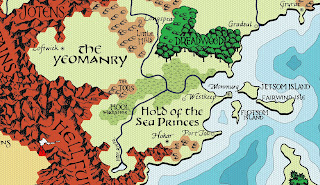 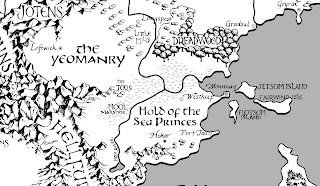 Greyscale version
Posted by Robert Conley at 10:37 AM 36 comments: