Collecting news and information about the OSR is often a thankless job. There is a ever-growing kaleidoscope of OSR publishers with new products being released every day either commercially or non-commercially on a variety of platforms and formats.

James A. Smith of Dreams of Mythic Fantasy has dedicated considerable time and effort into collecting various bits of information and news about what going on around the OSR. Now he would like your support to keep on doing this. He has established a Patreon page where you can contribute a few bucks every month to keep his OSR News continuing. I hope you will join me in supporting James. 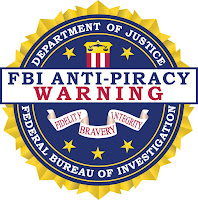 Busy News day. So I logged on my publisher's page on RPGNow and found a warning from OBS about a pirate website with hundreds of RPG PDFs.

A couple of things

Understand software, video, and PDF piracy is semi-organized. The new pirate site is especially slick which is probably why OBS reacted the way it did. However it existed at least a year prior. In addition there are various underground directories floating around that are updated regularly. The links are coded so that they don't show up on the search engines text functions. So the key is to keep those links off of the first handful of pages of search results. And that is not so hard to do thanks to the above links.

It sucks but it not as bad as it could be.

OBS just sent a newsletter to all publishers that due to little growth RPGNow is folding into DriveThruRPG in February 2019. That RPGNow links will redirect to their DriveThruRPG equivalent.

Also metal rankings will merge which frankly is a good thing overall as the separate counts were always a pain.

Starting in February 2019, all elements of the RPGNow tool pages and storefront will redirect to similar pages on DriveThruRPG.

You most likely know this, but since RPGNow and DriveThruRPG first merged as businesses back in 2006, they have shared all the same tools and digital inventory. On the front end, they looked and behaved like two separate sites, but essentially they have just been two faces of the same site for many years. The only real differences were the color schemes and logos.

You might have some questions about the coming change, so we’ve done our best to anticipate and answer them below.

How will this affect me?

In most ways, you’ll be unaffected. Your entire catalog of titles from RPGNow is already listed on DriveThruRPG (as it always has been), and you can log in to DriveThruRPG using the same account(s) you’ve always used on RPGNow, just as you could before.

Even your old bookmarks to pages on RPGNow.com will still work: They’ll automatically be redirected to the same page on DriveThruRPG.

What about sales reporting? Will my past sales be combined?

Yes, as far as sales records and your titles’ metal rankings, we will be merging those together.

Starting in February, your sales records will show combined sales of each title across both the deprecated RPGNow site and DriveThruRPG, together. The number of unit sales will also be combined, so if you had metal rankings for titles on one or both sites, there’s a good chance you’ll find that your rankings on some titles will have increased on DriveThruRPG.

What about my Publisher Promotion Points and marketing impressions?

No worries. Your Publisher Promotion Points (PPP) are already shared across sister sites. They are compiled by publisher, not by site.

If you have used your PPP to purchase site impressions for banners or featured product messages on RPGNow, you will also be reimbursed, commensurately, for those expenditures on DriveThruRPG.

Why is this happening?

Here’s the big picture: In the 12 years since RPGNow and DriveThruRPG merged, the growth of RPGNow has tapered off constantly, while DriveThruRPG has continued to grow strongly, year over year, since it launched in 2004. We’ve reached the point where RPGNow rarely draws new customers or publishers and sells less than one-tenth the volume of titles purchased on DriveThruRPG.

To be honest, we have known this moment would come for years now. We’ve just finally decided it’s time to put the RPGNow brand out to pasture.
Posted by Robert Conley at 8:13 AM No comments: 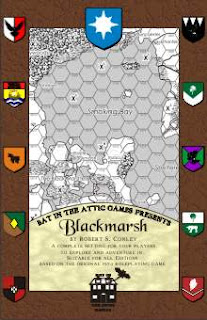 Several years ago, I added the option of using the Creative Commons BY-NC-SA license to Blackmarsh to make it easier for people to use it for RPGs that don't have open content. This was done with version 3.0. Since then Creative Commons updated to version 4.0. One of the major difference is an explicit waiver of moral rights.

In copyright over the past couple of decades there is the idea that in addition to rights to profit and control how the work is copied that there is a set of moral rights that protects the following.

The grant or transfer of economic rights (i.e. the right to copy and use) is separate than a waiver of moral rights. To make it clear that my intent is for anybody to be able to use Blackmarsh for whatever purpose they see fit I updated the Creative Common license to version 4.0 which waives my moral rights in the text and maps for Blackmarsh.

In addition several publishers have introduced third party publishing programs that don't use open content licenses. Since my intent to share Blackmarsh as widely as possible and to make it easy to use for one's own work. I removed the Non-Commercial and Share-alike requirements. Now only attribution is required.

To be clear dual license means you can choose to use either license. Either as open content under the Open Game License or the Creative Commons BY Version 4.0. Use whatever one works best for your project.

You can download version 11 either from my website. Or from RPGNow if you obtained Blackmarsh there. If you bought a print copy there is no need to get a new one as the text remains the same.

Posted by Robert Conley at 6:24 PM No comments:

In the mid 1990, S John Ross created an article about how to calculate the demographics of a medieval realms and the numbers and types of shops in a town.

The math behind the article was straight forward and didn't involve a lot of  table lookup. Although it didn't stop people like this one on the Donjon site, or this one on the d20SRD site from making automated tools using S. John Ross' math.

Medieval Demographics was hosted on S. John Ross' Blue Room for a long time. Recently he made changes to his website resulting in the original links becoming broken. As outlined in this blog post, he decided to run an experiment, to release the file to multiple hosts and let it wander on its own. He asked for volunteers and I was one of the people who stepped up.

So today I am pleased to announce that I am hosting a copy of Medieval Demographics for everybody to download. You can use the sidebar or this link.

To be clear this file is only free to download. It has not been made public domain nor has it been released under an open content license. The details are explained at the bottom of page 6 of the PDF

Fantasy Demographics
Several years ago, I dug into the data and math used by S John Ross and found the original source of the data he used to generate shops for his town portion of his article. From the that I generated my own take that fits better with the fantasy medieval setting used by various editions of DnD. You can download that file from the sidebar or from here. Note is only for the types and quantity in a town.

Accuracy
Keep in mind both Medieval Demographics and my own Fantasy Demographics are not meant to definitive treatments of historical circumstances. While neither sits on home plate, so to speak, instead they are meant to get you within the ballpark. Keep in mind the algorithm i.e. the process that S. John Ross uses is highly modifiable to fit your assumptions of medieval or fantasy life. For an example see my Fantasy Demographics article mentioned above.
Posted by Robert Conley at 8:41 AM 8 comments: