Everybody should have a Kickstarter message from me in there Kickstarter inbox with the codes for their reward level. Around forty haven't said one way or the other that they gotten their codes so I have just sent out an email to those individuals.

If you have answered the survey with no that you haven't gotten the codes from your update. Then look for that email or look in your Kickstarter inbox for the codes. In either case if you could let me know I would appreciate it so I can update the records indicating that you received the rewards.

So far people seem to like the rules and the cards. I have seen two reviews so far and I did a interview about the Majestic Fantasy Basic Rules.

A Land Beyond Beyond Interview

Thanks to Jon Salway for writing both of these.

Thanks to Chuck for writing this.

I been notified that the printer for DriveThruRPG is discontinuing saddle stitched books as of March. Blackmarsh uses this format. I will be switching over to a different print format by the end of February once I gotten more details of the switchover process. Likely it will be a digest sized book of 24 pages in softcover and hardback. I may try using a card format as well. I will keep folks posted.

I also found that the price was incorrect it is $3.80 not $3.50. Printing cost change over time and apparently .30 cent was added to the cost since I first did the estimate for the Kickstarter.

I had Matteo M. on the discussion tab on the Majestic Fantasy RPG page at DriveThruRPG ask me this question.

Are we going to see the eXpert version of this game?

The "expert" version is going to be a series of supplements. I realize it will be a little different so there some risk it won't work out.

The next one up* is the Lost Grimoire of Magic while will have the complete details of the Magic User class, and Spells. along with some useful aids and procedures centered around magic users. There will be supplements covering Fighters, Rogues, Clerics, Monsters, NPCs (two volumes), Equipment, Treasure, and Magic Items. Finally a book around sandbox campaigns, refereeing, and various useful aids.

The point of doing it this way is that in my experience most people start out with a system and then kitbash stuff they like from other similar systems. I am aiming not only to write a quality RPG, but be a first or second choice when people kitbash their campaign. Hence breaking down it into supplements that work on their own.

*My next project will be getting the Wild North out and after that I will finish up the Lost Grimoire of Magic. Both will be Kickstarter project due to their art or editing requirements. The rules are finished and playtested, but the organization and supplemental material still remain to be written.

Once thank I thank everybody backing this project. Your generosity is appreciated. As always if you have any question or issue feel free to reach out.

I participated in a discussion about how the game plays in tabletop roleplaying. The following is probably not constructive for the conversation but it does sum of my view of what make RPGs, RPGs, and why they are so different than boardgames and wargames.

While the following is a specific series of steps, the circumstance they can be applied too is nearly infinite. Also it can turn on a dime if the circumstance the referee describes changes. Whether that change follows from what the player did a their character is sometimes debated but it still implies an inherent flexibility that all RPGs possess. 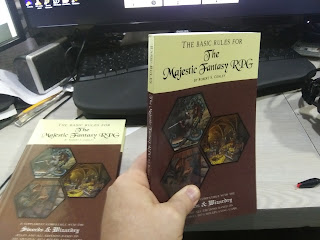 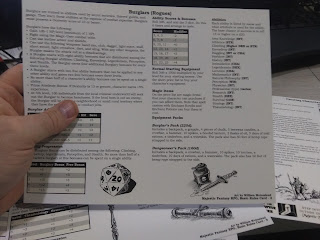 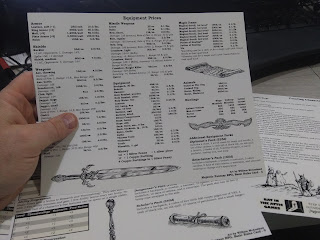 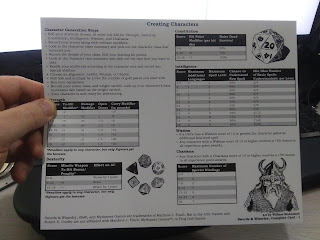 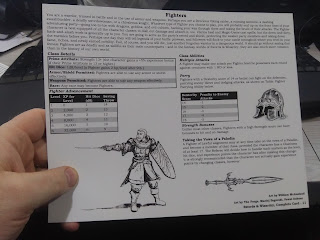