When I got my Dwarven Dungeon Accessories I went wow my other stuff kinda of sucks now. Then Chicago Wizard had a bunch of posts on him painting miniatures. Luckily for me I still had most of my original Grenadier along the boxes are long gone. I think some of the foam I use to line my storage cases is still vintage.

This is basically what I used for the last 25 years for dungeon props. A long time ago I picked up a bunch of resin and plaster furniture and used them ever since. 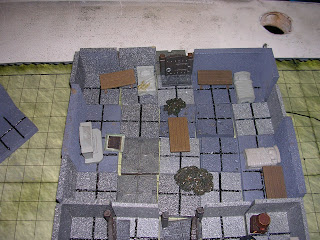 So it time to break out the paint brush after a twenty year hiatus. Amazingly about 2/3rd of the paints I had stored were still good enough to use. Although all my metallics are were done for. Thanks to the ongoing craft fad Jo-ann and Wal-mart had a variety of inexpensive acrylics to stock up with. I also snagged a set of generic brushes from Wal-mart and some nice detail brushes from a model/art store in my town.

Then it was down to business. I focused on the stuff I used the most figuring it give me the most bang for what little time I can spend doing this.

First I painted up a bar set I had forever. Note that the tables are from Mage Knight. If you ever run across these get them. They are durable and look good. I uploaded the full resolution picture so you can see the details. 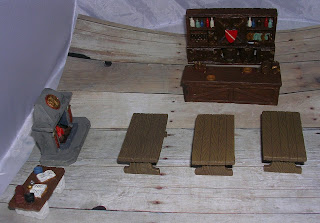 And would you know it the flash revealed some areas I missed behind the barrels. I also painted a resin fireplace. Once neat think was the detail on the flames which I had to be careful with. Painting flames was a challenge as I never done it before. I started with a layer of red. Then a thin layer of orange letting it pool and finally a dry brushing with yellow.

The desk on the left is more recent. I think needed to use a more yellowish white for the paper. The text was done by painting thin lines across the page and then putting two or three small gaps with white. I didn't try to totally white out the line. The smudged remains of the black enhanced the illusion of text. 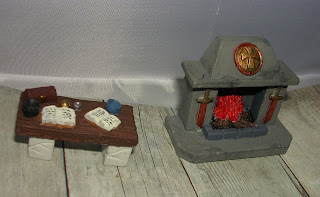 Next I did some of my "official orcs". At one point I got over a dozen similar orc figures and they became my generic orc horde. Now they are getting some color. Later I pulled out all my plaster firepits and p

A closeup of the orcs. I guess I nailed the skin color as a lot of the gamers at the last Gold Star Anime session were complimenting on how orcish they looked. I used a drab light green mixed with a small amount of brown. Of course my campaign being the Majestic Wilderlands and the City-State these guys had to be from the Purple Claws. 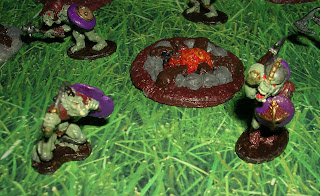 The first figures I did was three of my "official peasants" figures. I got nearly two dozen peasants in storage. One the table are three plaster barrel things. Never figured out what they were supposed to be. So I painted them brown, gave them a rock gray base, and a brass rim. Over on the left is a brazier I painted. I actually started it in the late 80s but never completed it. Now it is tone. Finally I painted the five resin full beds. I debated what to do with the folded blankets. Then I remember the blanks the Happy Whisk gave to my boys two years ago and made them double sided quilts. I took the top color and added white to form the second shade. The bed on the left was a bit of a challenge as it had straw from it's mattress sticking out all over the place. Finally there were the three chests I painted. Two are plaster and the last is a metal miniature from somewhere.

In all this took about eight sessions about three hours each. With a session a week. Right now I finished prepping the remaining "official orcs" and two more tables with food modeled on the top.

As for my writing, I been somewhat more regular. Not as fast as I like but getting a solid three hour session a week in. The painting has been surprisingly enjoyable and I plane to continue with it.

Could use any tips you got so feel free to comment.
Posted by Robert Conley at 6:00 AM

Props look great Rob, but some how I don't think you meant you were playing hokey, because I've never know you to ice skate especially in the summer, but it was funny to read. Have fun at RPG Day. Use the kids to get stuff. They might as well be used for something. muhahah

Wow really nice work! Accessories and furniture and the like can really add enhancement to your battle maps. How are the players liking them?

And keep it up, paintin's fun!