The end of a campaign

Unfortunately Rusty has too many family issues to commit to a weekly gaming session much less be a gamemaster. So we ended the Castles & Crusades campaign after the completion of the first Splinters of Faith. We did quite well and each of us had an important contribution. I, playing an illusionist, was damn lucky to have used my Prestidigitation cantrip on turning the key in the lock of a chest. It turned out to have a poison dart trap. Later when we emerged from the dungeon, Tim, playing a Bard, and me convinced the bandits outside that a pair of pewter goblets was the "big" treasure that was found. 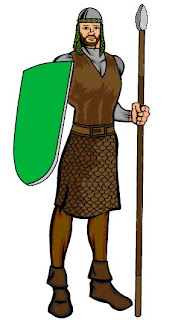 So now Tim is going to referee City-State using GURPS. I had a 100 pt character named Paltar Longshanks that I made up earlier. Using the Archer template as a starting point, I created a all-around fighter type that is handy to have in the wilds. He wields a spear, shield, and longbow. I had to fuss around with his armor given my limited budget. Wound up with a Medium Shield, a pot helm, a thick leather tunic, mail sleeves, a studded leather skirt, and heavy leather leggings.

Given that Dwayne made a mage of the Guild of Arcane Lore (a conclave of the Order of Thoth), I made Paltar a bodyguard in the guild's employment.

If you are interested in his sheet, you can download it from here.
Posted by Robert Conley at 6:00 AM