My day at Origins

It was a great experience and the $5 day pass was the right price.

The day started at 6:30 am with Tim coming into the driveway. I wasn't sure what to expect so I packed my roll on kit with my swords & wizardry books, binder, dice box and my netbook. Figuring that we may have a chance of running a game at the open gaming table. In the prior conventions I had considerable down time. I knew Origins was larger but figured we go through the exhibitor with time to spare. Little did I know.

Tim and I drive there in record time, 3 1/2 hours. Along the way he helped me do a first pass on what I wrote on the Scourge of the Demon Wolf. Arriving at Columbus we ran into construction and a detour to the convention but we popped out right next to a parking garage. We find a space the first turn after the entrance.

We some gamers parking so we followed them. We made our way through a skywalk, we blew some search rolls at various points but successfully made our way into the convention hall. We saw a stream of gamers moving into the hall, the closer the denser the tables of gamers gaming became.

We got in line and within 5 minutes had our day pass. I have to say that Origin's day pass is a great deal. You don't get access to any game events but you can participate in the other activities and best of all get to roam the exhibitor hall.

The exhibitor hall is enormous! We decided to methodically work the hall by going up down each aisle roll from front to back. The Troll and Toad booth was in front of us so we went there first as I had my copy of Dune RPG with me. I didn't get the offer I was looking for so we headed to the far aisle. We spotted the Gamescience booth so we made a beeline to it. I got to talk to Lou Zocchi. He is a great guy. He didn't do his spiel but he was glad that I was a licensee of Judges Guild.

In addition to all the dice he had a ton of Judges Guild stuff. He told me how he made a deal with Bob Bledsaw Sr and for payment he took a cargo crate of product and the right to reprint a handful of items. Because of this deal not only I got my second set of sapphire Gamescience dice, I was able to pick up TWO pristine copies of the map for the City-State of the World Emperor, Viridistan, unmarked! Tim picked up a set of Zocchi Dice.

The first aisle we hit had Crazy Egor's, who had a ton of current and old gaming material. I still didn't get the price I wanted for the Dune RPG but it did find decent copies of the old Harnview and Harndex. Mine have long lost their covers and even have a few pages torn. Now I have some good copies.


Heading down the aisle we stop by the side Chessex booth, there they have a big bin of dice where you buy dice for 30 cents, buy a mug, or a even a pitcher. Kelly Anne wanted me to get some interesting dice and I found some interesting two color d20s. We stopped later at the other side of Chessex where I got her some pink dice to use in the Gold Star Anime campaign. Plus some at Crystal Caste. In addition in my Origin's bag there were three tiny d20 (only marked 0 to 9) 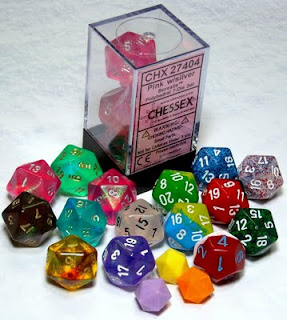 Continuing down we stop at Acheson Creations. There they had a ton of resin props. I picked up some fences, log barricades, Chest Piles, and other stuff. Also they have a line of miniatures called Primeval Design. It has 25 mm dinosaur, prehistoric mammals, and present day animals. I picked a package of bears, a major category of animal I was missing. I also picked up a package of five wolves. He has some great fullsize (25 mm) resin dinosaurs.

At the end of the first aisle was Politically Incorrect Games, Tim saw hooker dice for sale, they were sort of interesting with two dice with different suggestive silhouettes in place of the one. He didn't get them.

Coming back up the second aisle we stopped at Chessex and then at the end of the aisle there was Dungeon Decks. They are also lead the Game Publisher Association. We got useful information about both. The Dungeon Deck is very interesting and the cards include a small but complete dungeon maps that work with dungeon tiles or dwarven forge. They have a Camp Encounter deck they are releasing at Gen Con which I am going to snag. Basically it is a deck to use when the party encamped. Something that I would like to make more interesting. (insert evil laugh)

In the third aisle Chimera Hobbies had a wall of books including copies of my Thieves of Badabaskor and Points of Light II. If you see them at Gencon buy some. In the next two aisle I picked up some more resin miniatures including a full scale bridge and a bookcase. I like to collect props that I can throw together to represent an encounter in a medieval fantasy world.

In the third aisle I got to talk to Steven Chenault of Troll Lord Games and Tom Tullis of Fat Dragon Games. Both are great to talk too and was able to correct Tom's lack of a copy of Majestic Wilderlands. I was impressed that he makes all his dioramas by using an old fashioned ruler and protractor.

We ate some lunch and I stopped at a booth where they had D&D Miniatures. I was a bit disappointed in the selection. Obviously people picked through leaving only the unpopular models. However I did find a ton of giant beetles and got ten of them. I will use them for mass insect encounters.

I told Tim I will be there awhile, when he came back he told me he lined up a game of Tunnels and Trolls with Ken St. Andre. Now Tunnels & Trolls, is a RPG that I normally play but when Ken St Andre is offering to gamemaster a game you just leap in. What was a bummer that he actually had trouble finding players leaving only Tim and I in the game.

Tim played a human fighter and I played a human wizard. The session was a ton of fun. What was best was listening to the enthusiasm that Ken has for his setting Trollworld. It is off-beat and a bit zany and I could tell why a lot of people had fun with it over the years. Now that I played Tunnels and Troll I can understand it's appeal. I have to admit it's system of ever increasing stats is nifty.

The dungeon itself involved a lot of puzzle and traps. Tim and I are not the greatest at this. Our strength are mostly in the roleplaying department. But we struggled through with some help from time to time from Ken. Tim became stoned, then a dwarf, and at the end he weighed over 8,000 lbs. Ken said that the heaviest dwarf he had ever seen.

We hit the Kenzer Co both where I got the author of Hackmaster Basic to sign my book. Everybody was nice and Jolly Blackburn was great at answering my questions about the parts of Hackmaster combat I didn't understand. I also picked up four back issues of Knights of the Dinner Table that I was missing.

We wrapped up the trip by eating at this place called Grandma's Kitchen or something similar. Their steak was great and tasted just like it was cooked on a backyard grill. A good backyard grill. Tim had the best apple dumpling he ever tasted. We got home at 11, tried but pleased at completing one of the best convention trips ever.
Posted by Robert Conley at 6:00 AM

This all sounds accurate except that part where you said, "We ate some elf". I have no memory of this, but was that why the pizza was so damn expensive?

Thanks for the catch. I think you were talking about your elf character when I was typing that.

you can get a bit more information on Primaeval Designs Miniatures here: